David Ortiz has a vague timetable, Felix Doubront might not know how to improve, and Xander Bogaerts is still a shortstop

The news is not great on David Ortiz, nor does it clear up very much in terms of when he'll be back. Jon Heyman reported on Twitter that the "hope" for Ortiz's return is mid-April -- which we could have guessed on our own given the language coming from the Sox of late -- but that May 1 might be more realistic. Heyman also adds that Ortiz hasn't swung a bat in eight days because of the inflammation in his heels that seems to be a cascade issue caused by the initial Achilles problem.

With that now out there, it's no wonder the Red Sox are still considering bringing Jackie Bradley up to start the season. However, with such a vague timetable in play, it would be dangerous for Boston to bring Bradley up before he has accrued 11 days of minor-league service time, as it would make the possibility of missing out on another year of team control all the more likely.

The more sensible route, given that, is to have Bradley begin the year at Triple-A -- a step up from where he ended his 2012 -- and to roll with Jonny Gomes at designated hitter, with Daniel Nava the primary left fielder. If the Red Sox want to leave Lyle Overbay on the 25-man roster rather than let him opt-out, he could play first base against right-handers if they would rather not use Gomes against all opponents, with Napoli slotting in at DH in those contests. If they prefer Carp, the same setup could be used, albeit with Carp at DH since keeping his glove out of the lineup when at all possible makes sense.

Jackie Bradley Still In Red Sox' Opening Day Mix, But Should He Be? 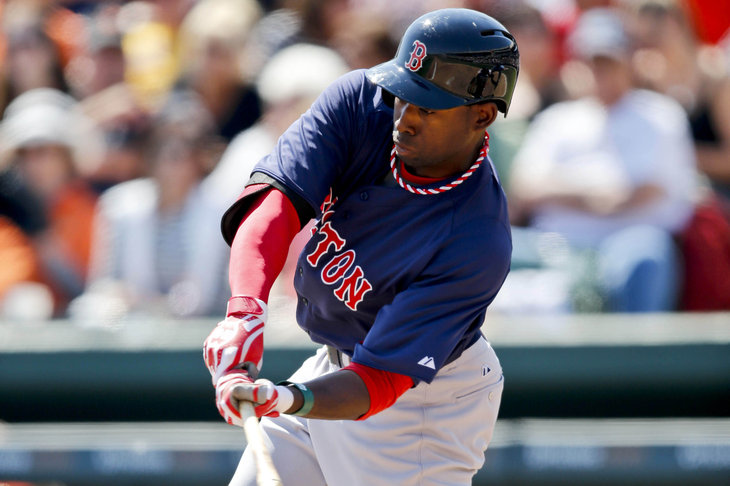 The Red Sox have more to gain by being patient with Bradley to start 2013, despite Ortiz's absence.

After that, if mid-April turned out to be too ambitious, that's when the Red Sox can make the call to Jackie Bradley, and slot him in for the rest of April, and maybe even beyond as well, if he's earned it with his performance like Will Middlebrooks did in 2012.

That's a whole lot of hypothesizing, though: the main bit to take in at the moment is that the Sox are not quite sure when their best hitter is going to be back, and that could be a problem if it turns out to be a problem for more than the season's first month unless someone steps up and plays over their head at just the right time.

Felix Doubront has great stuff, but he didn't always know what to do with it during his first season as a regular rotation member. He tried to be too fine at times with his fastball, and it inflated his pitch counts and kept him from being efficient or able to put much length into his starts. The good news is that Doubront is aware of his most-significant stumbling block. Via Tim Britton:

"I know I can throw all my pitches for strikes. I have that ability now that I didn't have before," the left-hander said. "I don't have to try to throw a two-seamer to the corner; it's hard to do it. I don't have to be that perfect to get an out. Just throw the ball around the zone with all my pitches, get quick outs and be more in the game."

Doubront isn't full of it, either. His problem with walks and inefficiency wasn't a control problem, so much as, well, what he said: trying to be perfect. Hitters fouled off pitch after pitch when it didn't go exactly where Doubront wanted within the strike zone, when what he should have been doing was utilizing his secondary stuff to induce swings-and-misses. Lets classify Doubront's problem as a much lesser version of what torpedoed teammate Daniel Bard's attempt at starting. And, at the same time, hope he's aware of how to move past it by actually utilizing the rest of his repertoire rather than trying to be too fine with that fastball.

Earlier, it was reported that Xander Bogaerts was headed back to Red Sox camp, and that he would see some more time at third base now that the Netherlands were eliminated from the World Honkbal Classic. Manager John Farrell said it was to get Bogaerts more at-bats -- more positions available on a given day means more opportunities to play -- but thanks to a story from Sean McAdam, we have some more context from Farrell:

"But make no mistake, he's still, in our eyes, a shortstop."

What a difference a year makes. The fact Bogaerts has progressed defensively at short a bit more than expected, combined with his bat propelling him through the system at unexpected speeds, has made it all the more likely he'll stick at the position for at least a little while in the bigs. He'll have to get there first, of course, by continuing said impressive trajectory.

One last thing: the Red Sox and Yankees spring training game on Wednesday, scheduled for 1 pm eastern, will be broadcast on ESPN2 as well as WatchESPN. The Sunday Night Baseball crew will call the game.