John Lackey's 2011 season was arguably the worst ever by a full-time Red Sox starting pitcher. However, there was good reason for that: his elbow was an issue all season. At first, the Red Sox and Lackey attempted to get by the injury with a cortisone injection, and that worked for a time. By season's end, though, there was just too much damage to consistently and effectively pitch through, and Lackey ended up going under the knife, Tommy John-style, to repair his UCL.

The extent of the damage was not known until after the season, but even with that knowledge, too many losses had gone against Boston in Lackey starts for many fans to accept that as an excuse for a poor performance. Remember, as much as you might not want to, that this was the season Boston finished just one game out of the playoffs after a disaster September. Yes, Lackey's season helped put them in that position, but given the lack of starting pitching depth for much of the year, especially in the second half -- a problem that saw the likes of Kyle Weiland and Andrew Miller placed in the rotation for a time -- it's hard to blame Lackey for trying to tough it out, especially since it's not on him to trade or sign a replacement.

That's all behind Boston and Lackey now, though. Lackey's elbow, presumably, is in the best condition it's been in for years, since things finally deteriorated to the point where surgery became an option. He's not having a great spring, but that's not exactly a harbinger of anything -- it's just spring training, he hasn't pitched in a game that counts since September of 2011, and so on. The important thing is that he has no setbacks with the elbow, and to this point, just under 18 months out from the operation, that's been the case.

How Will John Lackey Pitch After Tommy John Surgery? 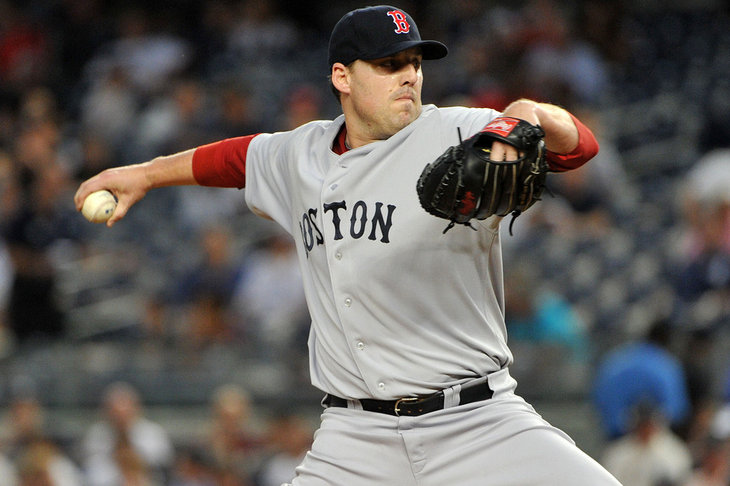 A look at recent, comparable pitchers who have undergone Tommy John, and their results after the procedure

With a healthy elbow for the first time in years, what can Lackey do? Expecting him to revert to the form he had prior to his Red Sox career is a tad on the optimistic side, but something along the lines of what he achieved in 2010, his first season in Boston, isn't out of the question. While Lackey's ERA was a bit bloated that year, his FIP -- which removes defense from the equation and is based on peripherals -- was better than average, and he still managed to throw 215 innings. By Fangraphs' count, that made him a four-win pitcher, while Baseball Reference -- which values only what did happen, and not what should have -- clocked him around two wins, like he had been in his last year with the Angels.

Fangraphs' method isn't always the one you want, as there are reasons why a pitcher might not have an ERA that matches their FIP that has more to do with them than luck. For instance, Lackey's slowly deteriorating elbow condition could have subtly and negatively impacted his command, helping to inflate his batting average on balls in play. For 2013, however, that's not a significant problem: if his elbow is better, and his command doesn't take too long to come back to where it should be, then he can likely replicate 2010, if not just in terms of ERA, then possibly by FIP, too. That would make him an average or better starting pitcher, something the Red Sox have needed in the middle of their rotation for the past few seasons.

It's to be seen if he can actually do that, but given the condition his elbow was in last he pitched, and looking at what other pitchers of a similar age have done after their own surgeries, Red Sox fans should feel good about his chances. From an article on this very subject, published here in January:

The general picture drawn by these pitchers is one where command takes a little time to come back, but overall, things shake out for the positive. The fact Lackey is returning to the mound with more recovery time behind him than most should be a bonus for him, as should the regular off-season of preparation that seems to have improved the production of the bunch. Expecting the surgery to turn him into an entirely different pitcher is asking for too much, but if you're thinking it will bring him back to where he was before the serious elbow problems of 2011, that seems like a reasonable expectation as early as April. If that's the case, and Lackey can produce another 2010-type campaign, that's one less question that needs answering in Boston's rotation.

Lackey is paid more than any other Red Sox pitcher, but the time for being angry about that has passed his career by. At this point, he is what he is, as is his contract. The Red Sox won't be able to move either of them unless Lackey can rebound, and if he pitches like he did in 2010, they might not want nor have to, given their trouble with having a steady and reliable rotation of late.

He's not a popular player with the fans, but if he produces, that shouldn't matter: if anything, Over the Monster readers should know the only important question is "Can he pitch?" The history of Tommy John recipients is on Lackey's side when it comes to his chances to do just that, and that's good news for the 2013 Red Sox. And probably our collective blood pressure, too.