Jackie Bradley Still In Red Sox' Opening Day Mix, But Should He Be?

Should the Red Sox use Bradley in left with David Ortiz expected to miss time?

Share All sharing options for: Jackie Bradley Still In Red Sox' Opening Day Mix, But Should He Be?

According to manager John Farrell, prospect Jackie Bradley is still a possibility for Opening Day with the Red Sox. While this was waved off a few weeks ago in terms of being likely, the fact that designated hitter David Ortiz is now a possibility to begin the year on the disabled list changes everything. There is a very real chance that Bradley could be the team's left fielder for a time in 2013, with Jonny Gomes slotting in as the DH in Ortiz's absence early on.

However, it's not likely in Boston's long-term best interests to go this route. As Tim Britton pointed out last week, with Bradley not yet on the 40-man roster, he only needs to spend 11 days in the minors to add an extra year of team control to his contract. If he were to come up on April 12 and then never go to the minors again, he would be in town through the 2019 season. Were he to come up for Opening Day and spend the entire season with the team, he would be a free agent after 2018 instead. As Bradley will presumably be in his peak years as a 29-year-old in 2019, it's worth waiting less than two weeks to ensure that he's around for a whole extra season of team control. Especially since Bradley is with Scott Boras, who represents soon-to-be free agent center fielder Jacoby Ellsbury, the man Bradley is expected to replace in a year -- the chances of signing Bradley to an extension that renders the 2019 point moot are slim given that representation, or, at least, slimmer than they would be otherwise.

A look back to the last top Sox prospect to make it to the bigs provides a few important points. In 2012, then-manager Bobby Valentine wanted Will Middlebrooks to be his third baseman, but the Red Sox still had Kevin Youkilis under contract, and with an option for 2013. It's not that the Boston front office was opposed to the idea of Middlebrooks in Boston, but with Youkilis on board, there was no need to push the issue. Additionally, Middlebrooks had barely played in Triple-A (and did not play well when he did), and by the time he would have a bit more seasoning at the level, his free agent clock would have pushed past 2018 instead of 2017.

Between a Youkilis injury and Middlebrooks' excellent start at Pawtucket, he made his way to the majors in time to debut on May 2. He got the extra experience against upper-level competition the Sox wanted him to, they got the extra year of team control, and they also found out shortly that, should they find a suitor for Kevin Youkilis, they had their new third baseman of the present, too.

Bradley hasn't played in Triple-A at all, and has just 61 games at Double-A to his credit. That's not to say he can't step in to the majors now and contribute, but, like with Middlebrooks, the issue doesn't need to be forced out of the gate. If, by April 12, Ortiz remains out and things aren't looking good in that regard, the Red Sox know they can safely go with Bradley and still have him past 2019 despite his early introduction to the majors. In fact, this might even be their best route going forward so long as Bradley plays every day, as it would the Red Sox their best defensive outfield -- Bradley in left, Jacoby Ellsbury in center, Shane Victorino in right -- while putting to rest the question of just which outfielder with a hole in their game will pair with Gomes, who himself has issues that make him fit in a platoon role. Projection systems like Bradley to be able to hold his own at the plate as a 23-year-old rookie, while his glove has been rated among the game's very best in the minors. He could definitely contribute defensively, and if he hits as well, then the Red Sox are likely a better team for having him.

The Cult of Jackie Bradley 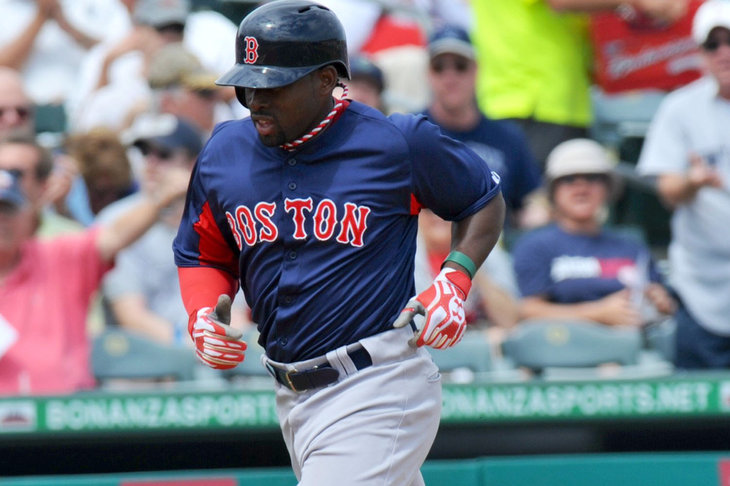 Given that, why not just bring him up beforehand, though, and send him down to the minors once they are finished with him, when Ortiz returns and Gomes can go back to left? Red Sox fans should know at this point, after the last few years, that sometimes things just don't work out that cleanly. To go back to Middlebrooks again, he was only supposed to be up temporarily, for the extent of Youkilis' stay on the disabled list. However, then Boston's outfield situation took a turn for the injured, and they ended up doing things like moving Youkilis to first, keeping Middlebrooks at third, and playing Adrian Gonzalez in right field. By the time that situation had sorted itself out, Middlebrooks was hitting, Youkilis was not, and a trade was made to give Middlebrooks the hot corner to himself.

It's easy to envision Bradley ending up in the same kind of endless loop. Ortiz could turn out to be injured for longer than expected, and by the time he comes back, maybe Jacoby Ellsbury is out again, making Bradley's presence more necessity than luxury for a team hoping to compete. Maybe the chance to send him back down never comes up due to fluctuations on the rest of the roster, and that extra year never comes to be because of it. Even if it does come up, rather than just 11 days, it would need to be 20, as he would then be on the 40-man roster, changing the rules.

That would be fine for Bradley and even the Red Sox if he spends the first nine games of the season in the minors first. He can come up and, like Middlebrooks, play his way into never being sent down again. That's why it's important to just give him the first 11 days of the season in Triple-A Pawtucket, get that concern out of the way, and then let Bradley play himself into whatever role he deserves, or the Sox happen to need, as of April 12.