Pedro Ciriaco will drive you crazy at the plate, but slap a glove on him and just enjoy his work

The headline above has a bit of double meaning to it. The first meaning is attached to Pedro Ciriaco himself, as he requires patience -- he is, at present, without any. The second meaning, now that we know Ciriaco is going to be around for at least the start of the 2013 campaign, has to do with the patience required to watch him at the plate. Ciriaco is an endlessly frustrating hitter, because he can do some pretty nifty things with his swing. The problem is that he even more often looks as if he has no idea what he's doing, leaving all of his value as a major-league baseball player within his glove.

That's not a terrible thing, in the sense that Ciriaco's job is to be a bench player that can give the likes of Will Middlebrooks, Stephen Drew, and even Dustin Pedroia some innings or games off when necessary. The problem is if another situation arises where he needs to be more than that, such as in 2012, when injuries forced Ciriaco to become central to a disappointing plot.

Pedro Ciriaco And Not Having A Plan At The Plate 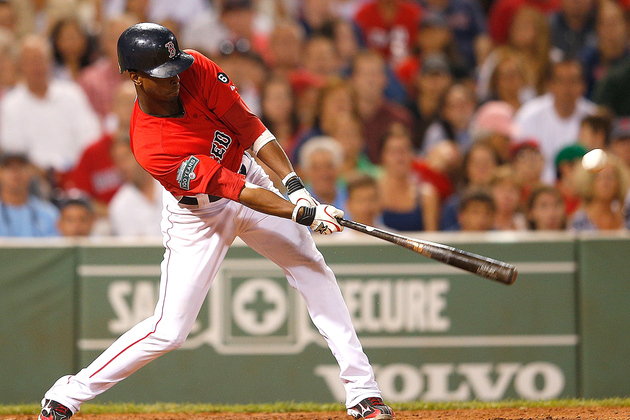 This isn't hyperbole at all: Pedro Ciriaco just kind of does stuff

Ciriaco is just 27, so it's easy to believe he can improve and become a more patient, more nuanced hitter. That's likely pushing things, though: sure, you get your Melky Cabrera or your Carlos Gomez that can turn things around later in their career, but they are more exception than norm, and also needed less to go right than for a complete overhaul of everything they've ever done at the plate in order to produce. Ciriaco has over 3,800 plate appearances as a professional baseball player, and has walked in just over three percent of those times up. He has little power, doesn't wait for a pitch he can drive, doesn't make consistent contact, and relies almost entirely on guesswork that occurs at the same time as a mistake from the pitcher. There's a non-zero chance he can turn it around, but you can take that bet, I'm good.

That's not the same thing as saying Ciriaco is without use, however. Boston currently has a couple of ultilty infielder types that could maybe hit a bit in the majors -- Brock Holt, Drew Sutton, and they let Ivan De Jesus go in the trade with the Pirates during the off-season. What they only have in Ciriaco, however, is someone who can be labeled as a versatile defender for reasons other than his ability to not totally embarrass himself at multiple positions. Ciriaco has a legitimate glove at shortstop, is more than capable at second, and showed progress at third as the year went on. He might not be Jose Iglesias defensively at the position -- hey, no one is -- but if Stephen Drew's concussion symptoms were to persist during the early part of the year, Ciriaco could more than hold his own at shortstop without Boston having to interrupt Iglesias' development at Pawtucket.

His bat keeps him from being a long-term solution anywhere, even at shortstop where the offensive bar is incredibly low, but as a fill-in and the guy meant to give infielders the occasional breather or pinch-running moment, Ciriaco can handle himself. It's not the sexiest role, and might be just a step above that of a lefty specialist in the bullpen, but the Red Sox and their fans know as well as anyone that sometimes these guys come in handy. He's someone they can upgrade on at some point, but until then, he's cheap, a proven commodity on defense, and at least every now and then accidentally makes himself look good at the plate. If only the latter happened with more frequency, he'd be the perfect bench infielder. Alas, you can't always have everything.