Wes Welker signed with the Denver Broncos, leaving Patriots fans looking for villains where there are none. Can Red Sox fans avoid falling into that same trap?

One year from now, Jacoby Ellsbury will likely be playing for another team.

Even as we fans enjoyed his rampage through the league in 2011, we understood what it meant for his career with the Red Sox. There he was, a speedy 27-year-old center fielder playing MVP-caliber baseball, and Scott Boras was his agent. The Sox, meanwhile, had just committed around $40 million a year to Carl Crawford and Adrian Gonzalez. It just wasn't going to happen.

Now, of course, Gonzalez and Crawford are gone, but with their departure comes a new organizational philosophy which does not seem to mix with a massive contract for Ellsbury. Of course, Ellsbury needs to perform in 2013 to get said massive contract, but given how much money the Braves and Indians are paying Michael Bourn and B.J. Upton not to hit, chances are he doesn't have to perform that well to price himself out of Boston.

I bring this all up because last night Wes Welker, the most productive wide receiver of the New England Patriots, signed with the Denver Broncos. While the writing wasn't quite as clearly on the wall as with Ellsbury, anyone who has followed the Bill Belichick Patriots over the last decade knows that no star is safe when their time comes for free agency.

With sports fans, there's a tendency to go too far dramatizing everything. As is, we obsess over what is, at its core, a game. There's nothing so wrong with that, but given that the industry is built around making a big deal of everything as a matter of course, it's easy to fall into the trap of forgetting that this is the real world, and that not every story has a villain.

When Welker left, Patriots fans did not do a great job of this. For one thing, with Peyton Manning playing in Denver, they're natural rivals of a sort. For another, Welker's contract of two years, $12 million seemed eminently reasonable, and the Patriots' offer came in just below that. As a result, some Patriots fans have taken to villainizing Welker for jumping ship for a relatively small amount. More have labeled the Patriots the villains for lowballing one of their favorite players. Still others are pointing fingers at the New York Jets, because they suck and are evil. 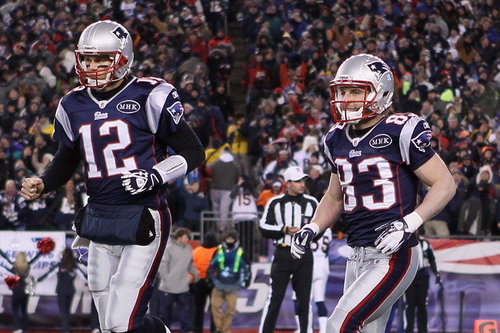 The Patriots lost Wes Welker to the Denver Broncos, but this isn't the first time we've seen this scenario play out.

Professional sports are weird. In the real world, employees are always open to offers, but there's a significant amount of inertia. There isn't a free agency period where employers all vie for the best in the field, and companies rarely have to be concerned with sudden drop-offs in performance due to age, at least not in such small ranges as in sport. Employers don't have to constantly adjust their valuation of individual employees, and aren't forced to put that valuation to practical use every last year. As a result there's a great deal of inertia that just isn't present in the NFL or MLB.

So, when someone says that this is just business--that Bill Belichick and the New England Patriots telling Wes Welker he's worth only $5 million a year plus incentives to them is in no way personal or a betrayal--they are right. And the same thing is true when Wes Welker says "thanks, but I've got a better offer in Colorado, and I'm going to have to go with them." It's possible that Welker does feel offended--there's no accounting for individual reactions--but the point is that he really shouldn't.

Now, with Jacoby Ellsbury there may not be quite so much emotion involved. Patriots fans loved Wes Welker, but there's been a bit of distance between Ellsbury and Red Sox fans--at least the sort who don't hold up signs asking the young center fielder to marry them. Still, come the offseason, when Ellsbury very likely takes the money and runs, there's probably going to be some contingent of Red Sox fans who feel that Ellsbury is a traitor to the cause, and some other contingent which feels the Red Sox were wrong not to give Ellsbury his due, and not just from a baseball standpoint.

Even with all the differences, though, this is, in fact, the real world. And this is just an employee getting a better offer from another company. There don't have to be villains.

Unless he signs with the New York Yankees. Then we burn him in effigy.