Age, inexperience, and also inefficiency kept Felix Doubront's workload down in 2012, and that can't happen again

In 2012, Felix Doubront was far from perfect. However, the season was encouraging in a lot of ways. He was below-average in terms of ERA, but adjusted run estimators like Fielding Independent Pitching thought a bit more of him, and he struck out over a batter per nine. That last bit is something very few 24-year-old left-handers in history have done with the workload Doubront had, but that alone won't be enough to make him productive. Going forward, he's going to need to be more efficient in order to be more than just a back-end starter.

Doubront threw a career-high 161 innings, but in reality, his workload equated to much more than that. Example: Doubront threw 2,868 pitches in his 161 innings of work, while teammate Clay Buchholz, in 189-1/3 innings, threw just 32 pitches more on the season. Doubront was one of the game's most inefficient starters in 2012, coming in next to the likes of Edinson Volquez -- who shouldn't even starter in the majors -- in this regard. 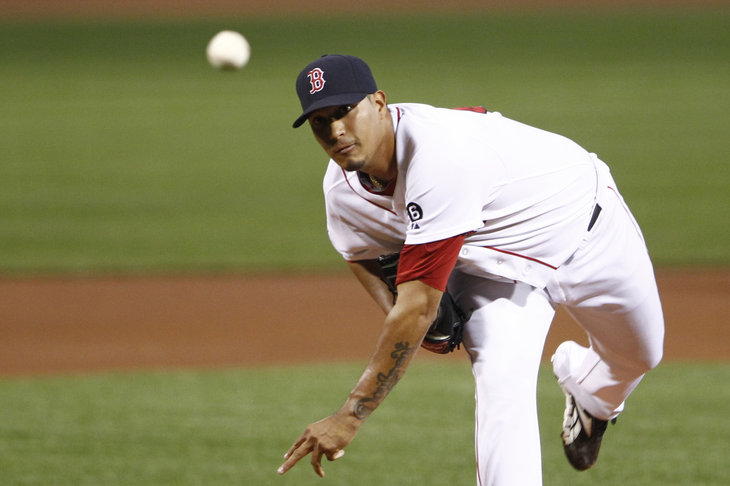 It also means longer innings, making each pitch after a certain point more difficult than if they had been spread out in the sixth and seventh innings more often. From pitches 76 through 100, Doubront allowed a .261/.325/.535 line -- 22 percent worse than the league average. It's no surprise that only eight of his starts all season resulted in an appearance in the seventh inning, given how hard he was hit once fatigue from his inefficiency set in.

These are all fixable problems. In Doubront's last few starts of the year, he reminded the Red Sox what he is capable of when he's attacking the strike zone and hitting his spots, as his final four starts resulted in a 3.08 ERA over 26-1/3 innings, thanks to a 2.4 strikeout-to-walk ratio and 31 punch outs. Now, expecting him to do that all of the time is asking too much, but there's a useful middle ground between his season line and the kind of performances he put up when he managed to be efficient. Believing Doubront is capable of a league-average performance with the amount of innings his pitch count should result in isn't a stretch. But, until he shows he's capable of some kind of consistent efficiency, it's the kind of thing you pencil in, rather than take as definitive.

Doubront will be just 25 in 2013, is left-handed, and has stuff as good as his strikeout rates indicate. Until he learns to hit his spots consistently, though, he's going to give up a few more walks than he should, and extend plate appearances far past the point of being in his favor -- even if the end result is an out. Efficiency is what will either make Doubront a mid-rotation arm that can provide the Red Sox with innings and strikeouts for the next half-decade, or it can be his downfall, the thing that eventually makes him replaceable if and when Boston's pitching prospects are prepared for the show. The 2012 was Boston giving him a shot to prove he can start in the majors. Consider 2013 his first chance to show them that he can start with the Red Sox from here on out.