The Cult of Jackie Bradley

Share All sharing options for: The Cult of Jackie Bradley

Somewhere off in the wilds of East Asia, Xander Bogaerts is making outs. Bogaerts, as you probably know, is Boston's consensus number one prospect. He was ranked first by Baseball America, Baseball Prospectus, MLB.com, Sox Prospects, and People With Xs In Their Names Illustrated. Consensus is in. Dude has some skills. He's also (as of Monday night) putting up a .528 OPS in the World Baseball Classic. Quick, trade him to the Marlins!

I'm kidding, of course. Bogaerts (the "e" comes after the "a") is just 20 years old and playing against, if not major league competition, then at least major league spring training level competition or something thereabouts.* Regardless of how we characterize the specific level of competition, it's higher than Bogaerts has faced before, and possibly significantly so. Struggling, while never ideal, shouldn't be wholly surprising, and it doesn't reflect negatively on Bogaerts at all.

*Seriously, does anyone have any idea what level the WBC compares to? It's gotta be all over the map. Like facing a major league All Star one batter then a Double-A scrub the next.

Still, prospect'n is a fickle mistress, so meanwhile, back in Whoville, Red Sox fans have a new binky. We've talked about Jackie Bradley in this space before and with reverence. It's not been unfounded praise, either, as the 22-year-old center fielder has acquitted himself quite well this spring. His home run and double yesterday brought his spring line to a stratospheric and, it should be noted, utterly ridiculous .519/.618/.704. My natural inclination is to put the brakes on at this point, to throw up a stop sign, to continue with the inexplicable driving metaphors, and remind everyone of the facts of the situation. I tried to do that last week, and I still think that Bradley would benefit from time in Triple-A while the Red Sox would benefit from gaming his service time. Why settle for six seasons of a young, all-star center fielder when you can have seven?

It was true last week and it's true now, but what's also true is that nobody likes a reality check, especially when it comes to prospects (myself included). Bradley is the future and if his present means anything, the future is bright. At least in center field. That's a somewhat surprising idea from 10,000 feet when you consider that Boston is likely to lose a should-have-been MVP at the position next off-season. Anytime people are patting the all-star on the rump to thank him for his time with the team, but doing it hard enough to direct him out the door, you know there's excitement in the air.

So what can we do to prepare for the coming of the Bradpocalypse. Bradlypse. No, no. That's terrible. The dawning of a new Centuradley. Definitely not. OK, something to work on. Anyway. What can we do as fans to prepare for Bradley? Here are some suggestions.

1. Be the first on your block (or second if you live on my block) to get yourself a Jackie Bradley jersey! Bradley is number 74 this spring, so you could stick with that, but you'd have to get the road jersey (which, honestly, I prefer anyway for the sweet 'swinging sox' logo on the sleeve) so you could put "Bradley" on the back. If you just had number 74 people would think you were some weirdo.

But you know that as soon as he gets up for good he's going to change it to something lower. That means you have to guess what number Bradley will pick. I've done some research (we're nothing if not thorough here at OTM) and I think I have the answer. Bradley will go with number 19. According to many photos, most of which I'm not allowed to post here but which I can link to, 19 was Bradley's number in college at South Carolina University.

If this is his choice, it's good on multiple levels. First, had Bradley been number 9 then we'd be at an impasse. Second, 19 was the number of the dearly departed (to Los Angeles) Josh Beckett, a player whose time with Boston I'll always cherish, but who was probably ready to wear a different color uniform. In deference the Sox won't hand out 19 to any old schmuck, but I'd think they'd happily give it to someone likely to honor it and hold onto it long term. Someone just like Jackie Bradley.

Just think how smart you'd look in one of these: 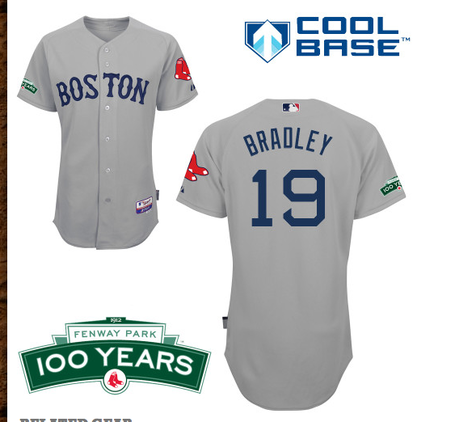 2. While you're sizing how you're going to fit that sweet sweet piece of $250 cloth into your budget (who needs electricity?), steel yourself for the potential Ellsbury fallout. Lest this come off badly, I really like Jacoby Ellsbury. By chance I happened to be at his first game with the Red Sox (a loss to Texas*) and witnessed his first major-league hit, a seemingly routine grounder to shortstop. Michael Young was manning the position that day. He charged the ball and came up throwing, everything you should do on grounder like that. 99 percent of hitters would have been out, but Ellsbury beat it. I was there with my wife and we both turned to each other in shock.

* This game featured Sammy Sosa at DH for the Rangers, Kenny Lofton leading off, and Eric Gagne closing. Gag me with a very long spoon.

Up until recently I still harbored hope that Ellsbury would re-sign with Boston. And maybe he still will, but it seems harder and harder to figure out how that would happen. Likely he'll either be traded at the deadline if Boston is out of contention or he'll leave in free agency. In either case this time next season we'll be reading stories about how Jackie Bradley is handling the pressure of being the Red Sox' starting center fielder. In the meantime we'll have to suffer through stories of how Ellsbury didn't like Boston, or was soft (Touch your skin. Aren't we all soft?), or didn't care, or always wanted to play for the Yankees like some kind of spiritual sequel to Johnny Damon, or some other such garbage.

3. We are going to need a Jackie Bradley chant. Now that Kevin Youkilis is gone, we Sox fans don't have any good chats, and if this spring is any indicator, we're going to need something we can break out at Fenway on a nightly basis. We could go with a basic "Ja-Key, Ja-Key!" It's not bad, but it's not all that inventive either. There's no good vowel to draw out like in "Youuuuukilis" so my suggestion is something that accentuates the Junior part of his name. Something like his initials with the initials for junior thrown on the end. "Jay-Bee-Jay-Are Jay-Bee-Jay-Are!" Chant that while you're taking your bathroom break at the office. How's it sound??

Needs work? Eh. Fortunately we've got some time, though, the man is hitting .519, so maybe not as much time as we think.