Mortensen came out of nowhere to help the 2012 Red Sox bullpen, but whether 2013 will be more of the same is an open question

Share All sharing options for: Red Sox Spring Training Profile: Can Clayton Mortensen Do It Again?

Clayton Mortensen's introduction to Red Sox fans came as the return for the beloved Marco Scutaro. He was a former first-round selection who had done little in either the majors or minors, and, at first blush, it seemed as if the Red Sox received very little in exchange for sending Scutaro to the Rockies. It turned out there were luxury tax implications, though, and also that Mortensen was someone the Red Sox felt they could tweak and get something out of where others had failed.

It was such a slight change, but it seemed to make all the difference in the world. Mortensen shifted to the first base side of the rubber in 2012, which you can see in these mlb.tv stills: 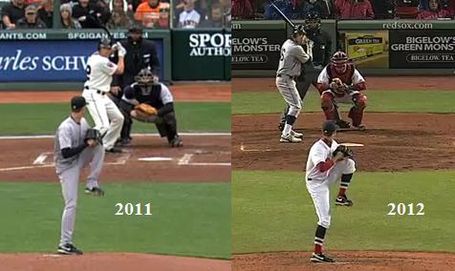 Mortensen's career strikeout rate in the majors heading into 2012 was 4.7 in 95 innings. In 2012, however, he punched out 8.8 batters per nine, while also posting his loftiest strikeout rate in the minors since he was in Low-A ball five years prior. As R.J. Anderson has discussed at Baseball Prospectus, a pitcher with Mortensen's repertoire -- fastball, change-up, slider -- can benefit significantly from a shift to the left side of the rubber, since it gives secondary stuff a better angle away, and fastballs are able to more effectively come inside on the batter. Knowing that, it's no wonder that his strikeout rates jumped as high as they did.

While the shift was unquestionably a positive for Mortensen, there are concerns about his future still. For instance, Mortensen's batting average on balls in play was just .238, and while relievers tend to have lower BABIP, his 2012 campaign is certainly not sample enough to say that's his true talent level. While he was effective overall, and finished the year with a 136 ERA+ and 3.21 ERA, in his last 16 games (of 26) he threw 19 innings, gave up five homers, allowed a .311 BABIP, and had just twice as many strikeouts as walks. In his first 10 contests, the ones that got him attention in the first place, Mortensen threw 23 innings, gave up just a pair of homers, and while he struck out fewer batters per nine, he also allowed opponents just a .169/.233/.312 line.

So, who is the real Clayton Mortensen? There's a good chance it's neither of those pitchers, as much of the second-half struggles look like something that can be learned from or adapted to, and the first half is full of numbers that no one believed to be true even in their most optimistic moments. However, he might not be what the final product suggests, either, as that's likely giving him a bit too much credit given the problems in his second half are very real ones involving command and a lack of a deep repertoire with real biting stuff.

Mortensen's ERA was just 3.21, but he allowed nearly 40 percent of his inherited runners to score, and that's with what looks like substantial BABIP luck involved. Baseball Prospectus lists his Fair Run Average, which accounts for the kind of situational issues relievers deal with better than something like FIP, as being 5.90. By Prospectus' own scale, that would be considered "horrendous." It might turn out that Mortensen does have some control over balls in play, and would therefore be better than that, but how much better would he have to be to make him worth a roster spot in a crowded bullpen?

Last year, the question of just how good Mortensen is didn't have to be answered. The right-hander had an option, a history of starting, and was considered depth for multiple innings at a time. In that, he was a success. In 2013, however, Mortensen no longer has an option. The Red Sox have a pitcher who is very likely worse than his 2012 suggests, who can't be stored in the minors unless he clears waivers, and, in all likelihood, doesn't have much of a role coming to him on the 2013 team even if he were to magically pass through waivers unclaimed. Given this, Mortensen very well might be the first man designated for assignment coming out of the spring, should someone off of the 40-man roster require a spot by Opening Day. The Red Sox could end up regretting that if it turns out Mortensen is better than some advanced stats suggest, but the likelihood is on regression catching up to him sooner than later.