It's the Rays' Joe Maddon who tends to get all of the attention for extreme defensive shifts, but John Farrell is no stranger to alternative alignments. In 2012, while manager of the Toronto Blue Jays, Farrell employed an extreme shift that saw third baseman Brett Lawrie line up in short right field against pull-happy left-handed hitters. Colin Wyers of Baseball Prospectus wrote extensively about this last year, as Lawrie's defensive numbers were misleading (and overrating him) in certain systems thanks to the shift. From Wyers' work, a look at that particular shift in action: 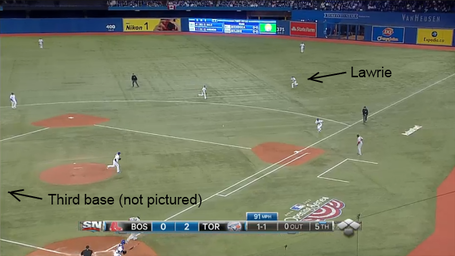 Farrell no longer has a Brett Lawrie on his roster, but he does have a Will Middlebrooks, and because of this, the team is currently investigating whether or not this shift, or one similar to it, can be employed in Boston as well. From Nick Cafardo:

"Yes we will shift, but to what extent, we're going to get a better read," he said. "We felt we had the ability to move [third baseman Brett] Lawrie around more freely. We'd like to put the third baseman on the [shortstop] hole side with lefthanded hitters." Farrell said he has to gauge how effective Will Middlebrooks would be in that situation.

How much shifts actually help is an open question. The aforementioned Wyers has researched and written about the various reasons why the impact of shifts might be overstated, that it might be more of a sabermetric narrative than an actual development. That being said, if there is some positive impact, there's no harm in employing shifts, and the fact that Farrell has an open mind to possible improvements is itself a positive. As a team that just two years ago missed the playoffs by one game, you take incremental improvements where you can, and hope they all add up to something more than their parts.

That train of thought brings us to the next defensive tidbit out of Farrell, as he said on Tuesday that he is considering employing right fielder Shane Victorino in left field at Yankee Stadium, given the dimensions of the outfield. With more ground to cover in left than in right, freed from the notoriously difficult right field at Fenway, left field for Victorino in Yankee Stadium might make all kinds of sense, while Jonny Gomes, Daniel Nava, or whomever can be better hidden in right.

The Yankees would agree that this makes sense: they employed Brett Gardner as their left fielder, despite his status as the top defensive outfielder on their roster, and left the inferior (but still capable) Nick Swisher in right field the last few years. Now, with Swisher gone, and Ichiro Suzuki's arm and range on board in his place, the Yankees are pushing Gardner to center and moving former center fielder (well, when he's back from his arm injury, anyway) Curtis Granderson to left. While his range in center has diminished, he's still plenty capable of handling left field, while the eldest of the trio, Ichiro, will get the easiest assignment of the bunch. This, in many ways, is similar to what Farrell hopes to accomplish, albeit in far fewer games, by switching Victorino to the opposite side of the outfield.

Combine these defensive thoughts with Farrell's plans to shift Victorino around in the lineup depending on the handedness on the opposing starter, and you see the Red Sox have brought in a thoughtful tactician, something they maybe haven't had in the dugout for a long time. In this era of ever-advancing data and ideas, a manager with Farrell's open mind and hands-on approach can be a strength, something we're seeing the potential for early on in his first spring training at the helm of the Sox.