Boston added to their relief depth on a surprisingly inexpensive deal with a former closer.

The Red Sox have been looking to add relief depth this off-season, and have managed to bring two arms on board for surprisingly reasonable prices. First, there was the Burke Badenhop trade with the Brewers, and now comes NL Central pilfering of another sort, with the Sox scooping up free agent and former Cardinals closer Edward Mujica, all for just two years and $9.5 million. Jeff Passan of Yahoo! Sports was the first to report the deal.

Now, that's not to say Mujica is without any problems: he tends to be inconsistent, as relievers who are susceptible to the long ball often are. He walks essentially no one, though, to the point where he and Koji Uehara already have something to talk about when they meet in the spring: Mujica's career 1.4 walks per nine since 2006 are the lowest among active pitchers since 2006, minimum 400 innings, and just behind Koji's career 1.2 mark among those with at least as many frames as Uehara.

His strikeout-to-walk ratio is the source of his success, as he's punched out 5.2 times as many batters as he's walked in his career, and it's allowed him to post a 104 ERA+ in spite of his homer rates. Going back to just 2009, though, since the time he joined the Padres and turned his career around, Mujica is the owner of a much more comforting 115 ERA+, as well as a three-year run of 132,132, and 131 in that department.

He lost his closer role with the Cardinals to rookie Trevor Rosenthal, but it turns out that it wasn't simply performance-based: Mujica had a rough September, yes, posting an ERA of 11.05, but he also was dealing with a groin injury, which helps explain his relative absence in the postseason, where he threw all of two innings, and none in the NLCS or World Series. 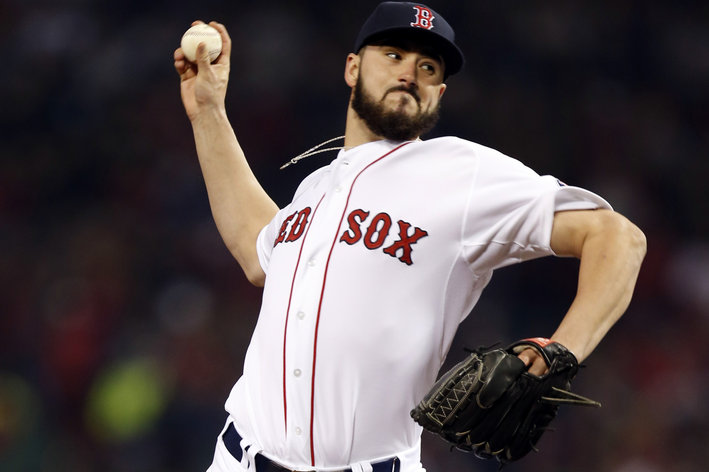 That might not be where the present-day need is, but it's where Boston wants Workman to end up in the long run.

There are some parallels here between Koji and Mujica, as they were both acquired on the cheap despite tremendous performances, with some injury wrinkles thrown in that likely helped to lessen the fee. While Mujica is certainly not the arm that Uehara is, he also doesn't have to be: he's joining a bullpen with Koji as the closer, along with Junichi Tazawa, Craig Breslow, the returning Andrew Miller, and Burke Badenhop. This also gives him some room to fall back a bit in the move from pitcher-friendly home parks to Fenway and the difficult AL East, while still remaining useful. Someone has to pitch those innings, you know.

The acquisition of Mujica, a right-hander, also might mean that Brandon Workman can safely head back to Triple-A Pawtucket to remain stretched out as a starter. All in all, this is an impressive combination of events for a pitcher who will cost just barely more in 2014 than the non-tendered Andrew Bailey would have for all of half-a-season of work.

As the Red Sox non-tendered both Ryan Kalish and Bailey earlier this week, there is already room on the 40-man for him, and no corresponding move is necessary.