Checking the ZiPS Projections for the 2014 Red Sox

Earlier this week, the ZiPS projections were released for the upcoming Red Sox season. There were a few things that stood out on the first look through the list.

Share All sharing options for: Checking the ZiPS Projections for the 2014 Red Sox

Being the huge nerd that I am, one of my favorite parts of the offseason is when the various projections start to roll out. Of the many systems that are released every year, the two best in my opinion are PECOTA, from Baseball Prospectus, and ZiPS, which is made and released by Dan Szymborski of Fangraphs and ESPN. The latter was released this week for the Red Sox, and includes the projections for A.J. Pierzynski on the Red Sox. Just as a reminder for those not as familiar with these projections, they are not the same as predictions. They are reached using vast amounts of past data, but players can and always will outperform their projections, or underperform based on them. With that in mind, there were a few things that stood out to me about this year's crop of ZiPS projections for the Red Sox.

SPLOOSH. Every time Szymborski runs his projections, he does so for the remainder of any player's career. Of course, with someone with as little data as Bogaerts has to this point, future projections are less reliable. Still, though, when you see Troy Tulowitzki as the most comparable player for Bogaerts moving forward, it's impossible not to get excited. When Tulowitzki comes to mind, it's easy to first think of his injury history and inability to stay on the field. Even with the injuries, though, the Rockies' shortstop is still regarded as easily the best shortstop in the game, and having your team's top prospect be so closely compared to him is extremely exciting. He has racked up 3689 plate appearances over parts of eight seasons, and has hit to a career 121 wRC+, with very good defense at the most premium position on the diamond, giving him 29.2 fWAR in that time. In five of those eight seasons, he has been worth at least 5.0 fWAR. If we are looking at that type of career from Bogaerts eight years from now, the future looks bright for the Red Sox at the shortstop position.

This, to me, was the most fascinating part of the entire projection. We've heard so much over the past few months about the tremendous amount of starting pitching depth in the system, but that has been mainly due to the guys on the major-league roster, plus Allen Webster and Anthony Ranaudo. It's not that we don't think about Barnes - he may have the highest ceiling of all the guys at AAA - it's just that he seems to be the furthest away. Behind the six major-league starters, Brandon Workman, Webster and Ranaudo, Barnes is seemingly the 10th guy on the starting pitcher depth chart. And yet, in this projection, he is basically equal to Felix Doubront, and is already projected to be a league-average pitcher. Now, it's important to remember that projections are dealing strictly with a player's minor-league numbers, and knows nothing about their actual development. This is important because Barnes' secondary pitches likely need a bit more work than the other pitchers. Still, though, this is highly encouraging. ZiPS projects the UConn product to strikeout 8.4 batters per nine innings while walking 3.5, and to pitch to a 100 ERA- and 98 FIP-. In comparison, Doubront is projected for a 101 ERA- and 99 FIP-. If they both spent all year in the majors, I wouldn't expect the results to end up like that - Doubront is the better pitcher right now - but this projection definitely has me a bit higher on Barnes than I was last week. 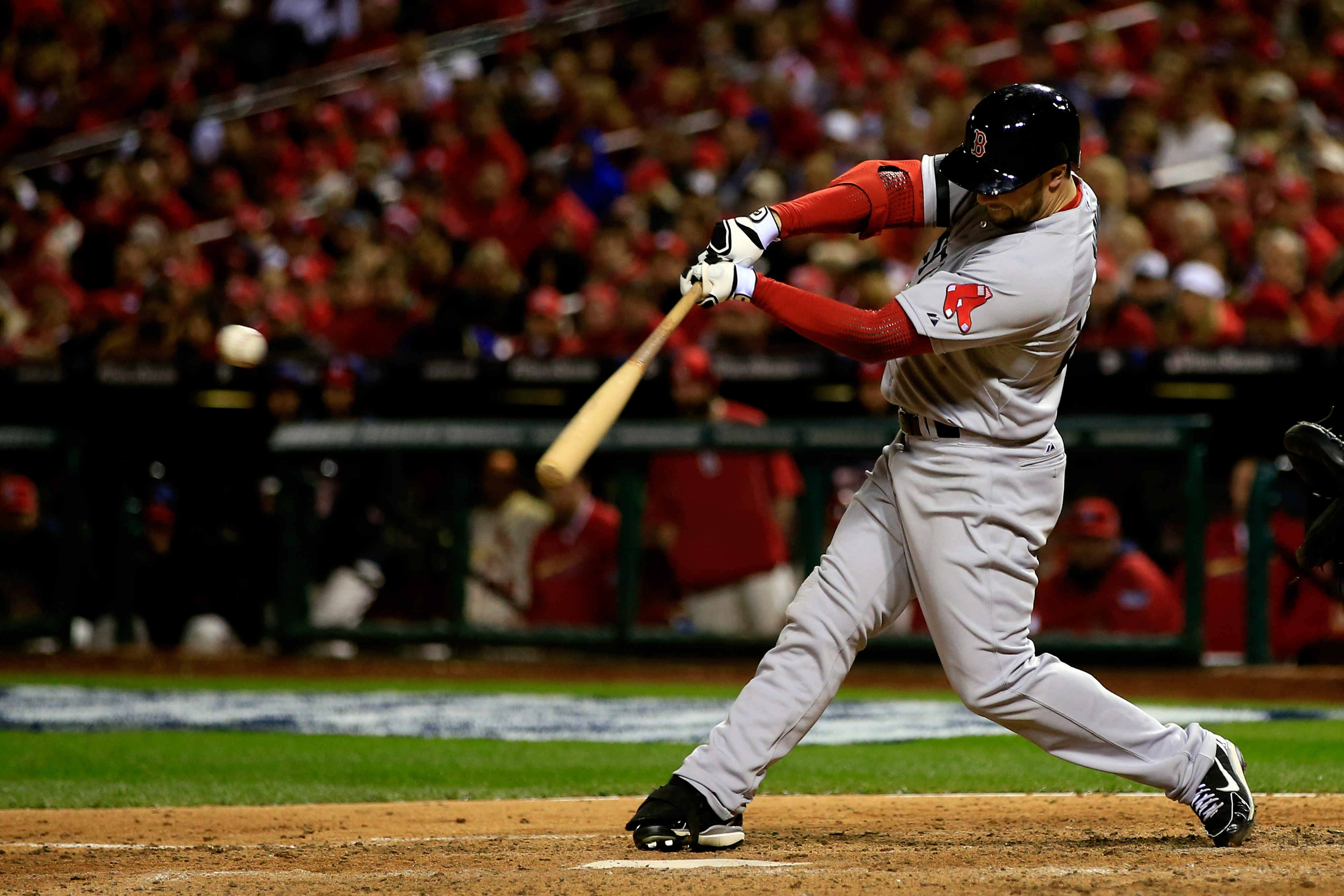 One of the most interesting storylines for the 2014 season, in my opinion, is whether or not Daniel Nava can come close to repeating his performance from 2013. Towards the end of last season, I wrote that I did not believe his season was much of a fluke, and I still believe that. However, I'm not sure ZiPS agrees with me on this one. They still peg him for solid offensive production, with a .257/.344/.384 line, good for a 98 OPS+. That's a pretty big drop off from his .303/.385/.445 line from this year, and it's more than just regressing his .352 batting average on balls in play. ZiPS is also projecting a career-worst 8.8 walk-rate, as well as a .127 Isolated Power, following two seasons of .140+ ISOs. While I wouldn't expect another .300 batting average this year, or a 127 wRC+, I would not be at all surprised if Nava outperformed this projection and hit to a wRC+ somewhere in the 110-119 range.

Just how low was the Red Sox' offer to Jacoby Ellsbury? 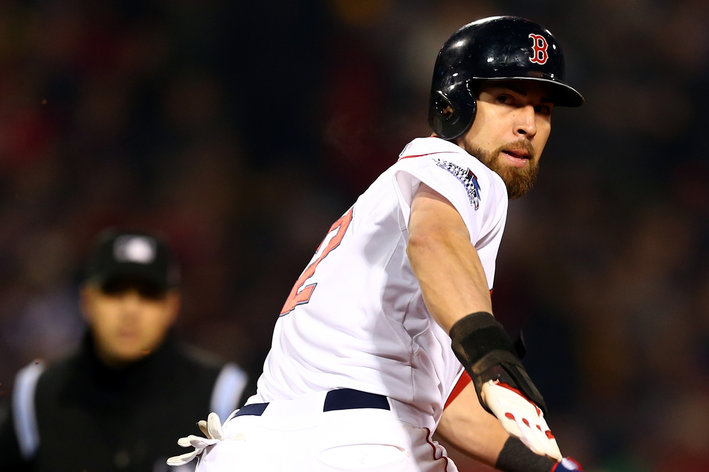 The Red Sox' interest in bringing Jacoby Ellsbury back may have been even lower than we thought.

Of course, the biggest story from this week is Jacoby Ellsbury's departure to the Yankees, and how the Red Sox will replace his production. Assuming Bradley is the man to take Ellsbury's spot in center field, ZiPS thinks Boston will have to look elsewhere for an offensive replacement. For the 2014 season, Ellsbury was projected for a .287/.340/.437 line (109 OPS+) for the Red Sox, while Bradley is projected for just a .245/.322/.375 (89 OPS+) line. Now, I would expect Bradley to be a better hitter than this, as his struggles at the major-league level seemed normal for a guy who was rushed to the bigs. With that being said, I still think he'll be a slightly below-average hitter. If the Red Sox are going to make up for the offensive production of Ellsbury (who I also think will outperform those projections this year, for what it's worth), third base is the most likely spot it will happen.

I don't think anyone needed more proof that David Ortiz is an ageless wonder. But if you did, ZiPS is projecting the 38-year-old to have another All-Star season at the plate in 2014. They have him pegged for a .296/.386/.552 line, good for a team-best (by far) 151 OPS+. The fact that the projection systems still expect him to be playing like this at this age is incredible, considering that they do take aging-curves into account. Luckily for the Red Sox, aging curves matter much less for the elite players like Ortiz. For a team that could potentially be lacking in serious power once again, especially if Mike Napoli doesn't return, Ortiz's power bat can always be counted on. And if you're curious on what the DH's top career comparison is, it's George Brett. He was an alright player during his career.

Those are just a few of the things that stood out to me on my first look through the ZiPS projections for the 2014 Red Sox. There are still a lot of other things to look at - both encouraging and discouraging. If you find yourself with some time on your hands, check out some of the other projections, especially for the prospects.