Jacoby Ellsbury signed the contract he deserved, and Boston's GM did the right thing in letting him sign it elsewhere.

Congratulations to Jacoby Ellsbury. From the athlete's point of view -- the point of view to which I am almost always sympathetic -- every big-money contract is a good contract, especially in soft-capped baseball. If the owners are willing to give it out, the players have every right to take it, and everyone is better off for it. This is one of those times, for Ellsbury, Yankees fans, and Red Sox fans alike.

Ellsbury was always aiming to be a big-contract guy, which he codified by hiring Scott Boras, an act which itself has become basically a pejorative. A "Scott Boras client" is, by extension, a bad dude. This is wrong. Fans don't want to see players "overpaid," but they don't regularly consider the alternative. When Kobe Bryant signed a his two-year, $48.5 million contract with the Los Angeles Lakers last week -- their first offer -- enough fans were upset with the team that Bryant felt the need to respond to Yahoo!'s Adrian Wojnarowski:

"Most of us have aspirations for being businessmen when our playing careers are over," Bryant told Yahoo Sports in a corridor of the Verizon Center. "But that starts now. You have to be able to wear both hats. You can't sit up there and say, 'Well, I'm going to take substantially less because there's public pressure, because all of a sudden, if you don't take less, you don't give a crap about winning. That's total bull----.

"I'm very fortunate to be with an organization that understands how to take care of its players, and put a great team out on the floor. They've figured out how to do both.

"Most players in this league don't have that. They get stuck in a predicament - probably intentionally done by the teams - to force them to take less money. Meanwhile, the value of the organization goes through the roof off the backs of their quote, unquote selfless players.

"It's the most ridiculous thing I've ever heard."

That hyperbole, aside, Kobe's right: He shouldn't sign for less on principle. The same goes with Jacoby Ellsbury, and Jarrod Saltalamacchia, who, slightly earlier in the feeding frenzy that was Black Tuesday, signed with the Marlins for 3 years, $21 million, the Red Sox having opted instead for one year of A.J. Pierzynski for $8.5 million that morning. There was much caterwauling over the choices on Twitter, given the likability of the respective players; the resounding sentiment seemed to be that the least Ben Cherington could do is not sign dickheads, when the difference boils down to a year or two here or there.

This is an obviously strange thought process that ends up being both hard to shake and demonstrably wrong. These things add up, and we can't count on the Dodgers to give us lap-band surgery every time. (The corollary to "There's always a sucker" is that he may be cheap.) The Red Sox became great by combining talented players at below cost, creating a team on which the pieces complemented each other rather than obviously trying to supplement them. If it didn't work for Barry Bonds, it won't work for anyone else. 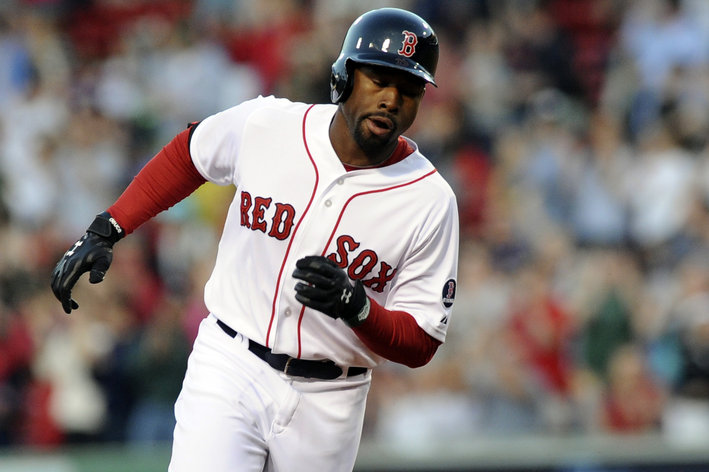 In this case, it was the second. It didn't seem inevitable to me that Ellsbury would end up in the Bronx beforehand, but it seems obvious in retrospect. All of last season, it seemed to me like he was already as good as gone somewhere, and then he turned a half-season slump into a number of hot streaks and finished with a wonderful end-line. I do not mean "fell into" in a bad way; the way he literally falls over the plate during his swing is mesmorizing, but it only reinforces the idea that gravity is always trying to claim him, to crack him open again. Every game, he seemed one play away from the end of his time in a Boston uniform, so I've treated every game just like that. Maybe that's the rub, and why I don't feel what you feel.

I never got over the injury thing as it began happening years ago, and Ellsbury's ostensible aloofness during his monster season and the 2011 catastrophe didn't endear him to me at all. I'm also a fan of stories -- specifically, finishing them -- and a guy winning a World Series in his first and last seasons with a club seems like as good a way as any to go out, and that's before the free taco he won for America in 2007. Not everyone can stay for the whole ride, and if there's one thing every one of the three amazing titles the Sox have won have taught me, along with pretty much any title anyone has won, ever, is that it takes all kinds: Aloof Ells out, Asshole A.J. in, charming guy TBA to follow. It's what happens.

Ellsbury always knew what game he was playing. So did Cherington. If the ebb and flow of good contracts and bad contracts this offseason teaches us anything -- even just the last 24 hours of it -- it's that you sign good deals when you can instead of waiting for the perfect one. The next deal will always be there, with the movie option attached. You couldn't have scripted it better. Now the credits are rolling, so credit where credit is due, to Ellsbury for making his money, and to Cherington for making his stand.