Will Middlebrooks v. Stephen Drew should be obvious for Red Sox

The decision between Will Middlebrooks or Stephen Drew on the 2014 Red Sox is a lot more one-sided than it seems.

Share All sharing options for: Will Middlebrooks v. Stephen Drew should be obvious for Red Sox

The Red Sox don't have many moves left to make, if any, but the one that keeps coming up is the a possible acquisition of shortstop Stephen Drew. Drew, who was part of Boston's World Champion 2013 squad, was submitted a qualifying offer by the Red Sox and has not seen his market take off as expected, despite excellent defense and a bat that was one of the best at the position even with early season concussion fallout.

This has led to a situation where Boston might be Drew's best bet at a quality pay day, and one where top prospects Xander Bogaerts would move over to third base, where he spent the playoffs, while Drew remains at short. There is a non-Bogaerts reason to avoid this scenario, though, and it's Will Middlebrooks.

Middlebrooks has his warts, as most ballplayers do: there's no denying that. However, he'll be just 25 in 2013, and despite spending time with the Red Sox for parts of two seasons, has accumulated all of 660 plate appearances over 169 games in the majors: we haven't seen very much of him at all in a relative sense, and he's barely had any time to show what he's capable of. In spite of a horrific first half that resulted in Middlebrooks demoted to Triple-A Pawtucket in 2013, he still has an above-average career line (102 OPS+), and was far better than that both in 2012 and once he returned to the majors this past summer.

There is the potential that Middlebrooks is never more than what he is now, of course, which is a low-average, low-on-base, high-power third baseman who has an average bat thanks to the latter. That would make re-signing Drew a safe move, as you know what you should be getting from him. While volatile, though, Middlebrooks' promise makes it worth giving him a shot over a full-season, especially since the Sox are set to get something out of letting Drew walk, regardless of what Middlebrooks does going forward: with Drew receiving the qualifying offer, the Sox will receive a compensatory first-round pick and the budget that goes with it when he eventually signs elsewhere. Remember, too, that it's only January: Kyle Lohse, who also is a Scott Boras client, signed a three-year, $33 million deal with the Brewers on March 25 last season after sitting on the sidelines thanks to a qualifying offer for the entire winter. Something will get done eventually for Drew, especially at a position with as little help around as shortstop.

So, if Middlebrooks flounders at third and the Sox have to live with that for a year -- or less if they make a trade, or promote Garin Cecchini from within, though the latter seems unlikely at this stage --  they still get a first-round pick out of it, which is a lot more than nothing. There is reason to believe Middlebrooks will be able to justify the choice to go with him on his own, however, with the pick just being the icing on the proverbial cake. 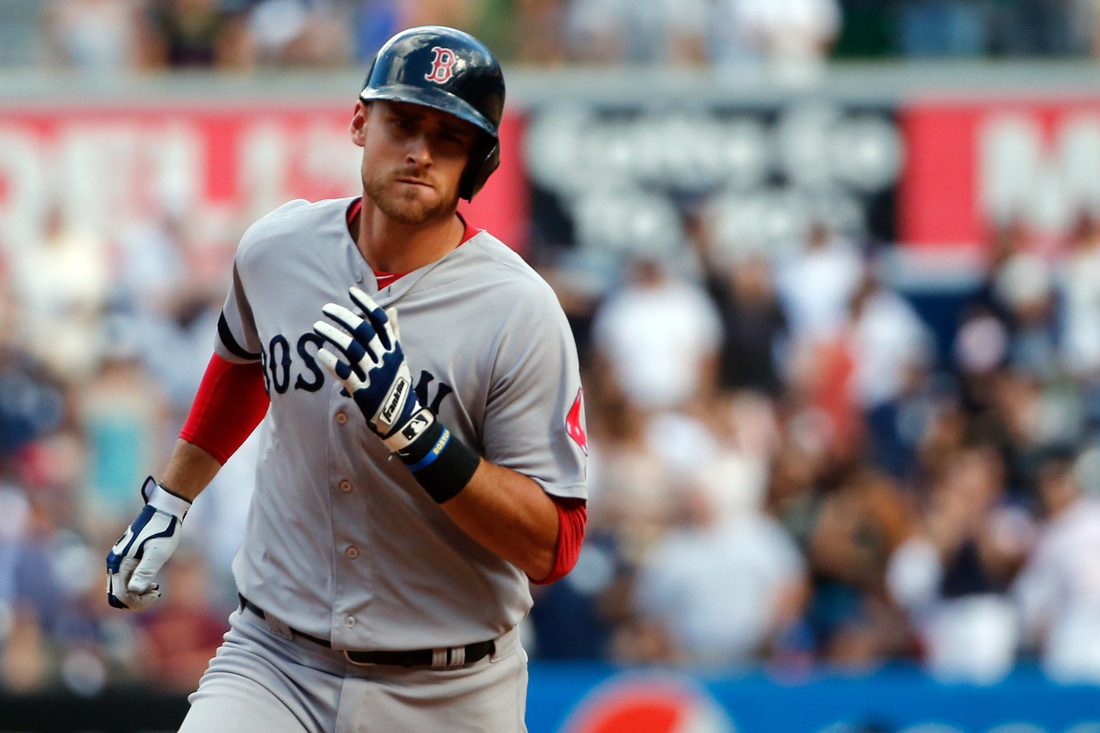 In 2012, Middlebrooks feasted on fastballs and hit .288/.325/.509 with 15 homers in 75 games. He didn't walk much -- he never will -- but his strikeouts were at a reasonable 24 percent level. With his plate coverage and power, Middlebrooks doesn't have to draw walks to be productive, so long as he can avoid biting on breaking balls on the outer half of the plate. To start 2013, he couldn't do that, continually setting himself up in plate appearances that, while longer from a pitches per plate appearance standpoint, were actually more problematic, as the pitcher was in control, leaving Middlebrooks' in a defensive position with lots of swing-and-miss. From Opening Day through Middlebrooks' June demotion, the third baseman punched out 28 percent of the time.

Maybe even more importantly, his batting average on balls in play was just .221. Part of the reason Middlebrooks was such a high-BABIP batter in the minors was due to swinging at pitches he could do something with. His plate appearances weren't short, but they ended on his terms often, with Middlebrooks putting solid wood on a ball where his bat could reach it and do something damaging with it. With Middlebrooks fighting just to stay alive so often at the plate in the first half of 2013, he didn't wreak the same kind of BABIP havoc, and all he had going for him was the occasional mistake that he would launch 400 feet.

Middlebrooks goes with the ball the other way with authority after working the count to 3-2 against Jhoulys Chacin.

He closed his stance while in the minors, allowing him to hit more balls up the middle and the other way more easily, which in turn led to more singles that he so desperately needed to go along with his power. That, plus a change in approach that saw him take control of his own destiny at the plate once more, helped save his season and led to a strong second half where he batted .276/.329/.476.

The kind of power Middlebrooks has shown off -- he's hit 32 homers in 169 career games despite his poor start to 2013 -- is a rarity in baseball right now. Just 14 players hit 30 homers or more in 2013, and while power isn't the only way to score runs by any means, it still helps to have some thump in the lineup for those days when hits and walks are harder to come by. If Middlebrooks can keep his average around the .265-.270 mark, and continues to hit for the kind of power he has in his career to this point, he's going to be a hugely valuable third baseman even if his on-base percentage is a little below league-average -- which, by the way, isn't as high as it used to be: the league-average OBP in the AL in 2013 was .320. At third base, it was .323, but the hot corner slugged just .419, a number Middlebrooks' can dwarf. Those numbers were helped along a bit by some guy named Miguel Cabrera, who will be a first baseman again going forward, possibly lowering the thresholds even more.

Not only is Middlebrooks' power somewhat rare in the majors as a whole, but also within Boston itself. Today's Red Sox have David Ortiz and Mike Napoli, but fast-forward a few years down the road, and what is there? With any luck, Xander Bogaerts has seen his homer potential flourish, but after that, where do the Red Sox turn? Jackie Bradley Jr. isn't a homer guy, and unless Garin Cecchini goes the full Youkilis -- which no one in their right mind is banking on as a sure thing -- he's no help there, either. Mookie Betts and Blake Swihart are supposed to be well-rounded hitters with power as their "weakness", and Bryce Brentz might only be a bench-dwelling lefty masher. This lack of future power, and in a league where it's clear acquiring any from outside the organization is an expensive endeavor -- Mark Trumbo says hello -- makes Middlebrooks all the more intriguing.

This is true whether the Red Sox envision him as their third baseman of the future or not. Giving him a full season in 2014 to show off what he can do -- something he hasn't had the chance to yet -- could raise his stock enough that Boston could benefit from a huge trade in which they sell off his pop to the highest bidder, making room for Cecchini at third in 2015. It's not a given Cecchini will be ready by then, or even a third baseman -- the Sox don't have to move Middlebrooks -- but from a strategic, position-of-power perspective, having this option is something they can only do if Middlebrooks plays for the Sox in 2014, while Drew plays for someone else.

Along the same lines, having Middlebrooks around means Cecchini could move elsewhere on the diamond, say, to first base or left field, depending on what the Red Sox need at the time, while still retaining some third base depth in case of injury or ineffectiveness. If Drew signs for a couple of years and Middlebrooks is traded in the meantime, not too far down the road, the Sox will have Cecchini for third base, and little else. Like with power, quality third basemen are something of a rarity in today's game, so being able to double up on depth like this without using up an extra roster spot is meaningful.

There are risks in playing Middlebrooks, but he's inexpensive, still has potential and youth on his side, and could be valuable for the Red Sox in the future for his power, whether because he's sporting a "B" on his hat or has brought in a significant haul in a trade. Drew might be the safer option of the two, but there are associated transaction costs in both dollars and draft pick form that, when combined with the above about Middlebrooks, makes him the less desirable option of the two.