We all know what the 2014 rotation is going to look like, so let's skip a year and see what needs to happen for 2015 to work.

Share All sharing options for: Plotting the 2015 Red Sox rotation

The 2014 Red Sox rotation isn't set in stone, as a trade to whittle down the options from six to five could still occur. The pitchers fighting for a job are clear, however, with Jon Lester, Clay Buchholz, John Lackey, Felix Doubront, Jake Peavy, and Ryan Dempster all established veterans with clear expectations and projections for the new year. This will not be the case one year from now, when Boston's rotation sees major turnover in as many as three of its five spots.

Jon Lester's contract is up at the end of 2014, and while the Red Sox and Lester are expected to work on an extension, his re-signing long-term is no guarantee: what Boston considers a reasonable, team-friendly deal might not jibe with Lester's interpretation, and there's a whole lot of money out there in the market for him elsewhere. The deals of Dempster and Peavy are both over after 2014, and the chances of them re-signing are minimal: Dempster, because he'll be headed into his age-38 campaign, and Peavy will likely command a significant deal elsewhere, one that could net Boston a draft pick. (This assumes, of course, neither is dealt before the winter is at its end.) Were they shorter on young arms, it would be one thing, but we'll get to that soon enough.

The guaranteed returns -- well, so much as you can guarantee something an off-season out -- are Clay Buchholz and Felix Doubront. Buchholz will be in the final guaranteed year of his extension at a cost of $12.3 million, while Doubront will just be entering arbitration for the first time. The wild card is Lackey, who has a league-minimum option for 2015 awaiting for him. Unless he's injured in 2014, it's hard to think the Red Sox wouldn't invoke that.

That would leave two spots open for new starting pitchers in Boston, at the least. While the market of the last couple of years would make that a potential problem for your average team -- we are talking about a world where Ricky Nolasco received a guaranteed five-year contract and almost $50 million -- the Red Sox have come prepared. It is very likely that the rotation at Triple-A Pawtucket will include Allen Webster, Anthony Ranaudo, Matt Barnes, Brandon Workman, and either Rubby De La Rosa or Steven Wright. Eventually, if a spot opens or his performance dictates it, Henry Owens could join them from Double-A Portland. 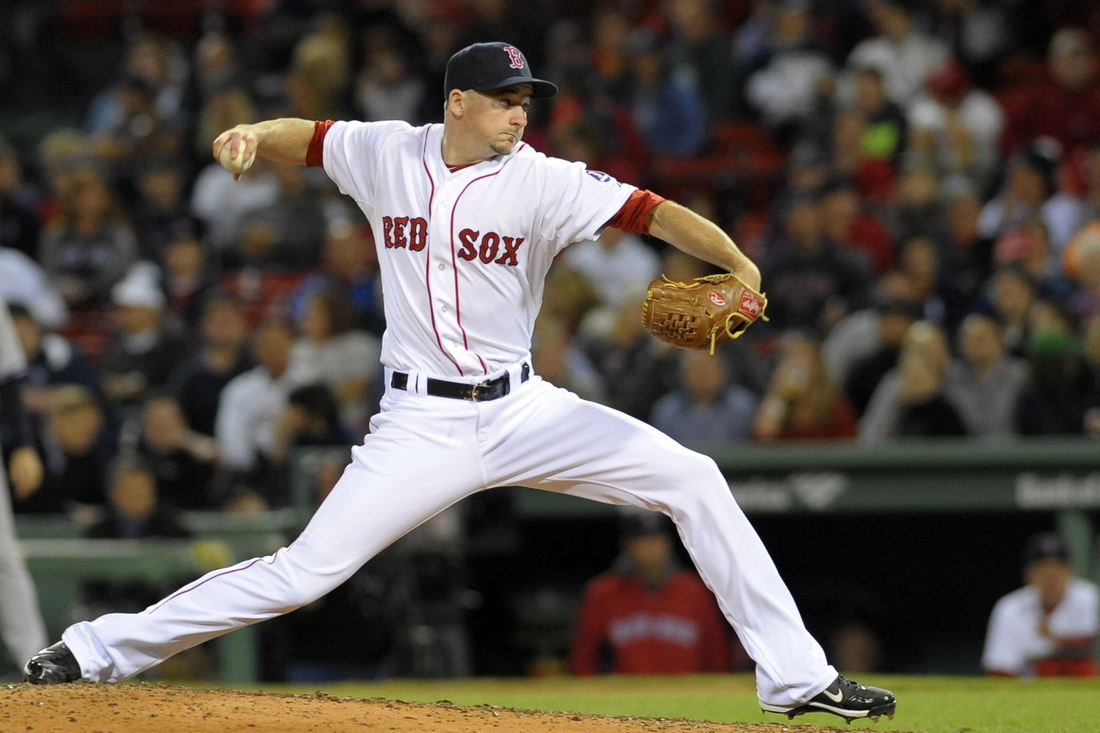 This means that 2014 is a critical year for these prospects. Webster, Ranaudo, Barnes, Workman, and Owens could all be top-100 prospects, or are at least in the mix, and whichever two of them are deemed the most ready by year's end could be big-league starters, permanently, as soon as Opening Day 2015. There is no reason to rush Owens, as he's the youngest of the bunch at 21 years old and won't require 40-man protection from the Rule 5 draft until the 2015-2016 off-season: others, such as Barnes, will need that status after the 2014 season, and will likely get a push first based on that, unless Owens takes another unforeseen jump in performance that cancels out most of this paragraph's point.

What's wonderful about having that volume of starting pitching in the upper minors is that the Red Sox have room for failure. If Anthony Ranaudo can't develop his change-up to the point where it can consistently fool major-league batters, he can slot into a high-leverage bullpen role, and Boston will still have other arms to look to for the rotation. If Barnes takes another year to get things rolling for Pawtucket -- he did take half-a-season at Double-A to pitch the way he needed to -- there's likely someone else in line ready for a spot who can make his extended stay a non-harmful reality. Rubby De La Rosa could be converted to relief right now, and while it would be an unfortunate place for an arm with his talent, it would be an understandable move for a team drowning in depth, with only so many jobs to hand out in the next year. Plus, at this point, it seems like either Workman or De La Rosa is destined to relieve, and De La Rosa isn't the one making people think he's a workhorse.

Masahiro Tanaka and the Red Sox

Could the Red Sox make a run at the best pitcher available?

Masahiro Tanaka and the Red Sox

The focus for 2014 success should and will most likely be on Webster and Workman. Both have already started in the majors, with varying levels of success. Webster needs to be more aggressive on the mound and more mindful of what poor location can do to his ERA against the world's best hitters, a fact he was reminded of in the majors but appeared to work on in the second half with Pawtucket. Workman's command needs to improve, as his fastball is his enemy when it's left up in the zone. They've shown promise, though, and of the bunch, likely need the least amount of time to take in Triple-A before coming to the show permanently. Should an in-season injury open up a spot in the Red Sox rotation in 2014, one of these two would be the likely call-up.

That's not to say it doesn't matter what Ranaudo, Barnes, De La Rosa, and Owens do in 2014. Webster and Workman are no sure things, so having more than just the two of them at the ready if a need arises would be a positive. The real key, though, is getting at least two of these arms to the point where the major-league rotation is settled already on the first day of 2014-2015 free agency. After that, it's just the one additional spot opening up when Lackey's option ends, and at that point one or two of the starters have likely becomes bullpen pieces or trade bait out of either necessity or need. And let's not forget that there is a completely different wave of pitching prospects in the lower minors -- Trey Ball, Brian Johnson, Teddy Stankiewicz, Myles Smith, Corey Littrell, Ty Buttrey, and somehow even more than that -- who will be much closer to the majors by this time two years from now.

Boston has set themselves up well for both now and the future, and the timing couldn't be more perfect given how little high-quality pitching is available on the open market from year-to-year nowadays. So long as two or three productive big-league starters come out of this specific wave of prospects, then the Sox have what they needed from them.