The Red Sox have a long history of significant trades. Is 2014 the year for them to make an even bigger splash than usual?

Share All sharing options for: Is 2014 the year for a major Red Sox trade?

In 2013, the Red Sox acquired Jake Peavy. In 2012, they sent Adrian Gonzalez, Carl Crawford, Josh Beckett, and Nick Punto to the Dodgers to essentially reboot the franchise. Gonzalez had been acquired the year before in exchange for Anthony Rizzo, Casey Kelly, and Reymond Fuentes. 2010 brought Jarrod Saltalamacchia into town, though at the time it wasn't easy to predict he'd be starting behind the plate for the next three years, replacing Victor Martinez who was picked up in 2009 for Justin Masterson, Nick Hagadone, and Bryan Price. 2008 saw the departure of Manny Ramirez for Jason Bay, and even 2007 had that awful bit of business with a man named Gagne.

To make a long and by no means comprehensive story short, the Red Sox never really seem to have a season that is not marked in some way by a significant trade. It's something we've come to expect: offseasons filled with speculation, and trade deadlines saturated with rumors connecting them to every big name on every bad team.

Usually, though, the resulting deals fall a bit short of the wildest rumors. The Red Sox never bagged Felix Hernandez or Cliff Lee, two of the most consistently rumored targets. Victor Martinez might come close, but really the clear king of the hill is the Adrian Gonzalez trade, and that ended less than two years later with Gonzalez on a plane to Los Angeles. Generally speaking, the Red Sox have preferred to avoid those blockbuster deals requiring significant investment in both prospects and dollars.

2014, however, might be the year to change that thanks to the Red Sox being unusually flush for the foreseeable future in both departments.

Let's look first at the farm system. Just a couple days back, Ben Badler declared that every last one of Boston's top 10 prospects had a chance to make the Baseball America Top 100 list:

How strong is the Red Sox farm system? All of their Top 10 prospects have a legitimate shot to crack the BA Top 100: http://t.co/nMeZGkH6JH

That's pretty ridiculous in its own right, but it doesn't tell the entire story. Those 10 prospects don't include Will Middlebrooks or Rubby de la Rosa, both of whom rank amongst the team's top 15 players 25-and-under according to BA. Anthony Ranaudo, who ranked #67 in the top 100 before 2011, just missed the top 10 despite having a major rebound from an injury-riddled 2012. Christian Vazquez, a top defensive catcher showing signs of life with the bat, also just missed out despite being expected by many to be Boston's starting catcher in 2015.

It's gotten so ridiculous down there that the biggest question might be how to fit all the prospects in on one roster. The Pawtucket Red Sox will feature a rotation of Matt Barnes, Anthony Ranaudo, Allen Webster, Dalier Hinojosa (international free agent signed to a $4 million bonus), and likely Steven Wright or Brandon Workman, depending on whether the latter is needed in Boston's bullpen). Rubby de la Rosa seems likely to be pushed to the pen, and Henry Owens, the system's #2 prospect, is likely to be pushing hard from Portland.

This is not to say that the Red Sox should be tripping over themselves to offload prospects. It's a foolish team that sees depth and decides it's a problem that needs fixing. But it does suggest that the Red Sox are in a position where they don't have to be quite so jealous of their minor leaguers, particularly those who fall short of being truly "special" like Xander Bogaerts. 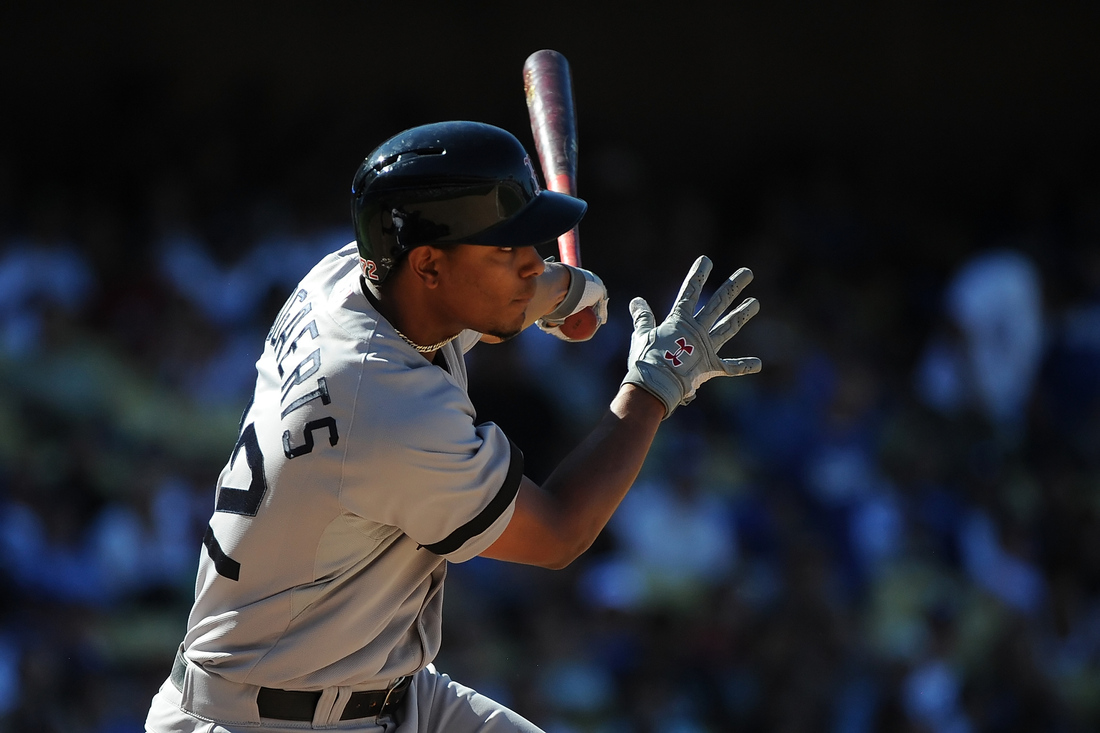 With that in mind, let's turn to the other half of the consideration: salary. The Red Sox have managed to get their payroll back up toward the CBT threshold, long pegged as their de facto soft cap, but looking down the line, there's no better time for the Red Sox to move in on a big contract. Between John Lackey, Jon Lester, Jake Peavy, Ryan Dempster, David Ortiz, A.J. Pierzynski, David Ross, Jonny Gomes, and Koji Uehara the Red Sox have some $90 million coming off the books after 2014. They'll likely try to bring back David Ortiz and Jon Lester, assuming both perform well, and John Lackey will probably be back as well on the league-minimum option that was triggered when he missed all of 2012.

Will Middlebrooks and plate discipline

Will Middlebrooks' faults are easily noticeable and have led to a lot of criticism for the young third baseman. Even without an ideal approach, his other attributes could make him a valuable player.

Chris Crawford writes up the top 14 prospects and more in his look at Boston's healthy system.

Beyond that, though, the Red Sox will find themselves maybe needing a starting catcher, assuming Christian Vazquez doesn't hit well enough to earn the starting spot (he'd certainly still be fine as a backup). Ideally the Red Sox will produce some bullpen arms from the minors, too, but even if you account for an extra $20 million in bullpen/bench help, $35 million for Ortiz and Lester, and maybe $10 - $15 million for a catcher. That leaves around $20 million just sitting there in a situation where every single acquisition cost about as much as it possibly could have.

Meanwhile, the free agent class is not looking promising. There's a few interesting players, but with the Red Sox reluctant to give long-term deals to players around 30 years of age, it's hard to imagine them finding an appropriate outlet that allows them to fully utilize their financial muscle.

Unless, of course, they go to the trade market. And the beauty of that option is that the Red Sox can turn to it before next offseason should the situation require it. Maybe another hole opens up along the way that the minor leagues can't quickly fill. A trade could push the Red Sox up above the CBT in 2014 if they don't find someone to take on, say, Ryan Dempster. But even if it did, the team would be able to dip right back under in 2015, meaning they wouldn't really take any significant hit.

Again, none of this is to say that the Red Sox need to make a trade. But in recent years when the deadline has come around, there's been a sizable contingency of fans ready to shoot down any trade that involves either big contracts or big prospects. That's all been well-and-good in the past--the Red Sox certainly should not have been offering up significant prospects for Anibal Sanchez in 2012--but this seems different. If ever there was a year where the Red Sox could make a trade splash, 2014 is it.