Boston has loads of starting pitching, but seems to want to control the market, never mind corner it.

The Red Sox have plenty of starting pitching, but they also find themselves in a position to take advantage of a weak market through trades. That would explain their interest in veteran right-hander Tim Hudson, who, according to CBS Sports' Jon Heyman, they "really want" to have in Boston for 2014.

The 38-year-old Hudson is reportedly looking for a two-year, $24 million deal, per Yahoo! Sports' Jeff Passan, but he also wants to win a ring, and is good friends with former Brave and current Red Sox backstop David Ross. Hudson might want to get paid, but he's been paid before -- he's never won, and if the interest is as mutual as it seems to be, he could very well be a Red Sox on a deal that works for both sides. 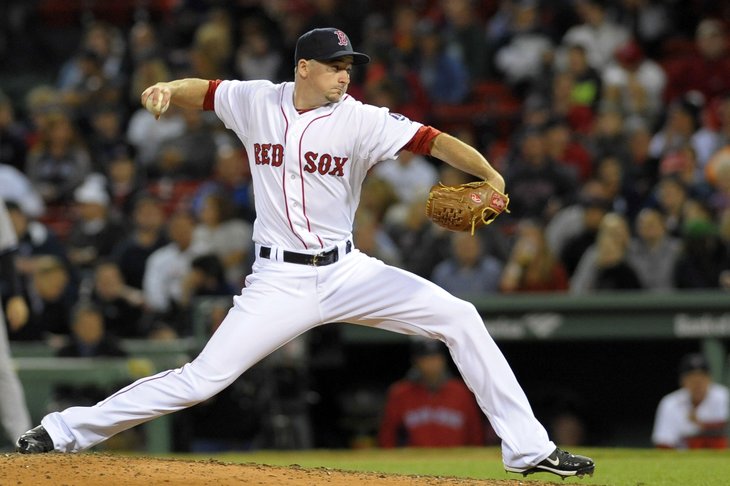 Of course, then there's the question of what to do with the pitching that's already in place: Boston has Jon Lester, Clay Buchholz, John Lackey, Felix Doubront, Jake Peavy, and Ryan Dempster signed for 2014, never mind any of the pitching prospects who could end up ready during the season. However, in a market where a 38-year-old starter coming off of season-ending ankle surgery can realistically pull in two years at $24 million, what do you think the Red Sox could get back in an off-season trade of one of Peavy or Doubront? Before you answer, remember: this is the same market where mid-rotation arms like Ervin Santana and Ricky Nolasco are looking for long-term deals paying $100 million and $80 million, respectively. Peavy only has the one year left on his deal, and so long as he pitches well, could be a qualifying offer candidate following 2014. Doubront hasn't even entered arbitration yet, is left-handed, and has shown flashes of being a useful mid-rotation piece. Someone in need of pitching who missed out on Tim Hudson could very well pay up in prospects to take from Boston's surplus, and/or the Red Sox could use that to fill another area of need on their own roster without having to dive into the free agent market for it.

Dempster didn't get a mention above, if only because the right-handed starter won't bring back much in a trade unless it's a larger package -- plus, unlike Peavy or Doubront, Dempster could shift to the bullpen as a swingman. Admittedly, Dempster would be an expensive one, but injuries happen, and acquiring a Dempster-type in-season when one occurs would be more costly than simply shoving him in the pen.

Hudson missed one-third of 2013 after undergoing ankle surgery, but his recovery is on target, as the surgical screw was removed from the area on Thursday according to the Atlanta Journal-Constitution's David O'Brien. Hudson has aged very well, as his 97 ERA+ from his shortened 2013 was actually his worst performance since 2006, and he's the owner of a 117 ERA+ since undergoing Tommy John surgery during the 2009 season.