Free agent starting pitcher Ervin Santana is looking for $100 million over five years. Fellow free agent Ricky Nolasco is seeking $80 million for his own five-year pact. If we're being kind, we could label both of these pitchers as mid-rotation arms, what scouts would refer to as number three starters: starters who show up to take their turns in the rotation, and generally produce an average performance by the standards of ERA. Yet, here they are, requesting money that looks like it belongs to better hurlers.

Neither pitcher is likely to get what they are looking for, though: this is just part of negotiating. If Santana is looking for $75 million, he should start higher than that, and if Nolasco is looking for something in an Edwin Jackson $52 million, he should also start out in a loftier place. Anibal Sanchez was looking for $100 million last winter -- the same Sanchez who was a better pitcher than either of this pair at the time, never mind now -- and ended up receiving $80 million with an option. Regardless of what these two sign for, though, it's clear that the cost of pitching continues to rise, even for inconsistent, mid-range-at-best hurlers like Santana and Nolasco.

With this in mind, it's good to be the Red Sox right now.

It's not because the Red Sox already find themselves with six major-league starters for 2014, though, that does play a part in it: someone will want to deal for one of those pitchers, and the Red Sox will be able to get something useful back when the Nolascos of the world are charging $10-$12 million per season for their services. Instead, it's good be the Red Sox in the long-term sense because they're loaded with pitching prospects. While they might lack future aces on the farm, they have an overabundance of mid-rotation types on the way, and rather than pay them $10 million to $15 million per year, Boston will be able to shell out the major-league minimum, then reasonable arbitration prices, for six years on each and every one.

The Red Sox have multiple pitching prospects who could turn out to be mid-rotation arms, if not better. Matt Barnes, Anthony Ranaudo, and Allen Webster are all at Triple-A, and all fit this criteria as top-100 prospects. Henry Owens could very well be the best of the bunch, and he's at Double-A. Even if they don't all pan out, the Red Sox won't need all four to reach their ceiling, at least not right away: Clay Buchholz is under contract through 2016, Felix Doubront hasn't even reached arbitration yet, and John Lackey has two more years left on his long-term deal. 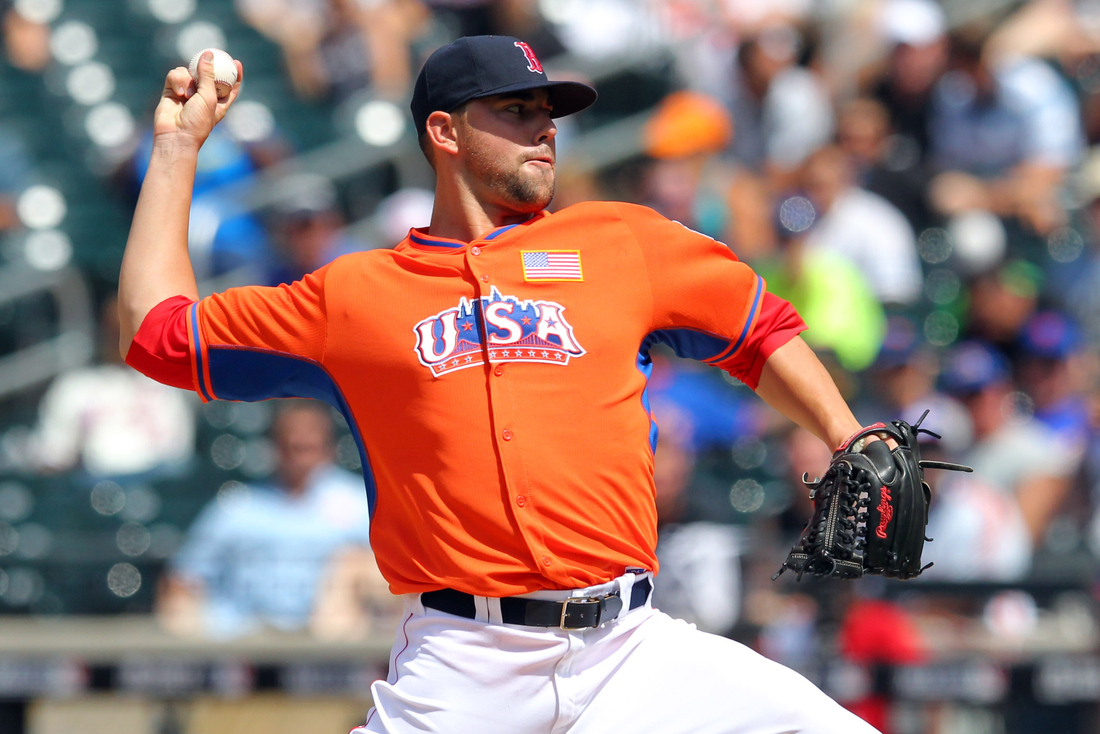 That's just the top arms: pitchers like Brandon Workman could very well turn out to be a number three or number four starter in the majors, capable of 180-200 innings consistently with average-ish ERA. Brian Johnson, selected in the 2012 draft, is another arm who could slot in as an average pitcher in the back-end of a rotation, and the fact he's left-handed means he'll get that opportunity. Looking even further to the future, 2013 draft picks like seventh-overall selection Trey Ball and second-round pick Teddy Stankiewicz should fill holes in the top half of a rotation once they've put in their time in on the farm.

SB Nation polled its network of team bloggers to recognize MLB's best, unfettered by any of the pretensions that warp the ballots for the "real" awards.

Digging deeper, pitchers like Corey Littrell, Ty Buttrey, Jamie Callahan, Daniel McGrath, Cody Kukuk, and Myles Smith could all turn out to be big-league starters. It's highly unlikely that this entire collection of pitchers reaches a league-average ceiling, of course, and we wouldn't suggest that's what will happen. There are only five rotation spots to fill, however, and among this massive pool of pitching prospects, there are likely five arms that will live up to their potential and keep the Red Sox from needing to invest in the next wave of Santanas and Nolascos.

The Red Sox don't need to avoid the free agent market entirely, as there will be moments, like in 2013, where someone like Ryan Dempster is needed to bridge between the present and future. Their prospect riches do give them an advantage over many other clubs, though, because they don't need to throw all of their resources at mid-rotation and fourth-starter options to help fill out the pitching staff, as they already have those candidates on hand, both now and for the foreseeable future. That flexibility will allow the Red Sox to use their money on free agents at other positions, deal from depth to fill non-pitching areas of need, and create a powerful bullpen from the ground up.

Not everyone has the same luxury, and when someone signs Ervin Santana for five years and $75 million in the next couple of months, you'll be glad the Red Sox do.