The Red Sox signed Mike Napoli to a one-year deal last winter, setting them up to deal with contract negotiations with the first baseman once more in this year's free agency. They have submitted the qualifying offer to him, guaranteeing them a compensation pick should he sign elsewhere -- it's a good thing, as both the Orioles and Mariners are reportedly interested in signing Napoli. 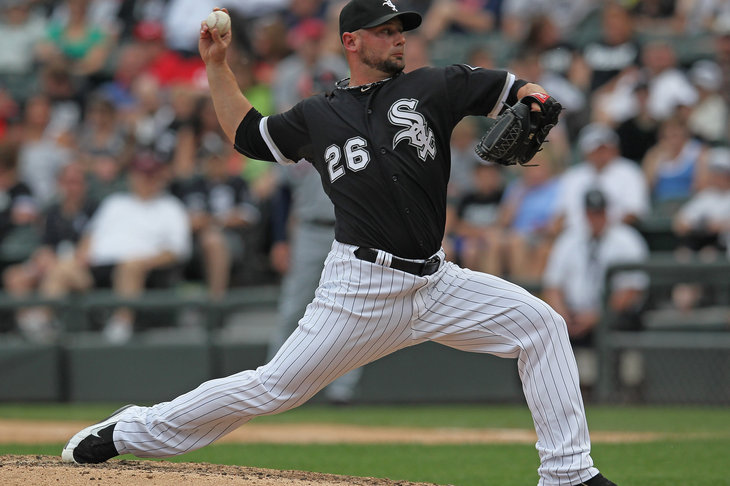 Jesse Crain may not fit into the "big name" category, but he could be a huge addition for the club.

According to Boston Herald Radio's Jen Royle, the Orioles would like to pry Napoli from the Sox, but will have to contend with Napoli's desire to re-sign with Boston. The Orioles already have Chris Davis at first base, so it's a little strange that they would target Napoli, but Danny Valencia also led their team in plate appearances at designated hitter in 2013, with the position as a whole producing a below-average .234/.289/.415 line -- there's room for Napoli's bat in there, and he and Davis could split time at first as well.

The Mariners' interest is no surprise, and was reported by FOX Sports' Ken Rosenthal. The M's attempted to acquire Napoli last winter, but couldn't pull the trigger on him despite the fact he was not going to cost them a draft pick. Rosenthal states that the Mariners believe right-handed power is their most-significant need this winter, and Napoli can certainly provide that. Like the Orioles, there is already a first baseman in place, but if Kendrys Morales signs elsewhere, there is room in Seattle for Napoli to play first base primarily. In addition, if Morales leaves, the Mariners will receive their own comp pick, since he was submitted a qualifying offer.

This could be an uphill battle for both clubs, considering Napoli is already on the record as wanting to come back to the Red Sox, citing the "unbelievable" way they've taken care of him, and Boston's need for a first baseman is as obvious as it was at this time last year. With Napoli's avascular necrosis seemingly improved with the permanent shift to first base, Boston is unlikely to be as nervous about a multi-year deal as they were after discovering the condition in the first place.