For the Red Sox, improvement not for sale

Brian McCann has gone to New York, and suddenly the market holds few attractive options for the Red Sox.

Share All sharing options for: For the Red Sox, improvement not for sale

Brian McCann has gone to the Yankees, leaving the Red Sox with few options to actually improve on the 2013 product in free agency. Even with three months to go before the beginning of spring training, it's already looking like Boston's best hopes will lie in the trade market.

It's not that there are no free agents left worth Boston's attention. It's just that most of them will only help to bring the team back towards 2013 quality, and those few who could make a big enough impact to push them above and beyond are not likely to make their way to the more spending-conscious Red Sox we've seen since the disaster of 2011. Robinson Cano? Yeah, right. They haven't been linked with Shin-Soo Choo either, and the writing seems to have been on the wall with Jacoby Ellsbury for a few years now.

Indeed, the most likely path for the Red Sox just gets them back to where they were, at best, at the positions that remain open. Corey Hart could replace Mike Napoli at first base, but that's a lateral move jn all likelihood. The same is certainly true of any of the remaining free agent catchers. Actually, a lateral move back there seems like a best-case-scenario when you consider the presence of career-year wonder Dioner Navarro and the headache that is A.J. Pierzynski. It's almost enough to make Jarrod Saltalamacchia greatest detractors cave. Almost.

Aside from Napoli, the one player significant enough to draw a qualifying offer that Boston remains "in" on is Carlos Beltran. And between his age and already declining performance both on offense and defense, there's no real reason to think he would be better than what the Red Sox had to offer in the outfield in 2013.

This is far from the end of the world, though. For one thing, the Red Sox don't need to be as good as they were last year. They won the division by six games over the Tampa Bay Rays, and if either Tampa Bay or one of the other A.L. East teams could provide a stiffer challenge in 2014, the Sox certainly still have some leeway to work with. Still, with two rookies set to take over players who, in Jacoby Ellsbury and Stephen Drew, were worth around 9 WAR (of either the Baseball Reference or Fangraphs variety), that leeway is not to be taken for granted.

It's also worth noting that the improvement could come from within, though that's a lot to ask for. The onus would largely be on Will Middlebrooks and, on some level, Dustin Pedroia and the rotation to improve on their 2013 performances. Middlebrooks is the obvious underperformer, but the possibility of Pedroia having a power resurgence with his thumb healthy or for the various members of the rotation to avoid their 2013 issues (Doubront's longevity, Buchholz' health, Lester's mid-season slump) seems much more realistic than expecting, say, Shane Victorino to be even better than he was last year, even taking his injuries into consideration.

All that, though, would only serve to ameliorate an underwhelming offseason. If the Red Sox want to avoid the need for that entirely, they'll have to hit the trade market.

Red Sox have talk with Dodgers about Kemp 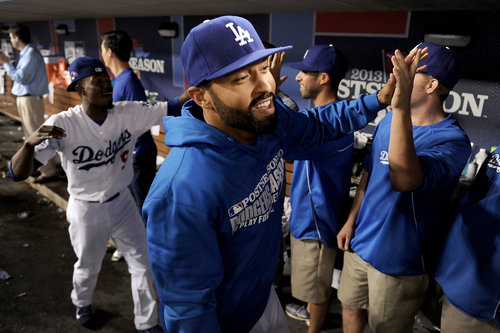 If the Red Sox want to go the blockbuster route, this could be it.

We've heard of Matt Kemp. We've dreamed of Giancarlo Stanton. And we've been enjoying Burke Badenhop's name for a few days now. Really, though, there's no telling where this takes the Red Sox if, indeed, they choose to leverage the depth in their farm system. It's impossible to count the number of trades that seemed obvious for both teams that never so much as made it to the drawing board, and those pale in comparison to the number that have come out of left field. Who saw Fielder - Kinsler coming before news broke?

Whether through an obvious deal, a rumored one, or something that leaves us double-taking our way into spring training, the trade market seems the most realistic way for the Red Sox to make the 2014 team something more than the 2013 team in transition to the next wave of young stars. There's nothing wrong, certainly, with letting the kids in Jackie Bradley Jr. and Xander Bogaerts take over. It had to happen eventually, and the hope is that in the long run they'll be every bit as good as the guys they're replacing. Better, even, when it comes to Xander Bogaerts.

Coming off a World Series year, though, expectations are different. On some level, it is World Series or bust again. Not any more so than for most other teams that have hope to contend in 2014, but simply put just being respectable would certainly not be the victory that it was in 2013. It's hard to ask a team that won it all in 2013 to make improvements, but other teams will be pushing the bill, and the Red Sox are not free of regression concerns themselves. The few good options in the free agent market seem to have eluded them, now they'll have to look elsewhere.