The Red Sox are in need of some insurance in the outfield with a capable glove. Los Angeles happens to have an extra one of those, making them a perfect match.

Part of the reason the 2013 Red Sox were so successful was their great outfield. By Fangraphs' WAR calculation, no team received more value from their outfield than Boston. With that in mind, it may not seem like outfield would be a top priority this offseason.

Well, they will more than likely be losing their center fielder, Jacoby Ellsbury, who will take a large chunk of that production with him. Luckily for the Red Sox, they have Jackie Bradley Jr., who can (hopefully) step in and make up some of that lost production. Even under that scenario, though, who is going to replace Bradley? He only had 107 plate appearances this year, but he was also the only depth player who could make up any defensive losses in the absences of Ellsbury and Shane Victorino. And that's not even mentioning the fact that it's impossible to have complete faith in a player as inexperienced as Bradley. With this being the case, the Red Sox need some insurance in the outfield. The perfect candidate could be had in a trade this winter. Let's talk Peter Bourjos.

The Red Sox already have a couple extra outfielders in Jonny Gomes and Mike Carp (assuming they start the year with Daniel Nava, Bradley and Victorino as their starters), but neither of them are very good with the glove, to put it lightly. Bourjos, on the other hand, is something of a defensive wizard. To best illustrate this point, consider the fact that he has forced Mike Trout - one of the best defensive center fielders in the game - to the corner. The metrics back up his defensive prowess, too, as his career UZR/150 is 20.2 (third best amongst all outfielders in that time), and has 33 Defensive Runs Saved, which is 8th best in that time, despite playing in a little more than half the innings of the other top players. Whether you prefer stats or scouting when it comes to defense, or a combination of both, Bourjos is an all-world center fielder, which is something this Red Sox team needs on its bench.

Offensively, Bourjos' game isn't nearly as polished. For his career, he has hit .251/.306/.398 (96 wRC+), despite showing real promise in his first full season, when he posted a 114 wRC+. The main culprit has been his lack of power recently, as he's had isolated power figures of .095 and .103 in the last two seasons, respectively. What he does have going for him is the fact that he's a right-handed bat, which means he could be used in some kind of platoon with Bradley, especially while Boston's young center fielder gets his feet wet. Bourjos hasn't shown any real platoon splits in his career (97 wRC+ vs. righties and 95 wRC+ vs. lefties), but Bradley could very well need nights off against tough southpaws. While his offense isn't great, a league-average right-handed hitter with his defensive abilities, as well as plus baserunning, is perfectly fine in this role. 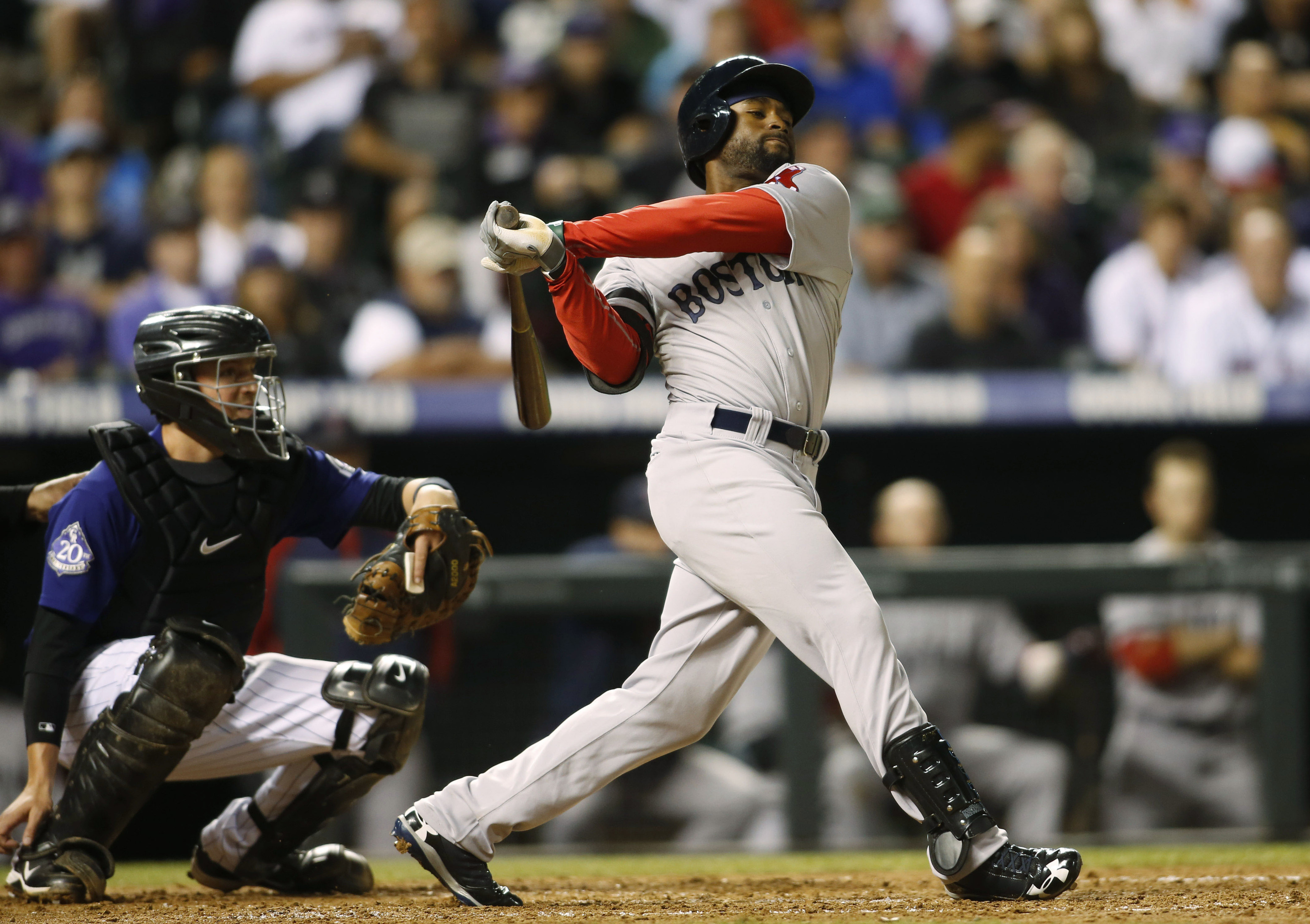 Bradley won't be the only outfielder who will need time off, though. While Victorino proved to be a great fit here, and put up outstanding numbers in 2013, he also missed chunks of the season, and played through seemingly constant pain. With his all-out style of play in right field, Victorino likely won't make it through many seasons unscathed. Bringing in Bourjos would give them ample depth in case Victorino went down, and could also allow them to rest their right fielder more often and help him make it through the season. Now, Bourjos has never played anything other than center field in his career, so it's possible they wouldn't want to trot him out in Fenway's right field with such little experience. However, he does have the range and the arm to handle it, and between him and Bradley, they could find a way to put together an above-average defensive duo in right and center field. All while preserving maybe their most valuable outfielder, Shane Victorino.

Bourjos is clearly a good fit for the Red Sox, so the next question would be how much will he cost? The Angels have reportedly been asking for starting pitching, and for good reason. Their rotation is in dire need of an upgrade. Luckily, that is an area in which Boston possesses quite a bit of depth. Since the Angels are in need of young pitching, they would presumably start negotiations with Felix Doubront. I would do everything I could to avoid that, as giving up a young lefty who has shown the flashes he has in exchange for a super utility outfielder of sorts would be a tough pill to swallow. Jake Peavy would be the next logical counter offer, and the front office would be smart to pay for some of his final year to make it sweeter for the Angels. If that didn't work, I'd even consider moving one of the young pitching prospects (non-Henry Owens division). None of the young arms figure to be top-of-the-rotation pitchers, and none are guaranteed to reach their ceiling anyway. It would be tough to part with a Matt Barnes or Anthony Ranaudo, but to clear up a hole in the roster with a young player like Bourjos, it could be worth it.

The Red Sox's biggest holes to fill this offseason are at catcher and first base, but they do also need another outfielder who can play center and right field. In Peter Bourjos, they can have that type of player. While he may cost a lot for someone who would appear to be a bench player, there is plenty of playing time to be had in this outfield. Jackie Bradley should be given the starting job to start the year, but having someone like Bourjos would help the team ease their rookie into the role rather than just throw him into the fire. Shane Victorino could also use some nights off throughout the season so he can be fresh and healthy for the stretch run. Throw in some time as a pinch runner and defensive replacement, and he would be an ideal trade target from Ben Cherington and the rest of the front office this offseason.