The Red Sox need a starting catcher for 2014 and one of the best defensive backstops in the game just happens to be available at a low, low cost.

With Jarrod Saltalamacchia hitting free agency, the Red Sox will need to find a starting catcher for the 2014 season. Christian Vazquez and Blake Swihart are down on the farm, giving fans hope for a productive future at the position, while David Ross and Ryan Lavarnway supply some immediate depth, but at least for 2014, a starter is needed. The Red Sox could go big and sign Brian McCann or play it safe and simply bring Salty back, but failing those signings, the best option might come from the trade market in the form of Reds backstop Ryan Hanigan.

Hanigan is coming off a dreadful year at the plate. In 2013, he hit just .198/.306/.261 over 260 plate appearances, but those numbers were largely the result of a ridiculous .215 batting average on balls in play. He has hit .262/.359/.343 in his career, for a wRC+ of 90. That is slightly below league average for catchers who posted a wRC+ of 92 in 2013, but as his slash line implies, his weakness is hitting for power. He is well above average at getting on base for any player, not just for a catcher. He walks in 12 percent of his plate appearances and strikes out in just 10 percent of them.

He isn't anything close to Brian McCann as a hitter, but he is only a small step down from Saltalamacchia's career wRC+ of 94. It is reasonable to assume that Salty will be better than that from now on, after he broke through with a 117 wRC+ in 2013, but the gap in hitting talent between the two is likely much smaller than 2013 indicates. Having Hanigan playing home games in Fenway could help further shrink that gap as well. While Great American Ball Park is great for right-handed home runs, it actually suppresses doubles and singles from righties some. The Red Sox home park is the best in game for RHH-doubles and above average for singles. A player like Hanigan, who has little home run power, might be able to make better use of Fenway's advantages than Great American's.

Of course, offense isn't the reason to get Hanigan. He probably won't kill the Red Sox at the plate and after watching Saltalamacchia's long swing push him to the bench in the playoffs, having a patience-and-contact hitter might be a refreshing change for fans. That is largely a secondary concern, however. Hanigan's calling card is defense. He has thrown out 40% of would-be base thieves in his career and led the league in caught-stealing percentage in each of the last two seasons. He also excels at fielding, blocking wild pitches and preventing passed balls, giving him the 4th highest Total Zone rating among active catchers. He rates well in pitch framing as well, saving pitchers around .22 runs per 100 pitches in his career, by Max Marchi of Baseball Prospectus' methodology. The Red Sox pitching staff was a major factor in their worse-to-first conversion and ensuring that they are comfortable and well-cared for behind the plate should be a top priority this coming season.

Hanigan is entering his final arbitration season and, in his projections of arbitration salaries for the 2014 season, Tim Dierkes of MLB trade rumors sees him getting a modest $2.3M salary next year. With McCann looking to command close $100 million this off-season and Saltalamacchia representing next-best alternative, Hanigan is an incredible value in comparison. He has averaged just over 2 fWAR per 400 plate appearances in his career and he carries some injury and decline risk in 2014, but a standard year of Hanigan would only cost around $1.1 million per win where the price-per-win for the alternatives should fall much closer to the $5-$7 million range typically paid on the free agent market. This certainly isn't to say that Boston would be wrong to sign McCann or Salty, but if their cost looks like it will rise above their value, Hanigan should be the first alternative they explore.

What's Plan B with Mike Napoli? 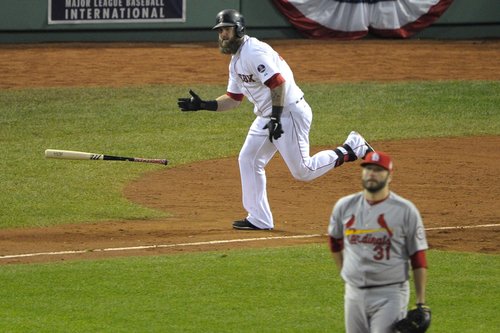 The hope around Boston seems to be that Mike Napoli will be back at first base next season. What's the course of action if he signs somewhere else, though?

There will obviously be a cost in prospects or current players as well, but that cost is one that the Red Sox are well-equipped to pay. The Reds could lose Shin-Soo Choo, putting them in the market for outfield help and that might make Daniel Nava or Jonny Gomes appealing to them. If Boston uses the money saved on a high-priced backstop on an outfielder like Choo or Carlos Beltran, losing one of those two would be an easy sacrifice to make. On the prospect side, Hanigan won't command premium talent after his off-year in 2013. Cincinnati has Devin Mesoraco as their everyday backstop and the just inked Brayan Pena as a secondary option, so teams can take advantage of their obvious need to move him to withhold top players. Boston's system is deep and strong up the middle, making them a good fit for the Reds' needs. Players like Sean Coyle and Tzu-Wei Lin are a few spots back on the Red Sox prospect rankings, but they would rank higher at their positions in the Reds organization, where they would also face a clearer path to the majors.

Hanigan isn't a sure thing, but he comes at a low overall cost and requires just a one-year commitment. After that, the position could go to Vazquez or Swihart. If those two don't pan out, Hanigan could be retained at a fraction of the Salty/McCann cost. This deal wouldn't make the Red Sox off-season, but it would address a real need at a minimal cost and offer solid upside in the process.