Maybe there never was a multi-year offer from Boston after all...

Last week, Yahoo! Sports' Jeff Passan reported that Mike Napoli was going shopping for a multi-year offer after receiving a presumably shorter-than-he-liked multi-year opportunity from the Red Sox. That might not be the case, however, as Boston Herald Radio's Jen Royle is reporting that Napoli received just a one-year offer from the Red Sox. 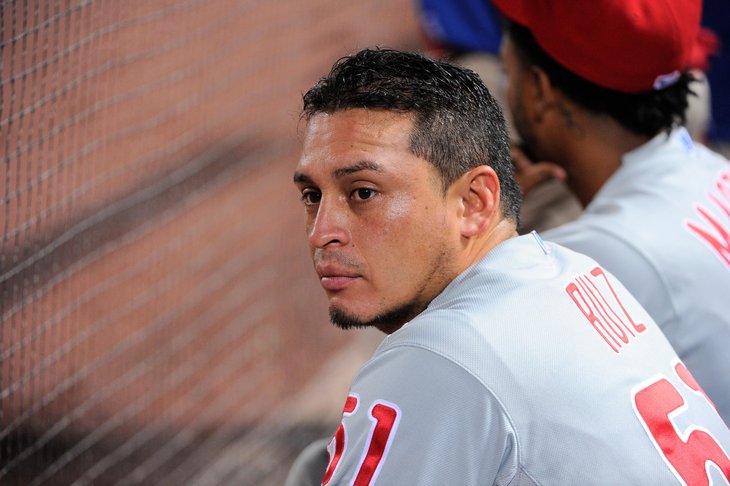 Philadelphia's negotiations with Carlos Ruiz might be turning contentious.

This deal was supposedly for more money than the $14.1 million qualifying offer that Napoli rejected, but obviously it wasn't lofty enough to convince Napoli to stop his search for a multi-year deal. Presumably, the Red Sox aren't offering more than they have to at this stage, instead letting the market help figure out Napoli's price tag in years for them. Napoli is unlikely to receive a two-year offer from anyone when he will also cost a draft pick for his new team, so the Red Sox don't need to worry until someone throws a three-year offer out there -- even then, if they aren't comfortable with three years, they can let Napoli walk, collect their draft pick, and either find a different first baseman or hand things off to Daniel Nava, Mike Carp, or whatever fallback plan they have in place already in the organization.

Chances are good that if someone offers Napoli three years, the Red Sox will come back with two at a loftier average annual value -- remember, one year ago, they offered Napoli a three-year, $39 million contract before the discovery of avascular necrosis in his hip cut him to a one-year pact. Chances are good they're still comfortable with the idea of Napoli through 2015, but maybe no further, as they were a year ago before knowing his hip could eventually turn problematic.

As of now, the Rangers seem to be the most significant threat to Boston's retention of Napoli, at least according to ESPN's Buster Olney. The Rockies and Orioles are also both reportedly interested, though, so it's not a two-team stare down by any means. Not yet, anyway.