He's coming off of a down season, but that's precisely why he makes sense for the Red Sox.

Jacoby Ellsbury is very likely not going to be on the Red Sox in 2014. His contract demands will be through the roof, and he could end up the second-highest-paid free agent of the entire class by the time the off-season is wrapped up. Because of this, the Sox are looking into backup plans, so as not to be left solely with prospect Jackie Bradley Jr. for center field. According to ESPN's Jerry Crasnick, free agent outfielder Chris Young fits the bill.

Young struggled in 2013, batting just .200/.280/.379 in 107 games for the AL West-winning Athletics. He'll be all of 30 years old in 2014, however, and batted a more aesthetically pleasing (and productive) .243/.331/.436 from 2010 through 2012. Most importantly, though, Young has a history of fine defensive play in the outfield, so even if his bat never fully returned to form, he could slide into center and perform for the Red Sox on the cheap, leaving Shane Victorino in right field where he belongs.

The Red Sox could just stick Bradley Jr. in center field and call it a job well done on Opening Day next year, but it's worth remembering a few things. For one, Bradley is all the Sox have for center field depth besides the aforementioned Victorino -- if something happened to Bradley, suddenly the Sox are looking at seeing Daniel Nava in right field and against lefties, with Jonny Gomes in the lineup daily. It's certainly livable, but also an avoidable scenario, and the Red Sox should want to avoid an outfield alignment where Victorino, in a position he was better suited for last decade, is the superior defensive player out there. Let's not even get into what happens if it's Victorino who goes down, as he did on quite a few occasions in 2013. 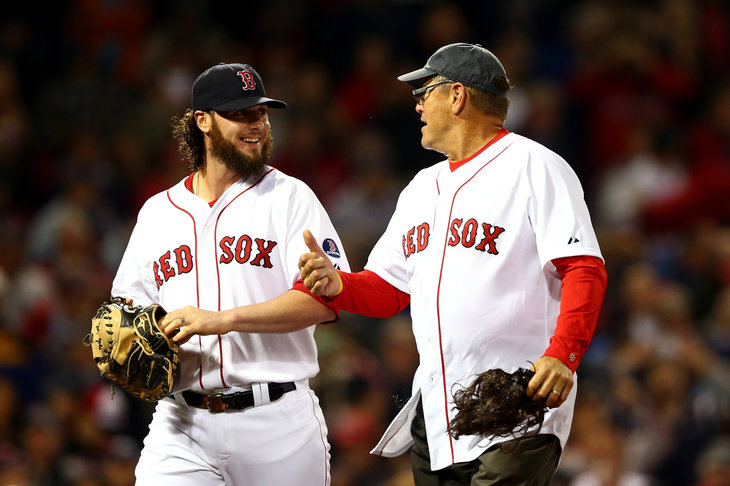 The Red Sox have made a two-year offer to Jarrod Saltalamacchia, but remain active in pursuing other free agent backstops.

Second, Bradley only spent limited time in the majors in 2013, but he hit all of .189/.280/.337 in 107 plate appearances and 37 games. He could shake that off and hit well enough to justify a starting role from day one in 2014, but it's not crazy to consider he might hit the ground hard instead of running in his first extended taste of big-league play.

Young won't be so expensive, and certainly doesn't carry enough clout following his awful 2013, to demand anything more than an opportunity to stick in center field from the start of the season. If he moves to a bench role, where he, rather than Nava (or no one, in games where Nava starts) is the superior glove off of the bench, than he's a useful piece for the Red Sox. He's also insurance in case it turns out Bradley is not quite big-league ready, and could use another month or two of seasoning. Right now, if it's not someone like Young, then it turns to Ryan Kalish to be healthy and around, and history has shown that's not a reliable backup plan.

The major question with Young is whether or not someone else will present him an opportunity that doesn't have a Bradley Jr. waiting in the wings, ready to snatch a starting job away the moment Young falters. The Red Sox can certainly toss Young a little more money to make that palatable to the outfielder, however, giving them an advantage that not every club could match.