The market has been set for Jacoby Ellsbury, and it's been set high.

Jacoby Ellsbury could receive a $142 million contract--better known around these parts as a "Carl Crawford"--according to Jon Heyman, who says that's the asking price laid out by agent Scott Boras.

It might not be the best idea to tie the value of your star to another speedy outfielder who signed for a massive amount of money before bombing so completely with his new team (even in LA Crawford produced all of 1.7 rWAR for the Dodgers this year). More importantly for the Red Sox, though, it seems like confirmation that Jacoby Ellsbury is not long for Boston. 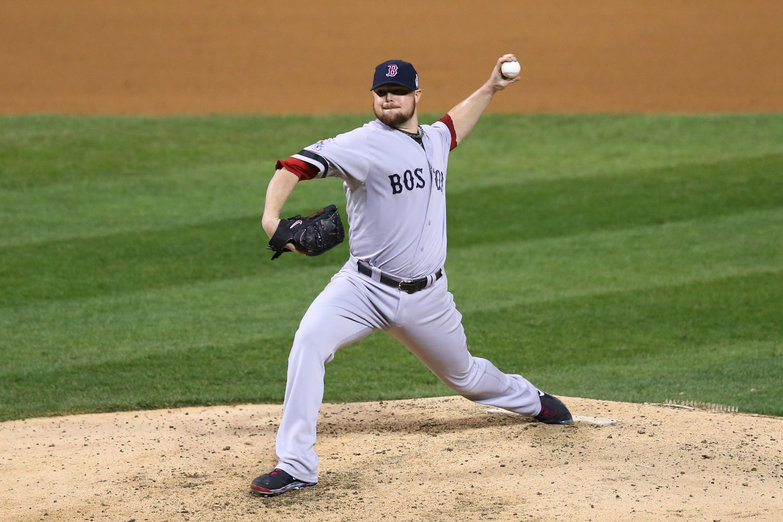 Now here's a home-grown player who might stick around.

That's not just because the Crawford experience went so wrong for them, either. While the Red Sox have to be willing to dip into the big-name free agent market at some point, but Ellsbury is not likely their guy. He's certainly a very valuable player when he's not being kept down by random collision-based injuries (no, he does not fit the typical "injury prone" profile), but they have a ready replacement in Jackie Bradley Jr., and if the market for Ellsbury ends up anywhere near that level, he won't really provide the excess value at the beginning of his deal necessary to make the overpay later on worthwhile.

The Red Sox certainly have the money available to them. And Ben Cherington is in a noticeably different position now than last offseason. But it would be a dramatic, surprising, and frankly concerning shift in philosophy to see them do anything more than due diligence in a market like this.