You know him, you love him, you've seen him drunkenly roaming the streets half naked.

It's easy to get sentimental about players coming off a World Series championship. Signing them resulted in a World Series win the first time, so, heck, do it over and let's all watch this crazy season on repeat in 2014! That's usually a flawed thought process for obvious reasons but in Mike Napoli's case, maybe it isn't.

Napoli is now a free agent. His agent will field calls and offers for him while he finds his shirt, thank you very much, but you'd have to think his price has gone up since Boston (finally) got his signature on a deal last season. But even if it costs more in terms of years and dollars than it did last season, the Red Sox are better off with Mike Napoli than with the next reasonable alternative. But if you need me to lay it out, fine. The Red Sox should re-sign Mike Napoli because he's the best free agent available at his position, he knows Boston, he's played successfully in Boston, and he's a very good player. Mostly the last part, but the other parts too.

How good is Napoli? He hit .259/.360/.482 last season, well above the league-average first baseman's slash line of .254/.332/.430. He took a ton of pitches, and worked opposing pitchers past the bone to the skin on the other side in the process. Yes, this approach means lots of strikeouts, but it means lots of walks too, and strikeouts are just outs anyway (mostly). Working counts, working pitchers, getting on base, and hitting for power were things we all knew Mike Napoli could do when he came to Boston, but you can now add playing above-average defense to that list as well. Defensive metrics rarely agree on anything (they're like my grandmothers at Thanksgiving that way), but they all liked the way Napoli played first base. Baseball Prospectus, FanGraphs, and Baseball Reference all thought Napoli was an above-average first baseman who added value with his glove as well as his bat last season. Basically, he's the kind of player the Red Sox thought they were getting with Adrian Gonzalez, only with more beard. 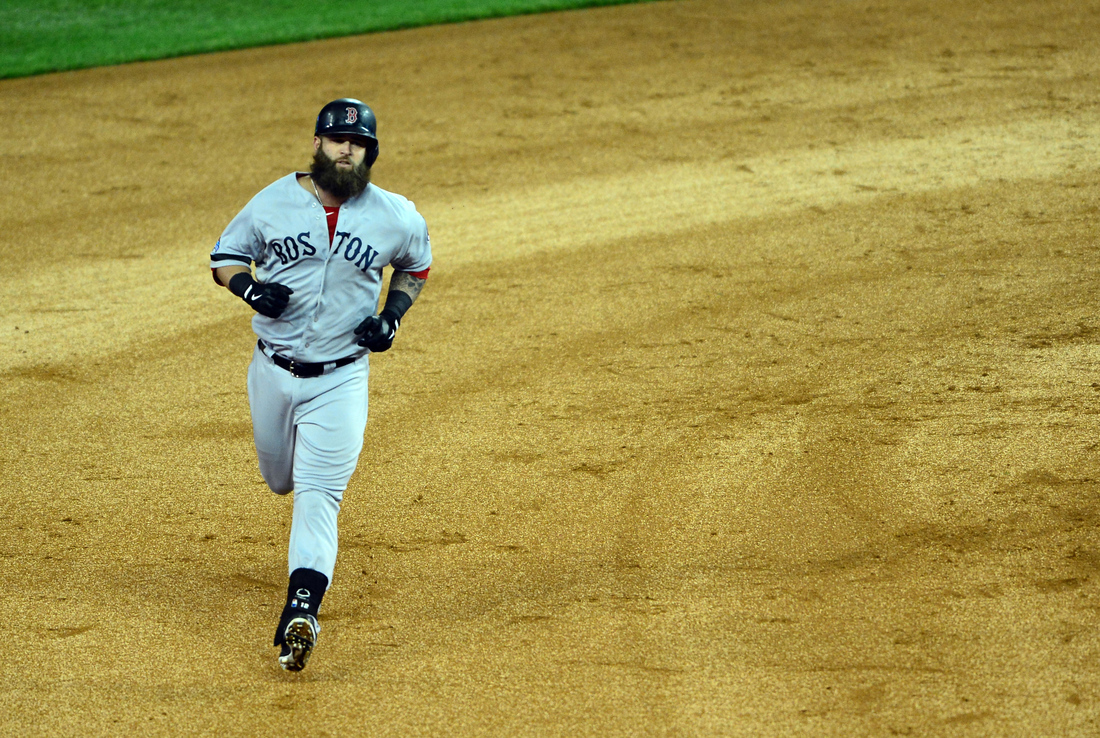 Beyond all that, Napoli was a good teammate and fit in perfectly in the bearded culture that took over the Red Sox clubhouse. These are all good things. These are all reasons to re-sign Mike Napoli.

And I'm here to advocate for that. Yes. Re-sign Mike Napoli! Of course, like anything, there is some (filthy) context to discuss. Napoli will be in demand for all the reasons the Red Sox want him, and he knows it too. Witness his turning down a $14.1 million one-year offer from the Red Sox, and deciding to shop around before deciding on Boston's multi-year offer. The power Napoli brings to the table is prodigious, and power is at a premium in today's game. A premium meaning it'll cost you money to sign him. Lots of money. The Red Sox have lots of money, so they can spend it on Napoli if they want to, and because Napoli turned down the qualifying offer, if he signs elsewhere that team will lose their first round draft pick. That's what economists and people who took economics 101 in undergrad call a... uh... um... [looks it up] a disincentive*! So in a sense, the Red Sox will pay less to sign Mike Napoli than any other team. That should drive down his price a bit. Or maybe not, but either way, information!

*Unless it's not called that 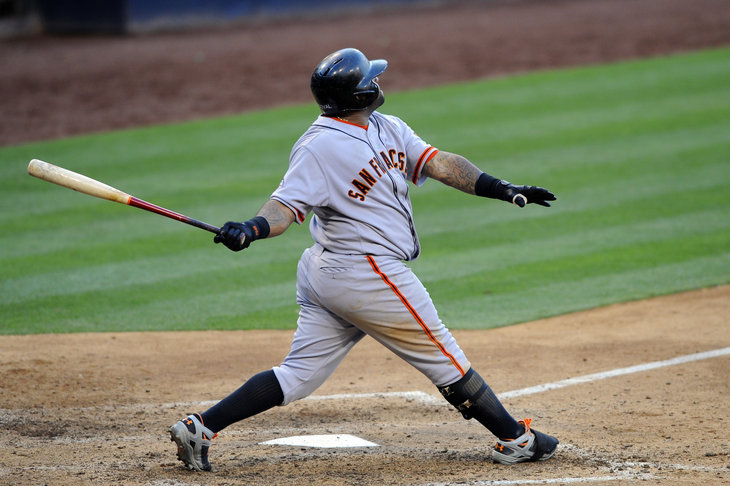 The Red Sox are looking for alternatives at first base in case Mike Napoli bolts, and Giants' third baseman Sandoval was one of them.

The Red Sox may have been hoping that Napoli would grab the qualifying offer, or that he'd re-sign quickly after repeating to just about anyone with a microphone that he loved Boston and wanted to stay. Now it seems that may not be the case. Napoli may be expensive. There are a lot of teams that want him. That means the bidding could get fierce. So what is too much for Mike Napoli? That's a tough question to answer without knowing the rest of the team's needs and their budget, but a three year deal for Napoli would buy his age 32-34 seasons. That's not exactly his prime, but not a time when his skills should fall off a table. In other words, the Red Sox should have a pretty good idea what they're getting and what they're getting should be something within spitting distance of Napoli's numbers this season.

So the team has the money, and they have the need too. Travis Shaw is having a nice few weeks in the Arizona Fall League but unless you're banking on Shaw or you're his mom, or both, there isn't much in Boston's stocked farm system that can step in and play first base in the near future. Napoli or [insert free agent here] is really it. Of course the Red Sox could trade for anyone else, but Napoli is the easiest and, ironically considering his hip condition, surest outcome the Red Sox can pursue. If the Red Sox can get Napoli for two seasons, do it yesterday. If it has to be three, if the dollars are reasonable you do that too.

This past season Napoli was worth, depending on which WAR you trust, 2.4 (BP and FG) and 4.1 (B-R) wins. We don't know how the market will flesh itself out until it does, but for now if we do the quick 'n dirty $5 million per win on the free agent market thing, that puts Napoli at somewhere around a minimum $13 average annual value. So would you give Mike Napoli three years, $40 million? I would. Hopefully the Red Sox would too.