Boston is not alone in their pursuit of the former Phillies' backstop.

One team has submitted a two-year, $20 million offer for free agent catcher Carlos Ruiz, but just which team is a mystery. Who it could be has been narrowed down considerably, though, as the Boston Herald's Scott Lauber reports that the Red Sox, Blue Jays, Rockies, and Ruiz's former team, the Phillies, are the four clubs in on the backstop.

This short list can be cut down even further, as the Rockies, per the Denver Post's Troy Renck, have submitted a two-year, $15 million offer for Ruiz, and won't go any higher than that, not when they already have Wilin Rosario behind the dish. That leaves the Sox, Jays, and Phillies as the team that could have submitted the $20 million proposal to Ruiz. [Update: The Red Sox are not the ones who submitted the two-year, $20 million contract to Ruiz, according to ESPN's Buster Olney.] 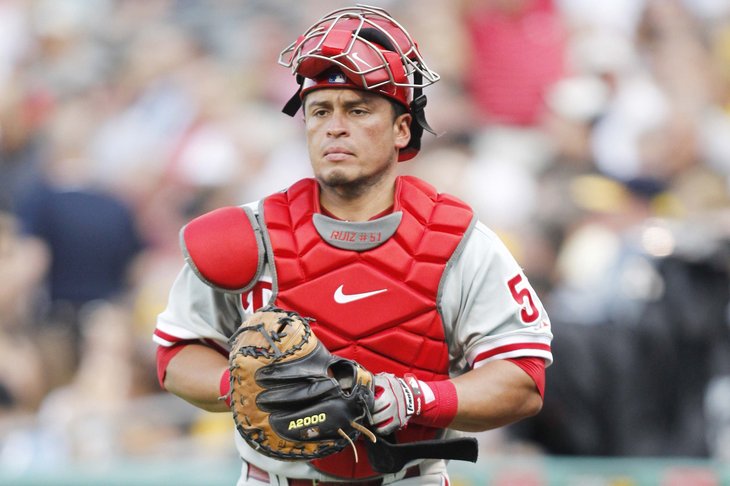 No one knows where it's from, but it's already on the table for the free-agent backstop.

The Jays are reportedly tired of J.P. Arencibia's defense and inconsistent offense behind the plate, despite his prodigious power, so their interest in Ruiz makes all kinds of sense. The Phillies have had Ruiz in their organization since signing him as an international free agent in 1998, and he's been their primary backstop since 2007 -- general manager Ruben Amaro has said that the Phillies want Ruiz back, but they won't wait around for him to make a decision, either. Then there are the Red Sox, who would like Brian McCann, but supposedly won't go as high on years or dollars with him as others, and maybe don't want to commit long-term to Jarrod Saltalmacchia unless they run out of other options first.

One of these three clubs submitted this offer, and any of the three would fit. It would fit the Red Sox, since they would be using their flexibility to pay maybe a little more than the market might for a player they want on a short-term deal. It would make sense if it came from the Phillies, as they have no clear successor to Ruiz around and Amaro tends to like to move fast and early in the off-season. The Jays also have the ability for a large payroll, and as already stated, want to move on from Arencibia as the primary backstop.

We might not find out which of the three teams submitted this offer until Ruiz accepts this or another one, but given how quickly things seem to be moving in that arena already, that might not be a long time from now.