The Red Sox have a need for a catcher, but it might not be McCann.

Share All sharing options for: Brian McCann free agency: McCann will 'end up with the Yankees'

The Red Sox didn't submit a qualifying offer to free agent catcher Jarrod Saltalamacchia, but are interested in bringing him back if a deal can be worked out. One thing that would keep this from happening is if Boston could come to terms with backstop Brian McCann, but that might not be in the cards. According to Rob Bradford, a general manager at the GM meetings stated that McCann is "going to end up with the Yankees," because they have the need, the money, and can afford to give up the draft pick since they'll receive one when Curtis Granderson bolts, anyway. 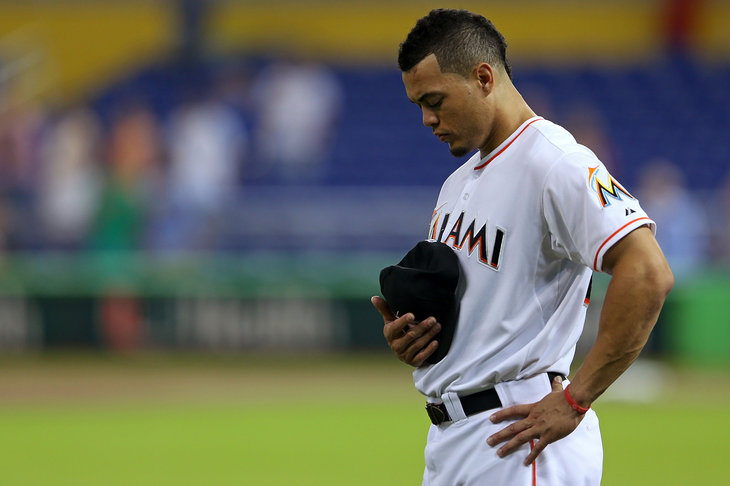 This offseason, there is going to be a lot of talk about the Red Sox swinging a deal for Giancarlo Stanton. It wouldn't be a wise move for the front office.

Now, this doesn't necessarily mean that the Red Sox are out of it. They also have the money, the need, and with at least Jacoby Ellsbury likely departing, can make up for the draft pick cost of acquiring McCann. Bradford says they might not be willing to go as many years as other clubs, however, and that could end up keeping him from Boston.

As for Saltalamacchia, losing out on McCann doesn't guarantee his return to the Sox, either. The Red Sox have a few different options in terms of what direction they want to go behind the plate. They could sign a short-term solution in an attempt to give Christian Vazquez and Blake Swihart, the future at the position, more time to develop in the minors -- Vazquez finished up 2013 at Triple-A, while Swihart, a 2011 draft pick, is expected to begin the 2014 campaign at Double-A. They could sign someone who will be around for a few years as Vazquez and Swihart make their way to the bigs, to give them even more time, but also to help prepare them for the role of major-league backstop -- someone like McCann, considered a superb defender, fits in there. They could also simply re-sign Salty to a reasonable deal and hope their young catchers are ready to go by the time Salty is on the way out, or close to it.

It's difficult to know, at this early stage, just which direction the Red Sox are leaning. Given the number of backstops they've been connected to already, however, it is clear that Boston is making sure they have plenty of options lined up so they have backup plans once the likes of McCann and Salty start to come off of the market.