This offseason, there is going to be a lot of talk about the Red Sox swinging a deal for Giancarlo Stanton. It wouldn't be a wise move for the front office.

On Monday, the GM meetings in Orlando got underway, marking the first big event of the offseason. Since front offices from all around baseball are all going to be in the same place for the next few days, you can expect plenty of trade rumors and speculation being floated around. In fact, this has already started, as Jeff Passan has reported that there will be talks between St. Louis and Colorado centering around Troy Tulowitzki. Along with the star shortstop, superstars like David Price and Max Scherzer will also find themselves in the middle of trade speculation. Of course, since it's the MLB offseason, we will be ready for more Giancarlo Stanton rumors.

Once again, the Red Sox will be linked to the young slugger in Miami. They'll be linked for good reasons, i.e. their lack of young power, stacked farm system, and large payroll. Even with all of those reasons -- and more -- for Ben Cherington to seriously consider making a blockbuster deal for Stanton, it still wouldn't be the best path for him to take. He'd be smart to let another team to make that huge move.

First, we'll get the reasons everyone wants him out of the way. His offensive talent is undeniable. In 2,002 career plate appearances, Stanton has hit .265/.354/.535, good for a 138 OPS+, along with 117 home runs in four seasons. The power gets all of the attention, and for good reason. He has a career isolated power of .270 -- trailing only Jose Bautista and Miguel Cabrera in that time -- and he's averaging 39 home runs every 162 games. In addition to this, he's shown good patience, walking in just over 11 percent of his plate appearances over his career. When you combine that kind of offensive ability with the fact that 2014 will be just his age-24 season, the league-wide lust for him is understandable.

However, there are reasons to be wary of trading for Stanton. Despite the fact that he's so young, he's already dealt with some nagging injury problems. These haven't been the Jacoby Ellsbury variety of injury, either, where he is just running into other players all the time. Over his career, Stanton has had injuries to his back, wrist, thigh, knees, shoulder and ankle. (Here's a list of his injuries over his career, according to Baseball Prospectus.) Most recently, he dealt with strained hamstring last season, an injury that kept him out for 41 days. Stanton is still too young to be deemed "injury prone," and he could very well have just been victim to bad luck to start his career. The question for the Red Sox, and all potential trade partners, is whether or not that risk is worth a huge package of prospects. 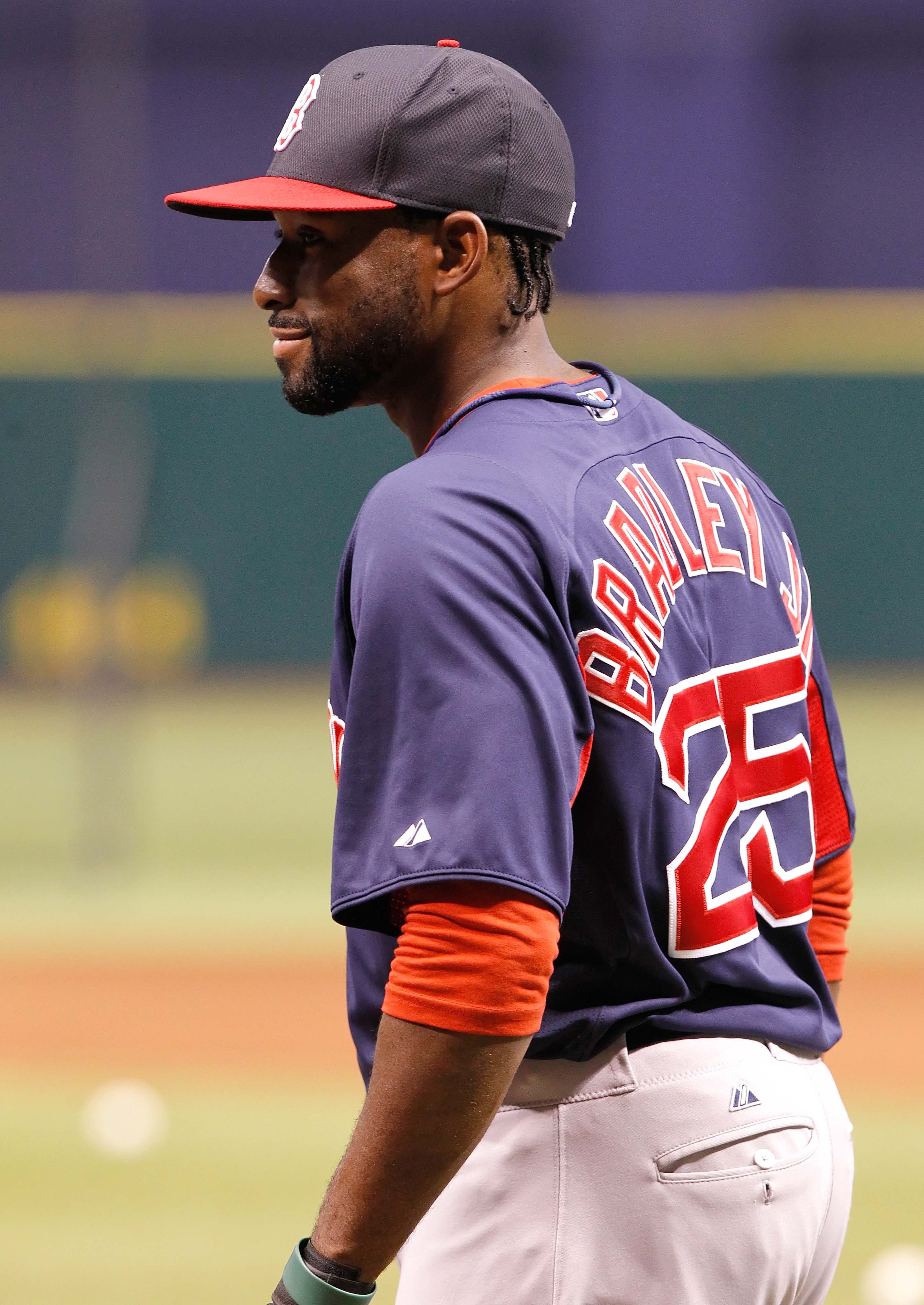 With those injuries come other concerns for the Red Sox. One of the biggest reasons people want Stanton is because Boston doesn't have someone who can man right field for the next decade, and he could be a long-term star. Obviously, though, Fenway Park isn't home to your typical right field. Shane Victorino played the strangely shaped right field amazingly this past season, which may have made it look easier than it is. With Stanton's defensive ratings being incredibly inconsistent as it is, he may not be able to stick in right field for as long as one may think. They could always shift him to first base and left field, but that just leaves them back to this spot, with no long-term solution in right field.

There is reason to be concerned about his offense as well. His power, of course, will translate wherever he goes. However, there is plenty of reason to be wary of his on-base skills. As I said above, he has been above-average at drawing walks, doing so 11 percent of the time. How much of that was due to being in atrocious Marlins lineups, though? If he is suddenly in a lineup surrounded by Dustin Pedroia, David Ortiz and Xander Bogaerts, will he still be able to walk as much? It is worth noting that, according to Fangraphs, he has swung at 33 percent of the pitches he has seen out of the strike zone over his career, and that rate has been worse than the league-average in every year of his career. He will still likely walk at an above-average rate, but it's fair to expect it to come down from his previous levels. 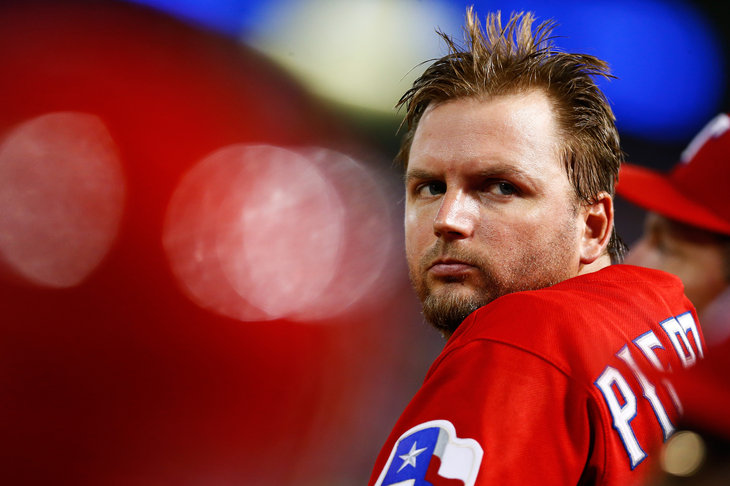 The Red Sox might be considering A.J. Pierzynski as a short-term replacement for Jarrod Saltalamacchia. They should stop.

None of this is to say he's a bad player. He is, along with Mike Trout, Bryce Harper and Manny Machado, one of the premier young players in the game. Having just finished his age-23 season, he's already established himself as one of the most feared bats in the game. Because of this, he's going to command a huge price, and I'm just not sure it's worth it given the trepidations from above. In any deal for Stanton, the Marlins would (rightfully) start the conversation at Xander Bogaerts. Now, that would be a nonstarter for Cherington, but it gives an idea for how serious Miami is about Stanton. After they got Bogaerts out of the discussion, Jackie Bradley would most likely have to be included, and Henry Owens would probably be in the conversation, too. Then, they'd likely have to dip into their talented pool of AAA pitchers, giving up one or more of Anthony Ranaudo, Matt Barnes, Rubby De La Rosa and Allen Webster. Finally, one would expect them to ask for one of Garin Cecchini or Mookie Betts. If the Red Sox are lucky, they'd be able to make that piece a Devon Marrero. Even so, they'd be giving up their best outfielder in the system -- who is major-league ready -- their most talented pitching prospect, at least one of their major-league ready pitching prospects, and one of their talented infield prospects. At that point, their deep and talented farm system has turned into one that is much more average, which could hurt Boston's payroll flexibility going forward.

It's going to be a long winter, and there are going to be a lot of rumors surrounding Giancarlo Stanton. He's a premier young player, and a lot of teams will be asking about him. Luckily for Miami, this interest means they can ask for a massive package of prospects in return for the young right fielder. Given his injury history and possible drop off in future value, Ben Cherington would be best served to hold off. The Red Sox currently own a stacked farm system, which can be used to fill up many holes on the roster both by promotions and smaller deals. It would be unwise to empty it out for one player with question marks.