Carlos Beltran wants three-plus years, and I want a 24-year-old Carlton Fisk starting behind the plate.

Red Sox target Carlos Beltran is looking for at least a three years in his next contract according to Tim Brown of Yahoo sports:

A week into the offseason, six teams have expressed varying degrees of interest in Beltran, a number that is likely to grow in a free-agent market that offers Jacoby Ellsbury and Shin-Soo Choo as the big-ticket outfielders and then Beltran as the three- or four-year alternative. That's right, according to sources, Beltran is no longer on the two-year plan he was after the 2011 season, though he remains adamant that he will go to a place where October baseball is most plentiful.

The biggest problem in all of this? Beltran is 36 years old, and will turn 37 shortly after the 2014 season gets underway. Any team making this commitment, then, would be on the hook to pay Beltran possibly through the age of 40, which might as well be 80 when we're talking professional sports.

Beltran, I'm sure, would point to his 296 games played over the last two seasons. Fair enough, he's been durable. But he's also certainly showing the signs of aging. Beltran hit just .296/.339/.491 last year--a reasonable figure, but certainly nowhere near the heights of 2011. In fact, outside of an injury-riddled 2010, it was the lowest OPS recorded by the outfielder since 2005, when he hit .266/.330/.44 in 151 games in his debut year with the Mets. His defense has also fallen off since his heyday with New York--further evidence that the outfielder is far from ageless.

The appeal of a player like Beltran is that, at 36 years old, they can't expect to command contracts of the same length as their younger counterparts. Even if they're complete flops, well, it doesn't sting for too long. Three years, though? That's starting to get into much more significant territory. And four? You've gotta be kidding. 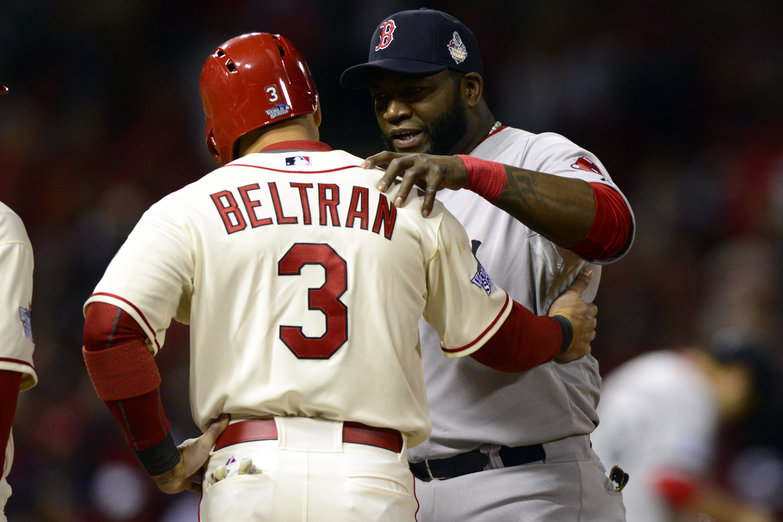 If Beltran is serious about this, then frankly it seems he's missing what it is that would make a player like him attractive to a contender. He isn't an elite player anymore. Fangraphs and Baseball Reference alike place him at about 3.5 wins in 2012 and 2.5 wins in 2013. Frankly, given his age, the $14 million a year the qualifying offer would have paid him is probably more than a player of that caliber is worth. But that's the bargain teams make--bigger money for less risk. Unless Beltran is prepared to take a significant discount to the point where he's basically playing that third year for free, though, he's trying to have his cake and eat it too.

Hopefully the Red Sox aren't the ones to give in to his inflated expectations.