How did the important match-ups turn out for the Red Sox in their first playoff series win since 2008?

Share All sharing options for: Red Sox vs. Rays ALDS Match-ups in review

Jon Lester was excellent in the first game of the series, pitching 7 2/3 innings and allowing two runs on three hits and two walks while striking out four. A major key to his success was his dominance over the key righties in the Rays line-up, including Evan Longoria.

Longoria was the fourth straight right-hander Lester struck out to start the game. In that at-bat, he offered Longoria nothing but fastballs, throwing four four-seamers and one sinker (by Gameday’s pitch types). Longoria took the first pitch for a called strike then fouled off the second and the fourth pitch, batting the last one into the glove of Jarrod Saltalamacchia. Lester was unable to find the zone in the second meeting, walking Longoria with four straight pitches out of the zone after getting a first-pitch swinging strike. Again Lester went with the fastball almost exclusively, adding one change-up in this meeting, but missing with it. Lester then got Longoria to ground out in the third and final at-bat by flipping the script entirely. He threw just one fastball- a 94 mph sinker on the third pitch- during this plate appearance first using his change-up, curve and then getting him on a cutter.

Read More: Who was the Red Sox' ALDS MVP?

Lester’s work against Longo was reflective of how he approached all the tough righties the Rays stacked against him. He mixed fastballs away and inside to great effect showing righties tons of hard stuff early and then went to a greater mix of off-speed pitches in the second and third times against them.

While Ortiz never got a chance against Rodney, this game did serve as an important reminder of just how useless player vs player numbers are in projecting performance. In the comments of this match-up article, Ortiz’s career line against Price (.216/.310/.297) came up along with the idea of sitting Papi against Price. Even ignoring the fact that Ortiz’s line is better than the average LHH against Price, it is never a good idea to mistake a 42 plate appearance sample for proof of anything. Ortiz hit LHP slightly below league-average by wRC+ in 2013, but he is still one of the best hitters in the game and he is more likely than almost anybody to exploit the failings of pitcher who has less than his best stuff. Fellow lefty Jacoby Ellsbury also had even bad numbers against Price (.212/.257/.455) but went 3-4 with an RBI double against Price. 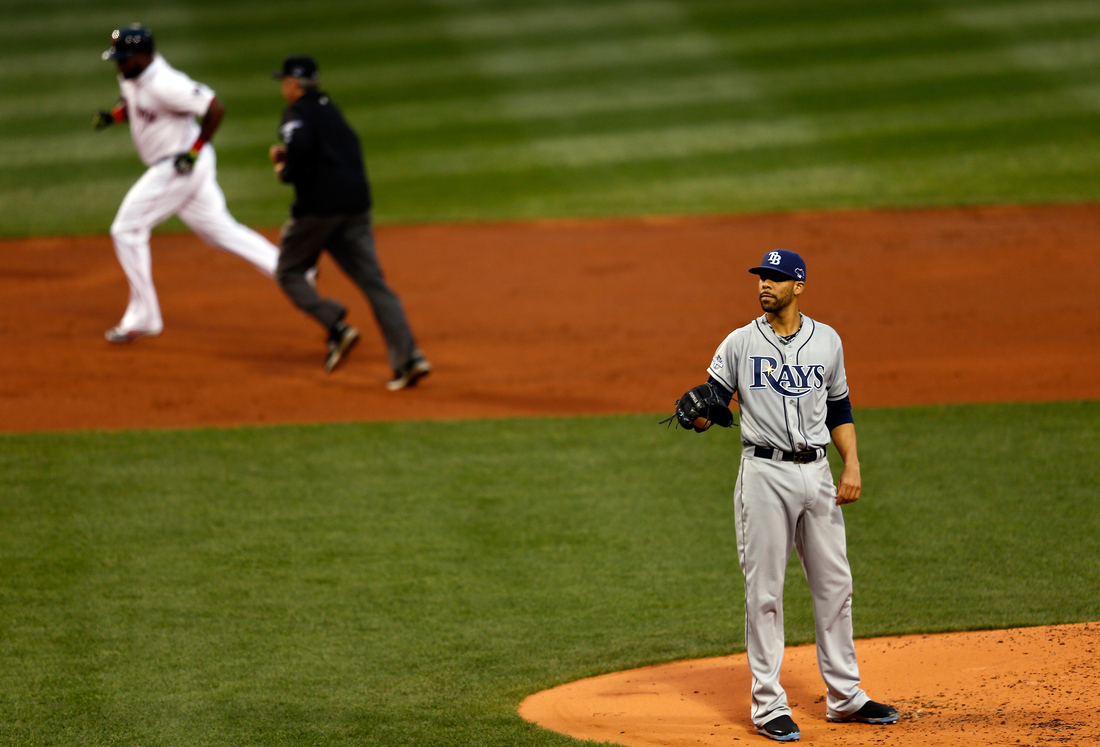 Rodney didn’t need to face David Ortiz to be out-matched by Red Sox hitters in this series, however. He was unable to hold the Rays one run lead in the ninth inning of Game 3 and he completely imploded in the final frame of Game 4. He was spared the match-up against Ortiz in Game 3 thanks to Farrell’s decision to pinch run Quintin Berry for Ortiz in the eighth and got Papi’s replacement, Mike Carp, to strike out to keep the game tied but overall his ALDS performance was a negative for the Rays. Control was the main issue for Rodney. He walked three batters and hit another, leading to two runs against him with two hits. He had already loaded the bases in the ninth inning of Game 4 by the time Ortiz reached the on-deck circle and was pulled against Dustin Pedoria in favor of Chris Archer, with Wilber Wright getting the call against Ortiz as made their final stand.

Both Zobrist and Pedoria factored into this game in major ways on the defensive side, but  unfortunately, both players were notable for their mistakes in this contest. Zobrist made a poor throw on the relay to first in the opening frame, turning a Dustin Pedroia double-play grounder into an unearned run.

Zobrist earned an error for that mistake and it lead to the first run of the game, but Pedroia’s big miscue, which doesn’t show up in the box score, was far more harmful. In the eighth inning, Farrell called on rookie Brandon Workman to get Yunel Escobar out with one out, runners on first and second and the game tied. Workman was able to get a ground ball up the middle and shortstop Stephen Drew made an excellent play on the ball. Unfortunately, Pedroia went after the ball as well, instead of breaking for second and he collided with his shortstop, preventing Drew from getting anyone out. Drew may have turned an inning-ending double play and almost certainly would have recorded the out at second if Pedroia had not interfered. Pedroia can be forgiven to some degree because it was a hustle play and it was never completely clear that Drew would reach the ball. Even so, the play changed the dynamic of that inning and the game. The failure to get an out allowed Delmon Young to drive in a run with a ground out, putting the Rays up 4-3. Pedroia redeemed himself to some degree by driving in the tying run with an RBI-ground out of his own, but his mistake loomed large after Jose Lobaton took Koji Uehara deep for the walk-off win. 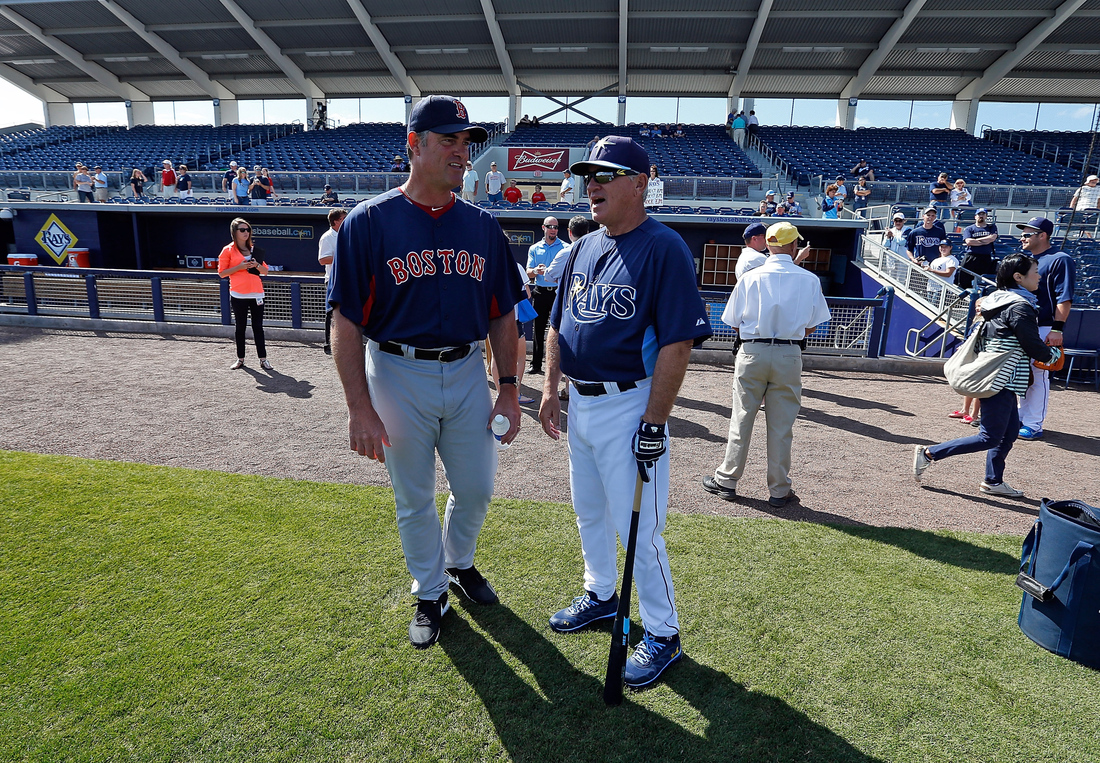 While Joe Maddon’s reputation as a baseball genesis is often overstated, he gave us an incredibly well-managed battle in the final game of the ALDS. Maddon was extremely quick with the hook, pulling starter Jeremy Hellickson when he loaded the bases in the second inning before getting an out and calling for new pitchers at the first sign of trouble. Maddon mixed and matched pitchers extremely well, emptying his entire bullpen as he tried to hold off elimination for a fourth time in the span of a week. It was a high-risk strategy that managed to keep the Rays in the game into the late innings but in the end it gave way under the Red Sox relentless patience at the plate. The Rays gave the Red Sox too many chances and when Maddon was left with lesser relievers like Jake McGee and Joel Peralta, the Red Sox finally broke through. 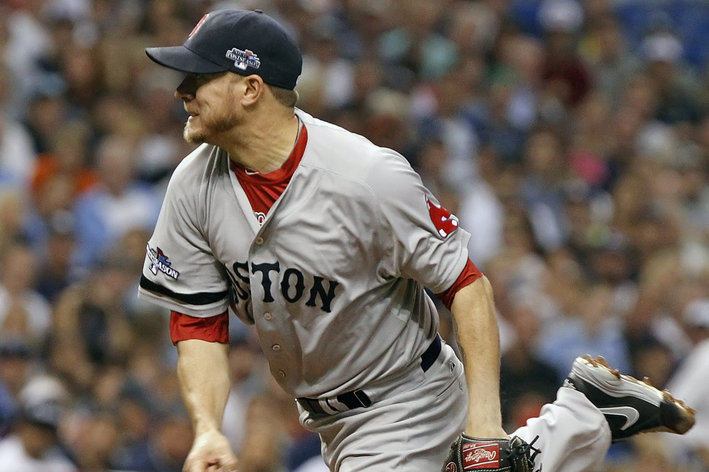 While Jake Peavy might have seemed like overkill to some, the series-clinching game reminded us all why his acquisition was key.

John Farrell was given a tremendous advantage in the final game in the form of Jake Peavy, as Marc discussed here . Peavy pitched 5 2/3 innings allowing just one run. That performance gave Farrell the opportunity to get more out of his top relievers late in the game and he did just that.  The Sox skipper heavily on Craig Breslow and ordering up a four-out save from Uehara to put this game away. While that advantage took some of the pressure off Farrell, his work in this game was every bit the equal of Maddon’s and possibly even superior. After Ben, Matt Collins and I all criticized Farrell for not using Xander Bogaerts in place of Stephen Drew late in Game 3, he made that exact move in Game 4. Bogaerts responded to his first taste of postseason baseball with extraordinaire poise, drawing a walk and flashing the high baseball-IQ prospect experts have been raving about with excellent instincts on the bases. He ended up scoring the tying run on a wild pitch and then walking again in his second at-bat and scoring an insurance run in the ninth.

Farrell was far perfect; he ordered an inexplicable hit-and-run with Daniel Nava at first and David Ross at the plate and called on Junichi Tazawa for one batter instead of just asking Koji to get five outs, but he utilized the best players for the situation far more often than not in a tight game. That is as much as you can ask from a manager and considering the way Joe Maddon managed against him, Farrell deserves a good deal of credit for his work in the final game.

The Red Sox will have to wait until Thursday to find out what match-ups are coming their way in the ALCS, but with the way they are playing right now, this Red Sox team measures up well to any challenger that comes their way.