Who was the Red Sox' ALDS MVP?

The Red Sox have emerged victorious in the ALDS. Who was the best of the best?

Share All sharing options for: Who was the Red Sox' ALDS MVP?

The 2013 Red Sox are headed to the American League Championship Series to play for the pennant! And now that we've got three days to spare in-between, it's time to talk about the really important stuff, like meaningless fake awards. Like the ALDS MVP.

We've only got four games to talk about. That's the nature of the short-format Division Series. But those four games proved ample time for some Red Sox to build impressive résumés. Let's go down the list...

Playing on a broken foot, Jacoby Ellsbury combined good hitting, good speed, and good luck in reaching base ten times for the Red Sox, scoring seven of their 26 runs in the series. His 10-for-18 performance is slightly inflated by bloops, but it all looks the same in the box score, and at the end of the day he was the constant on-base threat the Red Sox needed him to be at the top of the order. He even swiped one base per game, just to drive home how healthy he was.

Victorino has a .429/.556/.429 batting line. He drew exactly zero walks. It's a strange kind of performance that draws so much from the HBP, but Shane does not give ground, and the Red Sox benefited four times from his willingness to take the hit.

More than just going 6-for-14 and taking those hits, though, Victorino did exactly what he needed to when not at the plate, running down dangerous fly balls to spare Red Sox pitchers, and running aggressively enough on the basepaths to break up double plays and help the Red Sox score runs even when the man at bat couldn't really get the job done himself. Putting his body on the line for the team, Shane reminded us once again what it is we've come to love about him in 2013.

Papi rocked a .385/.556/.923 line in the ALDS thanks in large part to two huge homers against David Price. It wasn't quite the spread-out contribution of Ellsbury and Victorino, but given that David Price had given up two homers vs. LHH all year to that date, and it's certainly worthy of consideration.

The man who got it started just right for the Red Sox on the mound. He stumbled in the middle innings, and in the end the Red Sox managed to score 12 on Matt Moore, but his 7.2 innings of two-run ball would have been enough to win any of the four games. If that's what we can expect to see out of Lester going forward, Boston's ALCS opponent is going to have a tough time avoiding an 0-1 start. 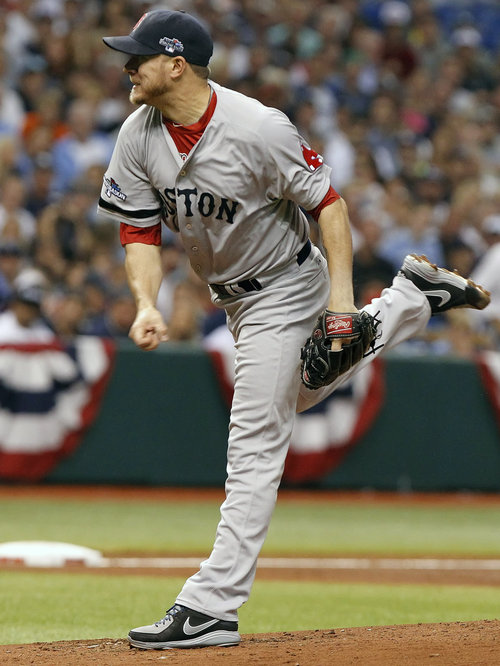 Peavy was in Game 4 everything the Red Sox had hoped for when they agreed to send Jose Iglesias to Detroit to secure the veteran starter. While John Farrell took an aggressive approach with the clinching game on the line, keeping Peavy from finishing the sixth, his performance in recording those 17 outs was arguably every bit as good as Lester's, and kept the Red Sox close enough that their pieced-together runs in the later innings were enough to clinch the series.

Who would have guessed it would be Breslow, not Uehara who was most deserving of consideration out of the bullpen? With Boston's relief corps the most questionable part of their roster, John Farrell did his absolute best to avoid turning to the worst half of the pen, putting an unusually high burden on the likes of Breslow, Tazawa, and Uehara. And more than anyone else it was Breslow who was called upon to shoulder that added burden, recording five outs in both Games 2 and 4. And boy, how impressive was he last night, striking out Tampa Bay's four most dangerous batters in order before returning to appear in his third inning, getting Delmon Young to ground out on the first pitch. Only an infield single broke up his perfection.

Anyone we forgot? Anyone want to argue for Xander Bogaerts of the 1.000 OBP? Do Dustin Pedroia's 5 RBI do it for you even considering his low OPS? Or maybe Brian Butterfield made all the right choices at third?

If so, make your case in the comments below.