Xander Bogaerts is the future in Boston. The greatest prospect the Red Sox have had since at least Hanley Ramirez got a chance to help out in the present, though, when manager John Farrell finally turned to him in a late-and-close situation with a left-handed pitcher on the mound. What our own Matt Collins clamored for Tuesday afternoon came to pass later that evening, and the Red Sox have advanced to the American League Championship Series because of it.

Let's rewind a bit, though. On Monday, with the Red Sox and Rays tied 3-3, Farrell left Stephen Drew in to face lefty reliever Jake McGee. Now, McGee has been working on some reverse splits, but he's also got serious velocity, and Drew has been helpless against all but the most hapless southpaws in 2013. You still want him starting, even against left-handed starters, thanks to his defense and the eventual arrival of right-handed relievers, but in this specific situation, in a tie game on the road with a lefty on the mound and the Sox in need of runs, Bogaerts would have made far more sense.

To Farrell's credit -- and he deserves it for changing course just a little more than 24 hours later -- he put Bogaerts in for Drew this time around with the Red Sox down 1-0, with McGee on the mound once more. Bogaerts drew a six-pitch walk, then went first-to-third on a single to right field by Jacoby Ellsbury. When Joel Peralta came on in relief of McGee to face noted lefty-masher Shane Victorino, a wild pitch was uncorked, and Bogaerts scored, tying the game at one. 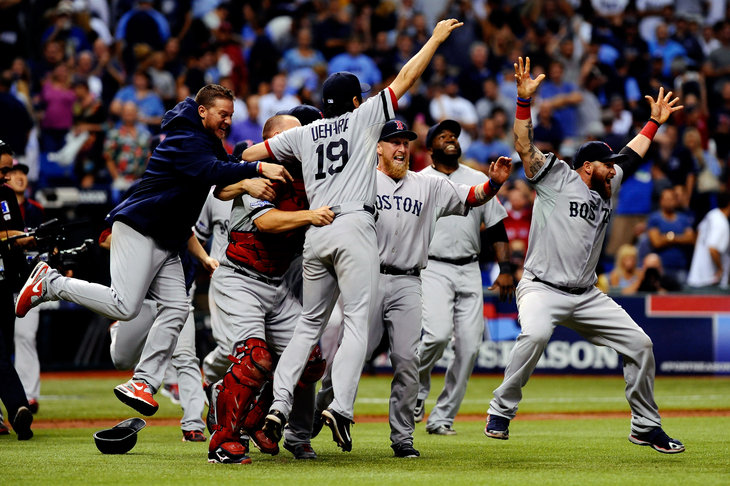 A dominant night of pitching and a couple of pieced-together runs in the seventh allowed the Red Sox to end the ALDS and secure a spot in the Championship Series.

Drew picked up just 10 walks against left-handed pitchers all season long. He only had 30 hits and a .268 batting average on balls in play against them, and struck out one-third of the time. It's not impossible that he would have reached base against McGee, but it was far more probable that Bogaerts, 20-year-old rookie or no, would. Farrell recognized this following Monday's misstep, and the Sox were rewarded with a tie game for it.

Bogaerts would come up to the plate against right-handed closer Fernando Rodney in the ninth, with the Rays desperate to keep things close before their final shot at tying things up. Bogaerts would once again draw a walk on six pitches, then advanced to second on a wild pitch by Rodney. Bogaerts would score the insurance run on a sac fly by Dustin Pedroia, allowing Red Sox fans to exhale ever so slightly in a game where Evan Longoria was still going to have a chance to bat.

The walks seem like a small thing, but they're significant. First off, the simple fact that Farrell recognizes the Red Sox are a better team when all of their parts are used where they fit best is a great sign. Then you have Stephen Drew buying into it in the post-game celebration, knowing that if Bogaerts is successful, it means the Red Sox are successful. Last, you've got this fact, unearthed by ESPN's Jeremy Lundblad:

Don't take that to mean Bogaerts is the Babe. He is, however, something of a baby in baseball terms, and seeing him succeed on a national stage in a high-pressure situation in spite of this is something else.