Most valuable Red Sox, ALDS Game 2: Defense, offense, or everything in between?

After Jon Lester brought home the win in Game 1, three key contributions put the Red Sox up 2-0 after Game 2.

Share All sharing options for: Most valuable Red Sox, ALDS Game 2: Defense, offense, or everything in between?

Yet again, the Red Sox put together a strong team effort. Every single player reached base safely, and the one who didn't pick up a hit (Mike Napoli) did so twice by way of the base on balls. The defense put together another strong game, and the bullpen picked up John Lackey's slack with 3.2 innings of scoreless baseball.

But this time the question of Boston's MVP of the game is not quite so open. I've narrowed it down to three:

David Price allowed two home runs to left-handed hitters all season long. David Ortiz hit two off of him in the span of eight innings. One put Boston up 2-0 in the first, the other sealed off the win by making it 7-4 with only Koji to go. There was nobody on base for either homer, meaning Ortiz did not directly contribute to quite so many runs as our other competitors, but they were certainly Boston's biggest hits, and it's possible that first one unnerved Price, with Boston's initial run having largely been not his fault.

Jacoby Ellsbury -- Three hits, one of them solid, playing part in four of Boston's seven runs

Jacoby Ellsbury led off the game with a bloop single, then stole second, moved to third on an error, and scored the first run on a sacrifice fly. In the third he brought David Ross home from second with a double that barely cleared third base, then scored himself, leaving him part of three of Boston's four runs to that point. While neither of his first two hits was exactly impressive, he finally managed to pick up a ringing single to lead off the fifth, eventually scoring Boston's sixth run. It's an offensive performance that looks a lot better in the box score than in highlights, but one way or another Ellsbury did contribute to better than half of Boston's runs on the night. 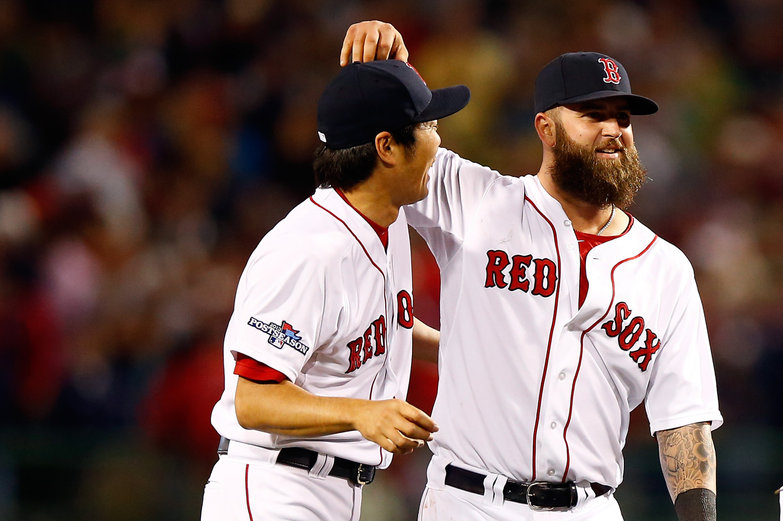 In case you needed to review the events to make your decision.

The man on the other end of all three of the runs Jacoby Ellsbury scored? Dustin Pedroia. The first two came on outs--a sacrifice fly in the first and ground ball in the third--before Pedroia finally got in the hit column with a solid double into the left field corner in the fifth. Perhaps more important than his offensive contributions though, Dustin Pedroia started two big double plays to keep the bullpen out of trouble, wiping out two consecutive threats from the Rays in the seventh and eighth, and getting the ball to Koji Uehara in the ninth.