The Red Sox are World Series champions--yes, I'm going to take every opportunity available to me to say those words--and there are some very fun GIFs from Game 6 to share.

Red Sox fans, desperate to avoid a Game 7, wanted to enjoy a more relaxing Game 6--something more akin to Game 1 than the tense wins in Games 4 and 5. Early on, it did not look like they were going to get that. Not at all. Some shaky--even bad--pitching from John Lackey in the first few innings was not damaging thanks to Jonny Gomes being in the right place in left field, and Dustin Pedroia being in the right place in...right field?

Also well placed was Stephen Drew, making this double play look mighty smooth and getting Lackey out of the third inning on all of five pitches:

Still, if the Cardinals were not taking advantage of their opportunities, the Red Sox were returning the favor, leaving three men on in the first two frames against Michael Wacha. That sounds even enough, but it really wasn't. Wacha looked like he was on, Lackey looked bad. The game needed to change in a hurry for things to turn out right for the Sox.

Good thing it did. The Sox loaded the bases in the third with a little help from an intentional walk to David Ortiz, bringing Shane Victorino to the plate. He is familiar with these situations in the playoffs. He likes them.

Not quite the ALCS Grand Slam, missing by just a few feet, but with Gomes sliding in ahead of the tag, a three-run double.

The next picture doesn't move, but it seems deserving of inclusion: 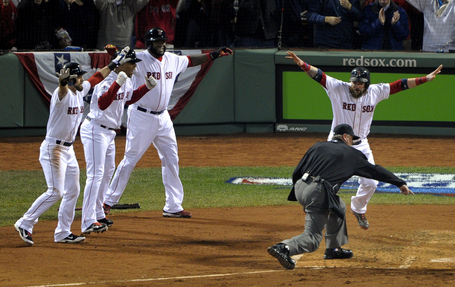 John Lackey, meanwhile, was not going to give up that lead. You want to talk about pumped up? How's this for pumped up?

Then, having held that lead, he was gifted with a fourth run in the bottom half of the inning, courtesy of...Stephen Drew?

Before the inning was over, the Red Sox would lead 6-0. Finally, Red Sox fans had their comfortable lead. There would be little need for worry as they worked through the final innings, save for a rough seventh where Junichi Tazawa came in and got the final out with the bases loaded, stranding all three inherited runners.

Not everything was bright and sunshiny, though. For instance, we likely saw Jacoby Ellsbury's last time on base as a member of the Red Sox. Luckily, he saw fit to leave us with this as a final memory:

By this point, though, Red Sox fans were mostly just waiting for Koji to come in for the ninth and finish it off so the celebrations could begin. Well...

For the last time this year, four beautiful words: The Red Sox win!