World Series 2013: This is what happens when it all goes right

No one will ever believe you, but the Red Sox are 2013 World Series champions.

Share All sharing options for: World Series 2013: This is what happens when it all goes right

The Bill Murray story goes like this. At some point between 5 and 10 years ago, someone was walking through Central Park when they felt hands over their eyelids. Shocked, the accosted person turned around and saw none other than Bill Murray, who had one mischievous message: "No one will ever believe you."

Before we get too far, here's a joke:

Q: What do you call a grown man who needs an instruction book for a straight razor?

A: A World Series champion.

Of course, even happy endings are endings, and as soon as this team reached the mountaintop, it ceased to exist, in a way. Those beards will soon be shaved for charity and/or decency and free agents will move on. This stinks! But in this moment, right now, we can dream our team and have it too. When you win it all-when you're that team, the team any idiot can see is the one who should-you don't want it to end. When Koji said after the ALCS that he wasn't sure all of this was real, could you blame him? Because who would believe it?

"Can you believe it?" That was Joe Castiglione's call in 2004, in 2007 and, presumably, last night. In both of those cases, I could. After the Yankees series in 2004 my emotions were war-torn, and the business Sox of 2007 were robotic in their dissemblance of the league, the near-fatal miss against Cleveland notwithstanding. In both years the Sox had entered as something approximating World Series favorites. We are well aware that this was not the case this year. After a baseball year that was as bad as you can get and an off-the-field event that existed outside the realm of the thinkable, this season was all positives. It was basically the absolute value of being a fan. 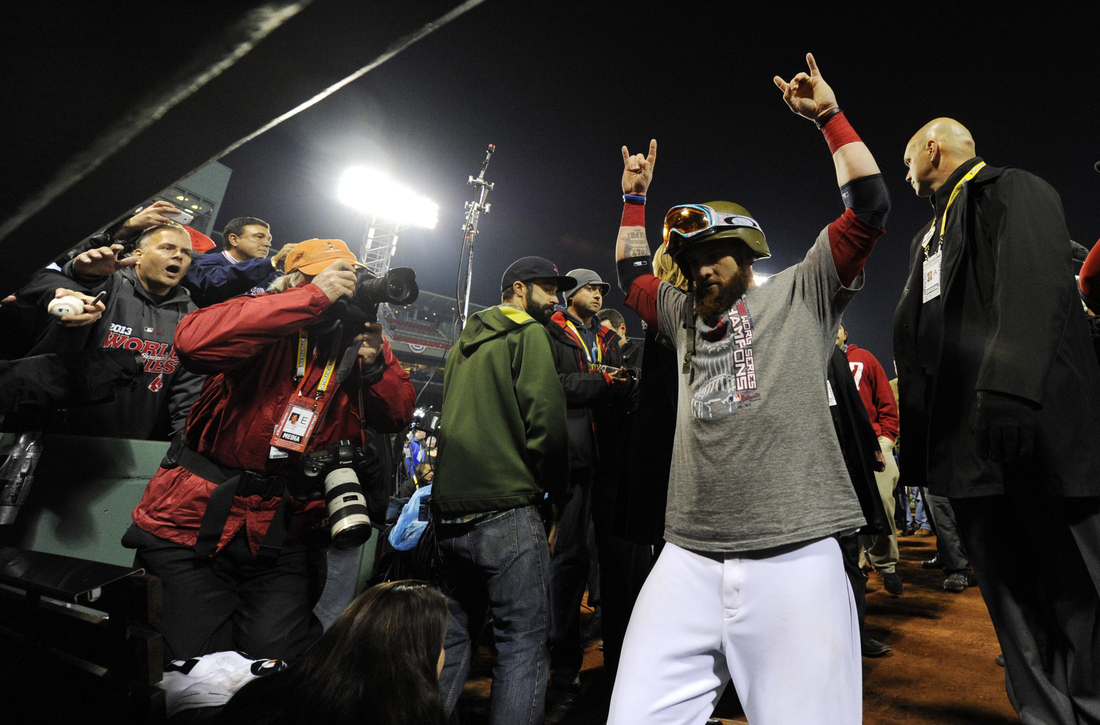 It took all kinds: From Shane Victorino to Mike Napoli, Koji to Nava to Gomes. Last night Jonny Gomes took a shot at statheads for shits and giggles, and he'd earned it. Do we make too big a deal over small things? Of course. That's what lovers do, and we love the Sox more than we can bear. The nickel-and-dime criticism of John Farrell this year was substantially no different than it is any year, and it was almost entirely accurate, but to Gomes & Co., the people inside the room, it was always silly, deep down, because the Sox had it the whole time. Almost every team believes this. For this team, it just happened to be true.

That's the craziest part. If you throw out 2011 and 2012 --forget them entirely -- and just track this team from the beginning, they're a juggernaut. But that's not how we live. We understood them as lost in the fog of past failure and they ended up pulling us right into this season, into an immediacy that great teams impose upon their fans. We lost some guys along the way -- Jose Iglesias and Daniel Bard, for their better and worse. We're going to lose Ellsbury in a few months or sooner. But we still have him right now, through the parade, and right now is urgent. It's so, so urgent. This is what it's about. 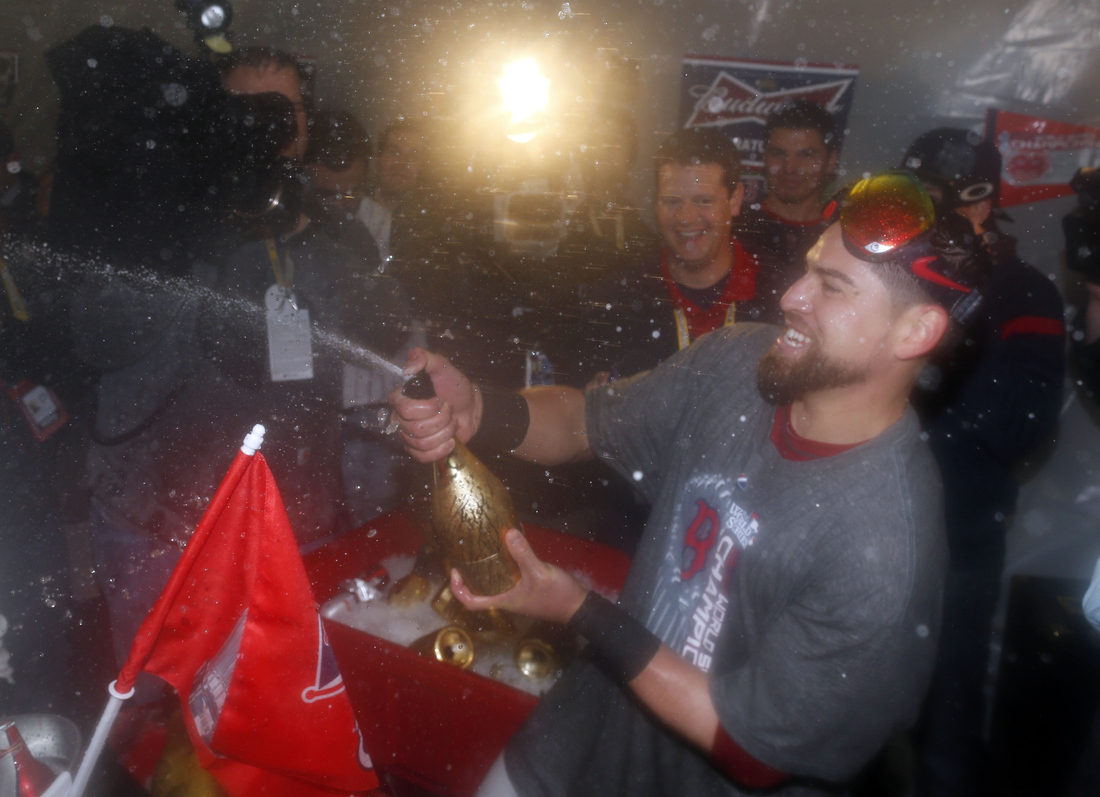 Here we are. That happened. As I type this, The FOX crew is wrapping up the postgame and the stadium is very slowly pushing out into a city feeling the effects of a stimulus of joy. The dude Marc Normandin tweeted it best in the immediate aftermath of the game: BEST BRIDGE YEAR EVER! We've had a lot of success across the four major sports in the last 10 years. A preposterous amount, actually, but nothing like this: A transitional year bitten by a radioactive spider. At some point, the narrative is perfect, and you can go no further. This was that. This is the resonant team of the era, and one that'll bounce off walls for decades. This was simultaneously a replay of the Impossible Dream and, unlike the '67 Series-losing team to the Cardinals, never quite in doubt.

This is what we call came for. The Red Sox won the World Series. These Red Sox won the World Series. David Ortiz now has a presposterous three World Series rings -- the first non-Yankee to do so for one team since Jim Palmer did it. Not bad for a Minnesota castoff. Dustin Pedroia has two, one for each of the mammoth home runs he missed by inches in this series past the left-field pole. Koji has one to go with his new de facto title of "best reliever in baseball" and adorable kid. 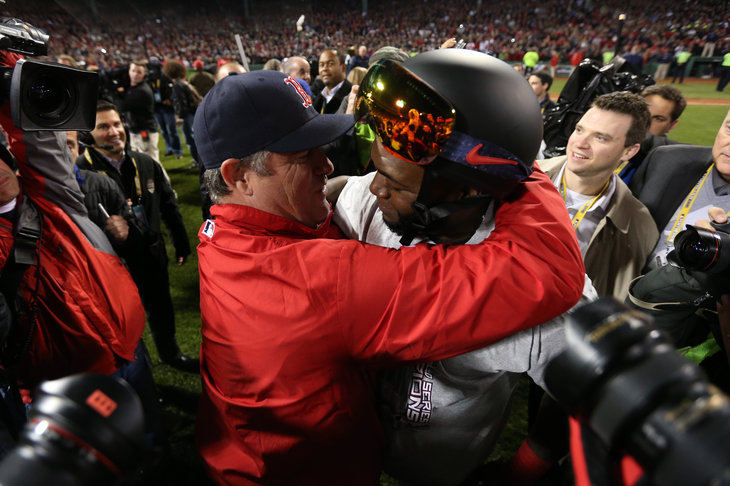 It comes as a great shock to us all, but the man who made only five outs in starting six games is the World Series MVP.

Now we celebrate. Younger and livelier fans will take to the streets, moving by forces they can't control, like an infant hopelessly flailing its arms and legs, the whole thing moved by the biology of excitement. The thinkers will try to figure out where this fits in the great recent history of narratives we've seen -- like a wonderful novel, it simultaneously feels familiar and entirely new at the same time. It's liable to send anyone back to childhood, and how they felt about the team in their younger and more impressionable days, when life and baseball players were equally mysterious, guided by an invisible hand that never seemed to make any damn sense.

This year, everything worked. That almost never happens. They usually have to force the narratives on us, but this one came too fast for even the modern media to unpack as it was happening; I have a feeling the story of this team hasn't even begun to be told. It's not an alchemy you can repeat. You had a pile of rocks, and now you're holding a pile of gold. No one will ever believe you pulled if off, because they know better -- they know that even if the story was true, they did win, well, they didn't have to win. Winning in the playoffs? As Billy Beane lamented in a different way, it's something of a magic trick. We can get into how this trick worked -- how this team pulled off what it did -- a little bit later. For now, the air is still potent. You feel that? It's real magic. Real traces of things we cannot understand, but bring us joy. We have a few days to live in it. Hold on as long as you can. Sometimes the best isn't in front of us or behind us. Sometimes it's right now. This is what happens when it all goes right.