Big Papi has put fear into the hearts of Cardinals pitching and management a like with his performance in the series and it is that fear that has made him so unstoppable.

The World Series heads back to with the Red Sox up 3-2 over the Cardinals. John Lackey will once again take the mound opposite ’s flame-throwing rookie Michael Wacha and the match-up that deserves the most attention is fairly obvious. I’m calling it David Ortiz vs. Michael Wacha because Wacha is the only pitcher likely to face Ortiz more than once in this game, but this match-up could just easily be called "David Ortiz vs. Cardinals pitching" or "David Ortiz vs. Mike Matheny." has been unable to get Big Papi out all series and with a Championship just one win away, Ortiz can end one the greatest World Series performances in perfect story-book fashion in Game 6. 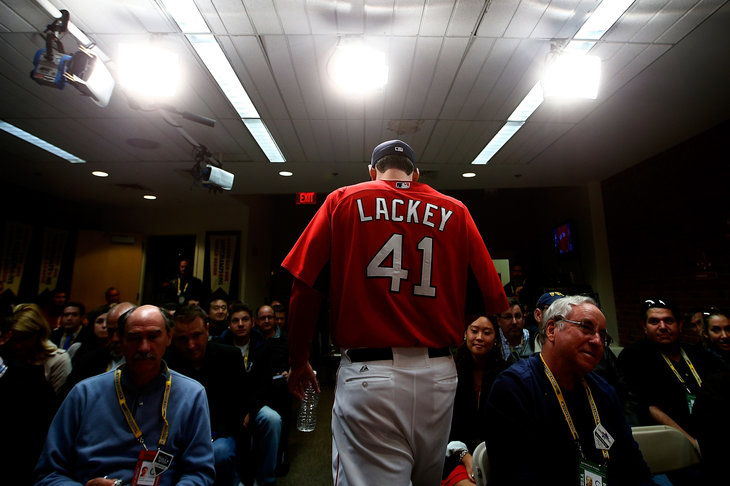 Let’s start with the video-game style statistics: Ortiz is 11-15 with two home runs, two doubles, four walks, six RBIs and 5 runs scored in the first five World Series games. That give him a ridiculous .733/.750/1.267 slash line and an OPS of 2.017. Oh, yeah, and it is also worth mentioning that one of the four outs he has made in this World Series was headed for the bullpen until Carlos Beltran snagged it to prevent a grand slam. In a career that has been full of heroic performances, David Ortiz has gone and broken baseball here. This is Bo-Jackson-in Techmo-Bowl type domination, not something that happen in real life.

Ortiz’s performance has naturally dissuaded the Cardinals from pitching to him. Lance Lynn issued Papi a four-pitch (basically intentional) walk to put the winning in scoring position in the sixth inning of Game 4. Adam Wainwright, one of the best pitchers in baseball, was even criticized for pitching to Ortiz in the first inning of Game 5, a choice that resulted an RBI double for the Red Sox slugger. At this point, Cardinals manager Mike Matheny may be waving the white flag, and not letting anyone pitch to Ortiz if it is even remotely possible to work around him. That would essentially allow the big man to reach base whenever he steps into the box, boosting his .750 OBP to an even 1.00 from here on in order to take way the chance of any more slugging. It is a strategy that will probably do the Cardinals more harm than good. Then again, the man is hitting .733/.750/1.267, so some departure from logic is understandable.

For Cardinals starter Michael Wacha, complete surrender would be a poor choice. Over at Fangraph’s David Cameron broke down the approach St. Louis has taken in pitching to Ortiz in this series and that article does an excellent job pinpointing the source of their struggles. Like the other Cardinals' pitchers, Wacha tried to stay away from Ortiz in Game 2, pitching him low-and-away to try to induce him to ground out. He was successful in the first at-bat, getting a grounder with a change-up below the zone away. In their second meeting, Wacha missed away with his first two fastballs, leaving him at an extreme disadvantage at 2-0. He got a called strike inside on a fastball before missing low with his next two change-ups for a walk. Behind in the count, he clearly did not want to challenge the large father with heat in the strike zone. The third meeting went much worse for Wacha, with Ortiz giving the Red Sox a 2-1 lead with a blast into the monster seats. The pitch Ortiz hit out was a change-up that stayed high in the zone. As in the second at-bat, Wacha missed away with a first pitch fastball. This time his second fastball away got too much zone, but Ortiz fouled it off. With the count 1-1, Wacha  then threw four straight change-ups inside to Ortiz, getting two balls and a strike before making that costly mistake.

This kind of pitch sequencing against Ortiz probably played to the Red Sox advantage. In that game Wacha changed speeds with incredible success against the other Red Sox hitters, as this chart from Brooks Baseball illustrates- 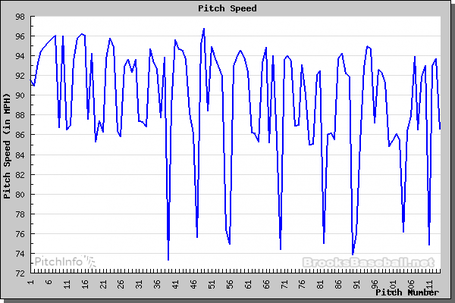 However, when facing the best hitter on the team, Wacha tried in vain to get ahead with heat and then abandon the fastball when he need strikes. With Ortiz’s patience at the plate, this strategy had little hope for true success and plenty of risk, as the final at-bat shows. With Wacha’s stuff, I would expect him to be more willing to challenge Ortiz with his fastball this time around, if he is allowed to pitch to him at all. While it is dangerous to come inside on Ortiz, he can be beat by fastballs up and inside. If Wacha is willing to risk another big hit and go there, he can become the first pitcher to effectively shutdown the Red Sox DH in this series.

It is hard to imagine that happening, however. Matheny doesn’t want to let Ortiz beat him so the idea of challenging him even more would probably sound absurd. As a Red Sox fan, I’d be more than happy to see the Cardinals stick with there plan. After all, it’s work so well that Ortiz is hitting 733/.750/1.267 for the series.