Share All sharing options for: Rating the Narrative Matchups

In January of 897, a curious and disturbing event took place in Rome. Pope Stephen VI had recently been elected to the papacy with the strong support of his patron, Duke Lambert. Lambert had been thwarted in earlier attempts at gaining the title of Holy Roman Emperor by the previous pope, Formosus. Not content with victory over his temporal opponents, nor with his chosen representative on the papal throne, Lambert persuaded his pet pope to inflict one final humiliation upon his predecessor. The body of Formosus was exhumed, dragged from its tomb, and placed on trial for heresy. Accusations were hurled at the rotting corpse for a day, after which it was disfigured and thrown into a commoner's grave. This unfortunate spectacle went down in history as the Cadaver Synod.

A distant echo of this can be found in the habits of our wondrous local media.* Winning isn't quite enough, there'll have to be some level of bloodletting and public shaming of past failures. So where does that leave us, with the Division Series about to get under way? Is there any way at all to avoid the deluge of critical storylines and coast through the postseason in a fine mood? (Other than just not reading them, which, come on, none of us have the self-control for that.) Let's look through the rest of the playoff field and see which teams might be acceptable opponents, in terms of least potential for aggravating narratives.

*There are plenty of exceptions, and you know we love you.

I don't know why Loney can suddenly hit either. None of us do. It's one of those inexplicable mysteries of the universe, like turtles returning to the beach where they were born or the ongoing appeal of The Big Bang Theory. The Rays and Sox have built up a nice little history over the years, back to the good old days when Tampa was the guaranteed 15-win base for Boston's record. There have been brawls, spats, the whole run. Throw in the continuing narrative of Joe Maddon, Genius of Geniuses, and this will be fairly bothersome. Not angry or hair-rending, but bothersome. I'm pissed that Cleveland didn't show up at all last night, but we may have dodged a chicken-and-beer shaped bullet on this one. Narrative annoyance: 3/5 CHBs.

At this point, the loss of Martinez to free agency is mostly forgotten, or at least not a concern. The presence of Salty and Napoli, I imagine, helps with that. The narrative more likely to pop up is the recent Jose Iglesias trade. Iglesias, of course, rose through the Red Sox minor league system on the strength of his glove. The worry was always his bat, which threatened to make Rey Ordonez look like Nomar. Then he came up to fill in for Stephen Drew and hit .400 for a while. This convinced many fans that he'd turned a corner, that he was the new shortstop of the future. These fans were known as "people who'd never been to Pawtucket." Fortunately, that offensive overachievement, combined with the great glove, convinced Detroit that he was a worthwhile pickup. Iglesias has hit a much more likely .259/.306/.348 with the Tigers. Regardless, if Peavy scuffles even a bit in the first round, expect a wave of "why'd we trade Iggy" shouting. Narrative annoyance: 2/5 CHBs.

Yeah, I had tried to forget that Colon was on the Sox, too. Crisp shouldn't be an issue, he was bumped out of his starting role by Jacoby Ellsbury back in '07 and everyone seemed quite comfortable with it. Moss was part of the Manny Ramirez-Jason Bay deal way back in the day. Lowrie and Reddick are where any annoyance could emerge. Both were traded for ultimately ineffective relievers (Melancon for Lowrie and Bailey for Reddick). Reddick was a bit of a fan favorite, and in a 2012 season that saw the outfield ravaged by injuries, his absence was notable. Lowrie, on the other hand, is the classic guy who was just never healthy. Ever. And this year he has been, which is great. Given the emergence of Koji, the solid outfield, and Stephen Drew's steady play, the "look at these former Sox" seems more likely to be a minor side note rather than a looming plotline. Narrative annoyance: 1/5 CHBs. 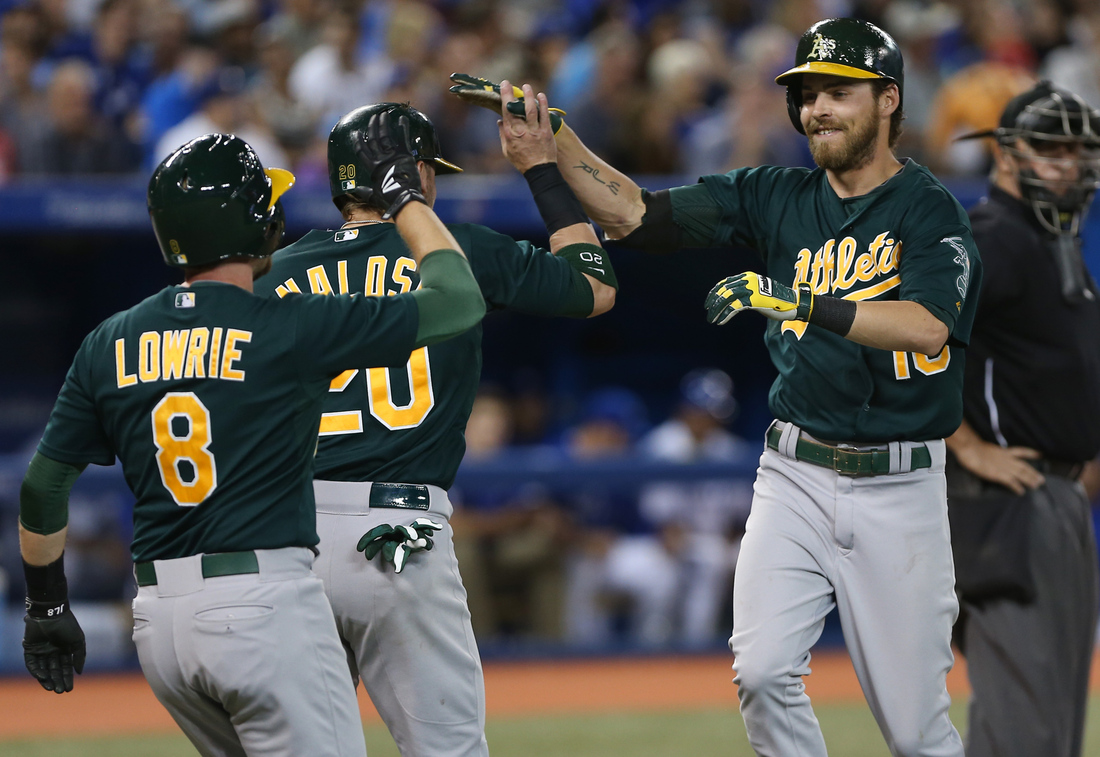 The Braves used to be in Boston, I guess? Also it seems like if Papi styles a home run or Jonny Gomes punts anything, Brian McCann would likely try to break down the Monster with his fists. This would probably be a nice, boring, relatively narrative-free series. But if anyone wants to write up "Salty Goes South: Revenge of the Perm," I fully support this plan. Narrative annoyance: 0/5 CHBs.

Another team with not too much recent player history. Of all the remaining teams, though, St. Louis definitely has the most actual playoff history with the Red Sox. They beat Boston in the 1946 and 1967 World Series in a pair of seven-game epics, and were summarily dismissed by the 2004 Sox. That will come up, and someone will stretch to find parallels between Enos Slaughter and any current Cardinal (Fun fact: the Cardinals, top team in the run-producing smallball NL? 45 total steals, or seven fewer than Jacoby Ellsbury alone.). That Boston and St. Louis are the only teams in the 21st century to have two titles will likely come up as well. Overall, the stories around this series will probably stick to baseball. Narrative annoyance: 0/5 CHBs. 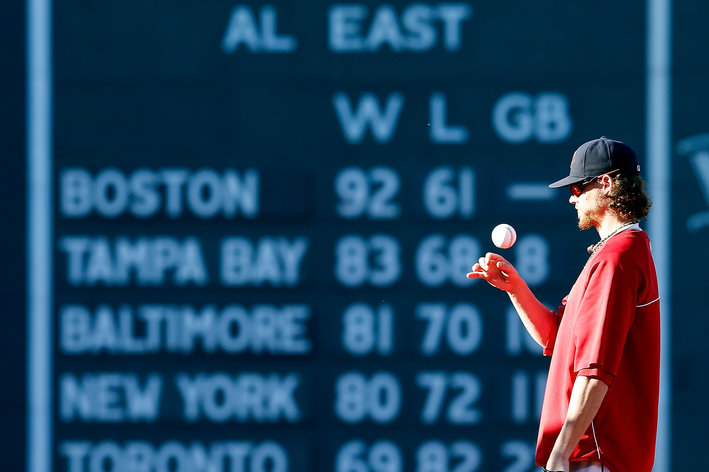 Whether it was setting the tone in April, showing up strong after an injury, or just pitching better than any starter on a per-inning basis, here, ladies and gentlemen, is your 2013 Boston Red Sox MVP: Clay Buchholz!

Pimentel, of course, never pitched in the bigs for Boston, but was part of the Joel Hanrahan trade. Byrd will be a fun reminder of 2012, as he played 34 games as a fill-in outfielder here before getting suspended for a positive PED test (which is fine, now, apparently, because steroid outrage has the logical consistency of a drunken ferret). Melancon will be the subject of some fun-making, since he was the centerpiece of the aforementioned Hanrahan trade. He was terrible in Boston, but great in Pittsburgh, which proves something because divisions are all the same and relievers are well-known for being consistent year-to-year. Regardless, a 1903 rematch would be awesome. Narrative annoyance: 1/5 CHBs.

And here's where the serious ass-pain will lie. There's actually some fun storytelling to be done here. The Punto trade really remade two franchises overnight, and a full-on analysis of the Dodgers' thought process would be amazing. But that won't happen, at least not in the main channels. It'll be another run of Carl Crawford answering the same five questions about why he hated Boston. Adrian Gonzalez's facial expressions will be broken down in slo-mo to figure out if he's truly happy now. There'll be a lot of talk about Josh Beckett, even though he's inactive. Someone will dredge up Bobby Valentine to talk about mindset and grit. The thought of the local guardians of baseball virtue interacting with Yasiel Puig is frankly too awful to contemplate. Fun though the Dodgers are, I think better for all of us that they humiliate the Braves on their home field and then bow out before getting to Boston. Narrative annoyance: 5/5 CHBs.

In sum, I think we'll all have a much saner October with a defeat of the Rays in the first round, Oakland in the second, and St. Louis in the World Series. Here's hoping.