The minor-league season isn't truly over yet, as the continued success of Boston's farmhands reminds.

We understand if your focus has been on the Red Sox, given their run through the playoffs that now has them one victory away from a World Series championship. There is still minor-league baseball happening in the Arizona Fall League, though, and like every other farm league in 2013, there are also Red Sox prospects impressing scouts. Two of them, Mookie Betts and Garin Cecchini, have been named AFL all-stars. 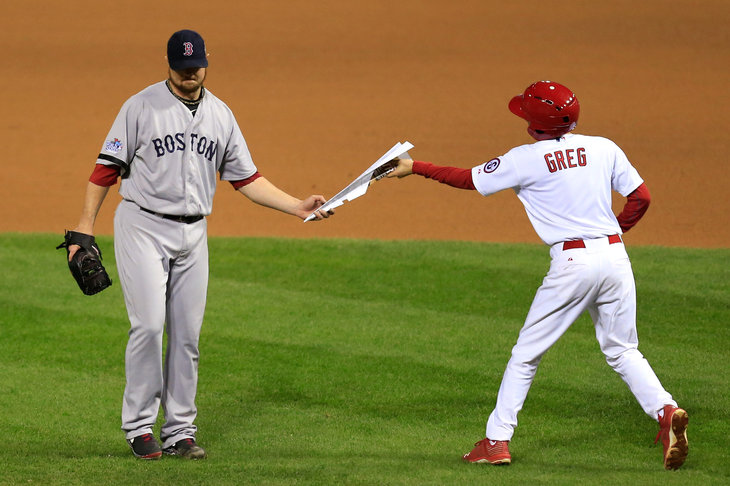 A recap of Boston's 3-1 win over the Cardinals in GIF form.

Betts wasn't initially joining the AFL at all, but an injury to Sean Coyle opened up a spot for the second baseman. Betts began the year at Low-A Greenville, and poorly, but quickly reversed course and mashed his way to a promotion to High-A. Betts was so good with the Salem Red Sox that starting at Double-A as a 21-year-old is not out of the question. All told, Betts hit .314/.417/.506 with 38 steals in 42 chances in the regular season. While he hasn't been quite as eye-popping in the AFL, at .233/.324/.300, it's also important to remember that it's been all of nine games, and Betts turned 21 earlier this month.

As for Cecchini, he also tore through High-A, and would have led the Carolina League in just about everything offensive were he not promoted to Double-A mid-season. The third baseman hit .322/.443/.471 for the year, posting a .420 on-base percentage with one fewer walk (51) than strikeouts (52) despite his youth and inexperience at the level. The 22-year-old hasn't shown much power in the AFL, but has posted a .412 on-base percentage with nine walks against eight strikeouts in his 11 contests. Cecchini could return to Portland to team with Betts in 2014, but it's likely that, with third base open at Triple-A Pawtucket, he'll get a head start on International League competition instead.

The Arizona Fall League All-Star Game will be played Saturday, November 5 at 3 pm EST, and will be broadcast on MLB Network and streamed on MLB.com.