Matt Holliday has delivered some of the biggest hits for the Cardinals in this World Series, but Jon Lester has the tools to shut down the St. Louis slugger in Game 5.

After tying the series up 2-2, the Red Sox will send Jon Lester to the mound against Cardinals ace Adam Wainwright in a rematch of Game 1. Lester dominated that first game, shutting out the Cardinals for 7-2/3 innings and allowing just five hits and one walk while striking out eight. Boston's lefty has been masterful throughout the playoffs, allowing five runs in 27 playoff innings while striking out 22. He will be looking to add another gem to his already impressive postseason resume in Game 5: shutting down Matt Holliday in the middle of the Cardinals lineup could be an important key to his success.

Holliday was one of the few Cardinals hitters to have get a hit against Lester in Game 1. He hit a first-pitch fastball into center for a single in the first inning. Lester got the best of him the second time through the order, however, striking him out swinging with a 75 mph curve that dropped just below the zone. In the final meeting of the first game, Holliday flew out. Later in that contest, with Ryan Dempster closing things out in what looked to be a blowout, Holliday hit a shot into the monster seats to give St. Louis their only run. The Cardinals left fielder hasn't been as red hot in the series as Carlos Beltran or Yadier Molina, but he has been at the center of their offense in almost every game, going 5-17 while scoring three runs and driving in four.

While Holliday is an excellent hitter overall, there is very little difference in his career platoon splits and he has actually been slightly better against righties. This season, that tendency was fairly pronounced; Holliday hit 24 percent better against righties than lefties and struck out against southpaws five percent more often. The main reason for his reverse-splits this year seems to be trouble against left-handed off-speed pitches, especially change-ups and cutters. Historically, he has handled these pitches very well, but this season he hit just .125 against the cutter (32 pitches) and .143 against the change (77 pitches). Those numbers don't really gives us a strong gauge of his actual abilities given the limited sample, but this recent trend is certainly not bad news for Jon Lester.

What can drive Shane Victorino to sit out a World Series game? 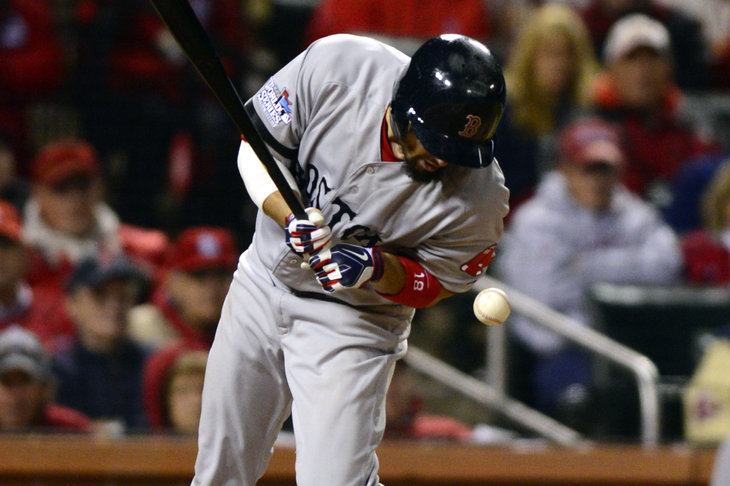 In what might be the biggest surprise of the postseason, Shane Victorino actually sat out a game due to injury. What made this the right time?

Lester uses his change and cutter extensively when facing right-handed hitters like Holliday and he has excellent results with both. His change gets whiffs on 34 percent of swings from righties and his cutter gets them on 18 percent of swings. He likes to take advantage of the hard downward action on his cutter to neutralize the platoon advantage by locating the pitch low and in where it is likely to either drop below a swing or at least be hit on the ground (he gets ground balls on the pitch 50 percent of the time). He locates his change away from righties at the bottom of the strike zone looking to get hitters to swing over the top of the pitch as it drops, so this offering also has the added benefit of getting a high number of ground balls (61 percent). He goes to the curve less often against righties, but as Holliday saw in his second World Series at-bat against Lester, that pitch can also be an effective weapon for the Red Sox ace. Lester typically goes to that pitch ahead in the count and he likes to drop it inside, where it looks crush-able until the bottom falls out.

In four games, the Red Sox have struggled to get Holliday out at key moments and he has delivered some of the biggest Cardinal hits as a result. Despite the platoon advantage, Lester is actually a very difficult pitcher for Holliday to match-up against, and that could be the deciding factor in this pivotal Game 5.