In what might be the biggest surprise of the postseason, Shane Victorino actually sat out a game due to injury. What made this the right time?

Share All sharing options for: World Series 2013: What can drive Shane Victorino to sit out a World Series game?

Shane Victorino sat out Game 4 of the World Series Sunday night. He did so after playing with a limp for what seems like the last four months, and after having completely given up left-handed hitting because his body simply wouldn't let him anymore. Through all this--at least up until the playoffs--he's managed to be one of Boston's most productive players at the plate and in the field.

So when he was scratched right before game time? Well...

For Shane to miss this game he must be nearly dead. Guy has played through everything all year.

Dead? No. Hurting? Yes. But there's more to the story, as it turns out. For that, I'll send you to the Providence Journal's Brian MacPherson:

"I thought I could go, but if in the third or fourth inning I'm locked up, then we lose me, we lose a bench guy, so we lose two guys," he said. "Me being a National League player, I understood that. Let's let Jonny go. Let me do my exercises seeing if I could get better, and if there's a pinch, maybe I can help."

MacPherson also relates some more specifics on the injury in question and what helped them make the final decision, but I'll focus in on that last bit.

I think, from a purely analytical perspective, there's probably a lot not to like with that idea. Shane Victorino is not exactly the guy you want pinch-hitting right now, and if he locks up, then he's not going to be much use as a defensive replacement. It's probably best to have him start the game, get as many ABs in against the righty starter as possible, and then have Gomes be the pinch-hitter. That also gets his glove into the outfield for as long as possible. 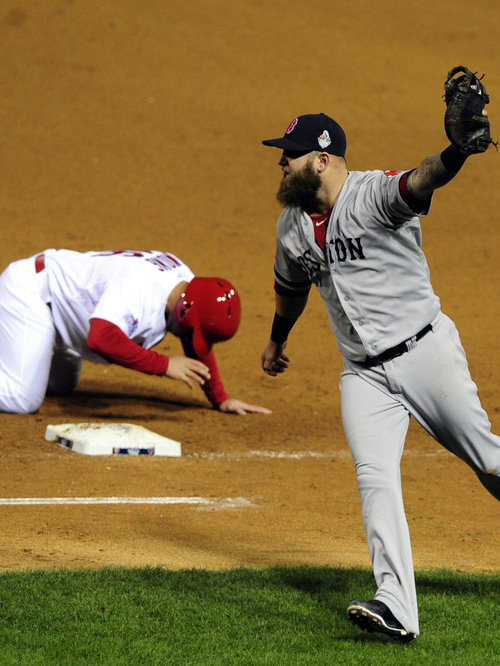 Summary or blurb about the related article

That being said, this is so in-character for Victorino that I can't help but love it. All year long if there's one guy that John Farrell has let do his own thing it's Shane Victorino. He's the one calling his own bunts on a team that almost never drops one down otherwise. He's the one still running around with his leg half off and throwing himself into walls with a side battered-and-bruised by already enduring one too many collisions.

So when he's not feeling at his best, he gives the nod to the next-man-up mentality that has been behind this team all year long. And the fact that Gomes came through so magnificently? Just another instance of the magic that's driven it to what is now a best-of-three World Series.