Injury has kept him from being Boston's ace in October, but he did his job in Game 4 of the Fall Classic.

With the three-run homer by Jonny Gomes, David Ortiz's continued brilliance (and dugout speech), and, of course, the first-ever pickoff to end a World Series game, Clay Buchholz's Game 4 start seems like a distant memory, despite occurring on the same evening. That's an unfair fate for his game, considering that, without a quality performance from the right-hander, none of the rest might have been possible. Buchholz wasn't at his best on Sunday, but what the diminished ace of the Red Sox had was enough for Boston to even the World Series at two games a piece, and that's what matters.

It's clear, and no secret, that Clay Buchholz is not 100 percent healthy. The Red Sox and Buchholz, prior to Game 4, were discussing that this was his last opportunity to put it all out there on the mound and help lead Boston to victory, and the fact he was pitching Game 4 instead of 3 all came down to giving him one more day of rest and preparation. Rather than start Felix Doubront or Ryan Dempster, both of whom have been in relief roles for the last month, the Sox wanted to get all they could out of Buchholz, and then patch the rest together. Buchholz might not have looked his sharpest, but the results after four innings could fool you into thinking otherwise, as he allowed just one run to the Cardinals before he was lifted for pinch-hitter Mike Carp with two runners on in the top of the fifth. 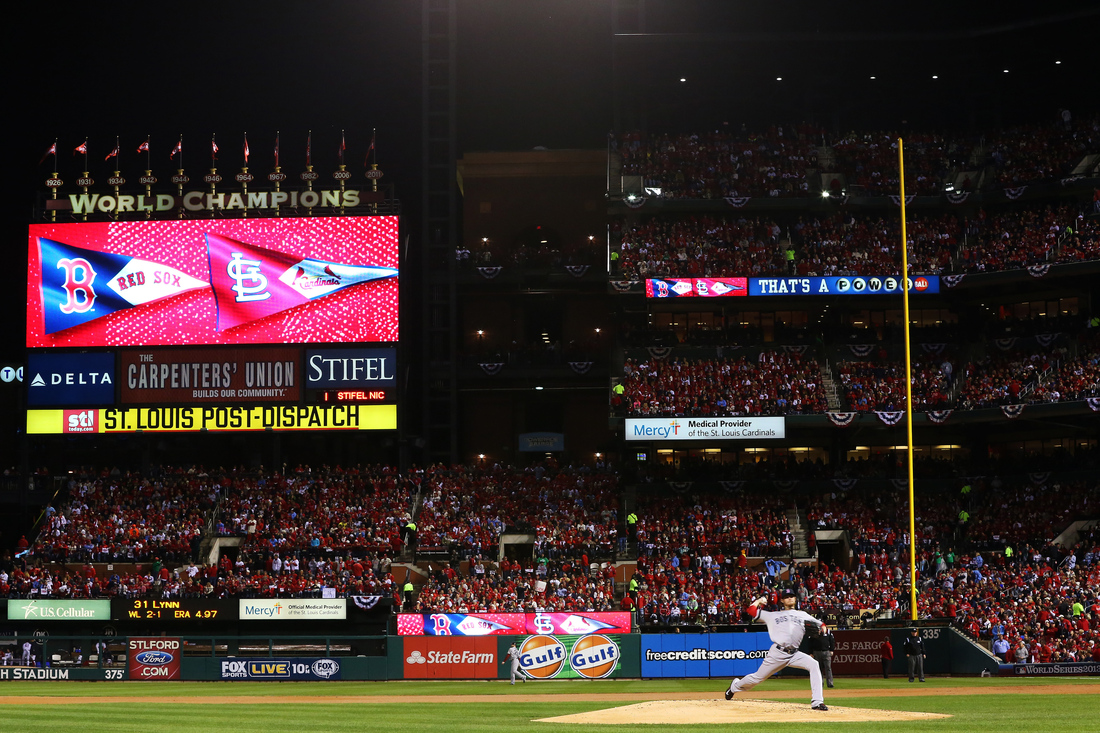 While Carp grounded out to end the threat, Buchholz still left with the game tied up at one after allowing six baserunners through four innings (three hits and walks a piece) while limiting the Cardinals' attack thanks to seven ground balls. There was speculation he could have come out for the fifth inning, but runs have been scarce at times against Cardinals' pitching, and Boston's bullpen had Doubront and Co. in it for a reason, too, so pinch-hitting for Buchholz made sense, especially since it was unclear just how long he could remain a viable, useful starter in his condition. He was good enough for long enough, and the game turned over to 2-2/3 innings of Doubront before the actual bullpen took over and shut the Cardinals down the rest of the way.

Buchholz might not have single-handedly defeated the Cardinals, but four one-run innings, piggybacked by Doubront's 2-2/3 one-run frames, all added up to a high-quality "start" by the time the duo was finished. As Doubront threw 25 pitches on Saturday night, and hasn't started a game since the regular season, he wasn't going to be able to do this on his own, either.

Clay Buchholz's efforts would likely be remembered and celebrated more had they come in relief, like Doubront's did, but they should be remembered fondly regardless. Boston was able to rebound from a tough Game 3 loss due in part to Buchholz's one-run outing, and he gutted through just enough of the game despite injury to keep Boston's bullpen as fresh as it can be for the third-straight night with a game scheduled. It's likely the last we'll see of Buchholz in 2013, but at least it helped the Sox tie things up once more, putting them in a position to wrest control of the series back from the Cardinals before heading home to Fenway. It's maybe not an obvious series-defining moment, but one day after a wretched loss, and one day before Jon Lester takes the mound for his final start of the season, it was huge nonetheless.