Dustin Pedroia, Jacoby Ellsbury, and Shane Victorino have all been named finalists for the 2013 Rawlings Gold Glove awards.

All three candidates have won the award before. Victorino leads the pack with three, having dominated the award in the NL from 2008 to 2010. Pedroia took it home in each of 2008 and 2011 (meaning he's been robbed about five times) and Jacoby Ellsbury has won just once back in 2011.

For Victorino to pick up his fourth, he will need to top Josh Reddick and Nick Markakis in the voting. Victorino has been making highlight-reel plays all year long, throwing his body all over the place in pursuit of fly balls in Fenway's massive right field. Statistically he grades in at a staggering 24 runs saved over the average right fielder by DRS, and 25 by UZR. Neither Reddick nor Markakis come close, with Markakis actually grading in noticeably in the negatives.

This, mind you, matters now that there's a statistical component being taken into account. A welcome change after years of Derek Jeter awards won for making easy plays look tough and, frankly, being able to hit.

The case for Jacoby Ellsbury is not quite so clear. While he turned in another strong season in center, the talk of bad routes and worse jumps seeming so far in the past, Lorenzo Cain has been an absolute monster for the Royals in both center and right. The third candidate, Adam Jones, marks the second Orioles player with negative statistics to make the cut to finalists. If Chris Davis is on the list for first over the surprisingly proficient Mike Napoli--

Red Sox lose, but can take control in St. Louis 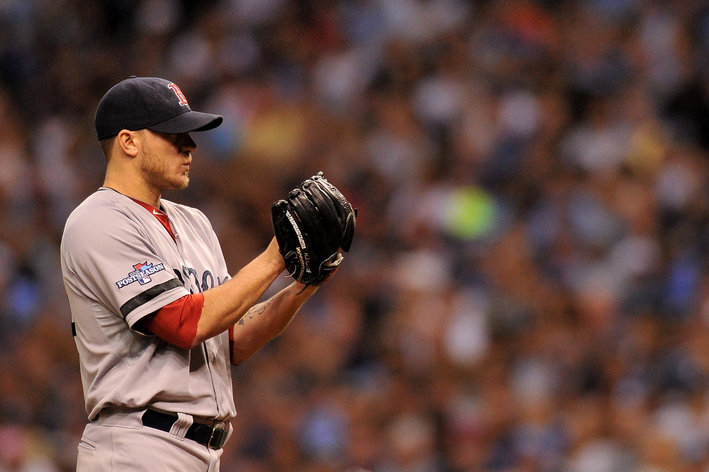 Being up 2-0 would have been preferable to 1-1, but the Sox will have their opportunity to strike this weekend.

Yep, it's a conspiracy.

Moving on, though, to Dustin Pedroia at second base, where the Orioles thankfully didn't have anyone so much as eligible. He once again nearly laps the pack consisting of Ben Zobrist and Robinson Cano, but at least this time all three candidates are at least positive defenders--something that could not have been said about Cano in years past. Still, it's hard to put anyone up against Pedey when it comes to the glove.

Shane Victorino and Dustin Pedroia, at least, really should win. And Mike Napoli can have some serious gripes with not having been so much as considered. But these are the Golden Gloves, where sense often gets left well behind. We'll have to wait until the awards are announced to even be so much as confident in any of them.