Cardinals Game 2 starter Michael Wacha has been surprisingly vulnerable to power-hitting righties in his short career and his success or failure against the Red Sox biggest righty power threat could be the difference for him.

In Game 1 of the 2013 World Series, the Red Sox bats did a number on Cardinals ace Adam Wainwright, with a big assist from some poor defense from Pete Kozma and the rest of the infield. Once again, the big hits for the Red Sox came from the middle of the line-up, with David Ortiz and Mike Napoli both driving in three runs. Game 2 pits Sox righty John Lackey, who was dominant against the Tigers in his one ALCS start, against rookie Michael Wacha, who was even better in two NLCS starts, holding the Dodgers scoreless over 13 2/3 innings, both times against likely Cy Young winner Clayton Kershaw. The right-handed Wacha has every reason to fear the unstoppable force that is Big Papi, so the battle between and the flame-throwing rookie could play a central role in Game 2.

Wacha has averaged just over 94 mph on his fastball in his 64 2/3 major-league innings showing the ability to touch 96-97 mph with some regularity. He primarily relies on just two pitches, using his heater 65 percent of the time, then going to his change 27 percent. He also has a curve ball and a cutter he can mix in, but he uses both pitches sparingly. While he doesn’t offer hitters a wide array of pitches to deal with, he hardly needs to. His change comes in at around 86 mph, giving it huge separation from his fastball, and he can locate both pitches very well to move hitters focus around the zone and wreak havoc with their timing. Since being called up at the end of May, Wacha has used that strategy to strikeout a batter an inning and post a 2.78 ERA and a 2.92 FIP.

One surprising thing about Wacha’s small body of work at the major-league level is his splits. He has gotten significantly better results against lefties in this early sample with a .227 wOBA against them compared to a .308 wOBA versus right-handed hitters in a very similar number of plate appearances against both. That isn’t what you would expect from a pitcher who has that kind of velocity and a killer change to go with it and there are reasons to believe this is simply a product of the small sample size. Wacha has struck out righties considerably more often while walking them just a little more often. His reverse-split comes entirely from the highly variable results of balls in play and home runs. Wacha has allowed RHH to average .305 on balls in play this season and lefties just .255. Of his five home runs in the regular season, four came off the bats of righties. These are the numbers that are least reliable in a small sample and it is very unlikely that this effect will hold out when Wacha has 200 innings or more under his belt, but the degree of difference makes this worth watching. 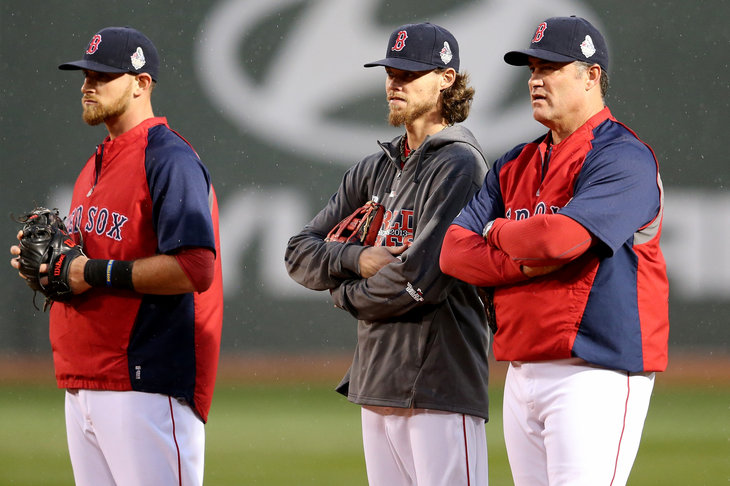 The Red Sox will have two power-hitting righties in the line up who struggle against change-ups and who are extremely prone to striking out against righties. One is John Farrell’s logical blind spot, Jonny Gomes, and the other is Mike Napoli. Farrell could avoid the issue with Gomes, but sitting Mike Napoli is not a reasonable option in an AL park where the DH is in play.

has whiffed on change-ups 46 percent of the time he has swung at them over his career, more than on any other pitch. He also managed to hit fewer home runs on change-ups per fly ball and line drives than on any pitch except the much rarer split-finger. This makes him particularly susceptible to Wacha’s go-to secondary pitch. Of course, the pitch that Wacha depends on the most, the fastball, is Mike Napoli’s bread and butter. He misses plenty, but he hits a large number of them for line drives and he puts more heaters in the seats than any other pitch, percentage-wise. If there is any element of truth in Wacha's early numbers, Napoli presents a problem for him. He is too likely to strikeout for Wacha to pitch him carefully, but he is too dangerous to make a mistake against -- you will recall Justin Verlander faced a  somewhat similar challenge with Napoli in the ALCS.

Between Wacha’s unexpected early splits and his arsenal of pitches, every at-bat that comes against the heavy-slugging duo of Gomes and offers extremes of risk and reward. Wacha can completely dominate them if he locates well and keeps them of balance, but there is no room for a mistake on the fastball. got beat badly by David Ortiz on Wednesday and I can’t imagine them giving him many chances to hurt them in Game 2. If they pitch around Papi, Mike Napoli will get every opportunity to be the hero again.