The Red Sox emerged victorious in Game 1 of the 2013 World Series thanks to...

The Red Sox have taken a 1-0 lead over the St. Louis Cardinals in the 2013 World Series, and I don't think there's really much question who's most deserving of MVP honors for Game 1. But let's put it up to vote just-the-same.

It's amusing how much stronger Ortiz' case would be if you just flipped the defensive efforts in his first and second at bats. Imagine for a moment that Kozma turns the inning-ending double play rather than letting the bases be loaded. Imagine it's just 1-0 when Ortiz comes to bat again with the bases loaded. And imagine that his blast to right is not hauled in by Carlos Beltran, but instead falls into the bullpen for a grand slam. 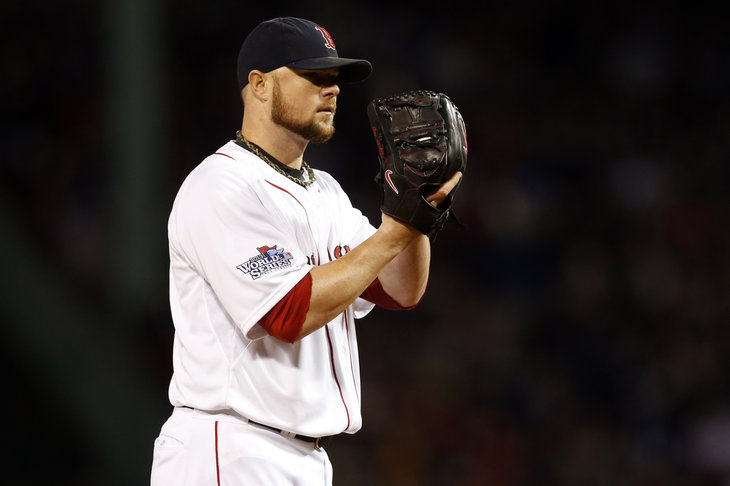 Suddenly we're talking about a guy who took a 1-0 game and blew it wide open, then added two more runs later on a second homer.

That didn't happen, though. Instead, Ortiz lucked out in the first, paid for it in the second, then got his homer all-the-same in the seventh. His was still the most productive bat of the night, but oh the story could be so much more dramatic with just the smallest of tweaks...

While Pete Kozma's error set the Red Sox up, it was Napoli who still had to come through with the big hit in the first. His three-run double counts for as many runs as David Ortiz' homer and almost-homer combined, and he's the one who actually assured Red Sox fans that everything was gonna be alright.

Alright, now that we're done with the formalities of having competition, here's your man. 7.2 innings, five hits, one walk, eight strikeouts, zero runs. He personally ended his most dangerous inning--largely caused by a pair of ground balls getting through for hits--by snagging a comebacker and calmly starting the 1-2-3 double play. He ended the night with 76 strikes on 112 pitches, and could have finished the eighth if John Farrell didn't want to make sure he got his well-deserved standing ovation. This was 2007 Josh Beckett saying in no uncertain terms that Game 1 was going Boston's way. Just, y'know, without quite so many personality hang-ups.