World Series 2013: Jonny Gomes or Daniel Nava, the remains of a platoon examined

During the ALCS, Red Sox manager John Farrell ditched the productive left field platoon he used all season and handed the job to Jonny Gomes in four games despite facing nothing but righty starters. With Boston meeting the Cardinals and their all-righty rotation in the World Series, will this trend continue?

Share All sharing options for: World Series 2013: Jonny Gomes or Daniel Nava, the remains of a platoon examined

During the 2013 season, when the team was at full strength, Daniel Nava and Jonny Gomes formed a straight platoon in left field, with Nava starting against right-handed pitchers and Gomes getting the call against southpaws. The plan worked perfectly. The Red Sox got some of the best production in the game out of the position, with Sox left fielders posting a .278/.362/.450 line for a wRC+ of 121. Thanks to this, it was fairly shocking to see manager John Farrell almost completely abandon this strategy over the course of an extremely challenging series against the Tigers in the ALCS.

Rob Neyer lamented this change in tactics over at Baseball Nation just before Game 4 of that series, saying, "at the most important time of the whole year, Farrell's tossed that nifty platoon into the wastebin." At that time, Gomes had started two of the three games, going 2-7 thanks to two seeing-eye grounder and also striking out five times. Nava started Game 4, but Farrell went back to Gomes for the final two games.

With the Red Sox advancing to the World Series to face a Cardinals rotation that is exclusively right-handed, the platoon issue will almost certainly be a point of contention again. It is unclear whether or not Farrell will continue to start Gomes, but given what we saw in the ALCS it seems fairly likely, so the decision to abandon this highly successful strategy deserves a closer look.

The two player's overall numbers certainly don't support Farrell's decision. Gomes went 3-16 in the series with seven strikeouts and just the one extra base hit -- basically the kind of poor results you expect when you put the right-handed side of your platoon in against tough right-handed starters like Scherzer and Verlander. Nava went 2-6 with a walk and two strikeouts in the series, facing exclusively righties just as he did for the entire season.

Those numbers lack some context, however. Gomes' third hit of the series, a double off the Green Monster in the eighth inning of Game 6, was just a foot or so short of a home run and it came with the Red Sox trailing 2-1. In many other parks, that hit would have tied the game. Gomes also reached on an error and came around to score in the Red Sox three-run second inning in Game 5. Those runs were important to the Red Sox and that has helped shield Farrell for further criticism but they don't validate the decision. Mitchel Lichtman of The Book and Baseball solutions fame (aka mgl) sums up the problem with such retrospective justifications perfectly in the comments to Neyer's piece.

This whole idea of judging a decision based on the outcome of the play or of the game is beyond silly. Let's say that playing one player over another adds 2% to a team's win expectancy (WE). We'll call that the "right" play and using the other player as the "wrong" play. And let's say that we don't know which player is the "right" one. Let's also say that with the right player, we win 51% of the time and with the wrong player we win 49%.

How helpful is the outcome of the game in determining whether we made the right or wrong decision?

Rather than judge Farrell's choice by the results, let's look at the process to better understand the thinking behind it. That is far more likely to be useful in understand what happens in the upcoming World Series than the random events of just six games.

Following Game 3, where Gomes registered the first hit of the game against Justin Verlander and made a highlight-reel catch, Brian MacPherson of the Providence Journal spoke with Farrell about the move. Farrell offered three basic rationales for playing Gomes over Nava.

Success against the RHP sliders

MacPherson quotes Farrell saying "Given what we anticipate what Verlander is going to throw, I like this matchup." MacPherson contextualize that comment by pointing out that Gomes slugged .393 on sliders.

On the surface this seems like a reasonable justification and even shows some sophistication in setting the lineup beyond simple platooning. However, it is a problematic way of thinking about the numbers. If Gomes had a true talent for punishing sliders from right-handers, one of two things would be true; either his overall numbers against righties would be strong (which of course, they aren't) or pitchers would recognize that strength and stop throwing him sliders. Gomes only saw 176 plate appearances against righties in 2013 and it's likely that many of them do not even throw sliders. Even pitchers who feature the slider heavily only use it around 35 percent of the time, limiting the possible sample size to the point that this data like this is far more likely to be noise than sign of some a true talent.

Farrell also told MacPherson that Verlander may have struggled some with fastballs "that have leaked back to the middle of the plate, that haven't stayed true to his glove side away from right-handers." To that point, MacPherson adds that Gomes hit three home runs against fastballs from righties this season.

While the three-home run bit really carries an even bigger small sample caveat than the slider issue as a sub-dividion of the sample of Gomes' 13 home runs by both handedness and pitch type, this statement is probably the most telling. Farrell appears to have perceived Verlander as prone to making mistakes with his fastball and he wanted to have the player most capable of punishing those mistakes in his lineup -- for what it's worth, Gomes had another near-miss home run in the series, against Verlander, that went just foul. Platoon splits and all, there no situation where Nava is as likely to hit a home run as Gomes. Gomes has taken righties deep once every 24 plate appearances. Nava may have a career slugging percentage against RHP that is 20 points higher than Gomes, but he has only gone yard against them once every 46 plate appearances.

Sitting outside the organization and analyzing the game from afar, this seems to be a poor reason to play a hitter who is has an OBP 60 points lower than another, but that doesn't mean it is. Farrell has gotten tons of praise from players and beat reporters for his transformation of the clubhouse after the Bobby Valentine disaster last season and nothing that he has done in that respect can be accurately measured or analyzed by fans or writers. Gomes has been cited for his important role in the change as well and it very possible that players want him on the field or Farrell feels it necessary to reward him with added playing time on the game's biggest stages. There is a sacrifice in offensive production that comes with such a choice, but just because Farrell and the Red Sox are willing to take that hit, doesn't mean they don't correctly perceive it.

So what is that downgrade in production exactly? By weighted Runs Created, Daniel Nava produced .17 runs per plate appearance when facing RHP and Gomes produced .12. The two combined for 23 plate appearances in the ALCS. The difference (.05) played out over that number of plate appearances would be 1.15 runs, but that figure would assume that Gomes hit against righties every time up, something that is unlikely to happen since Nava would still pinch-hit in the late innings. There is a difference on defense as well, though it is even smaller. Both players are relatively poor defenders and while Nava adds some measurable value over Gomes over 162 games, in six or seven games, it is basically a draw. 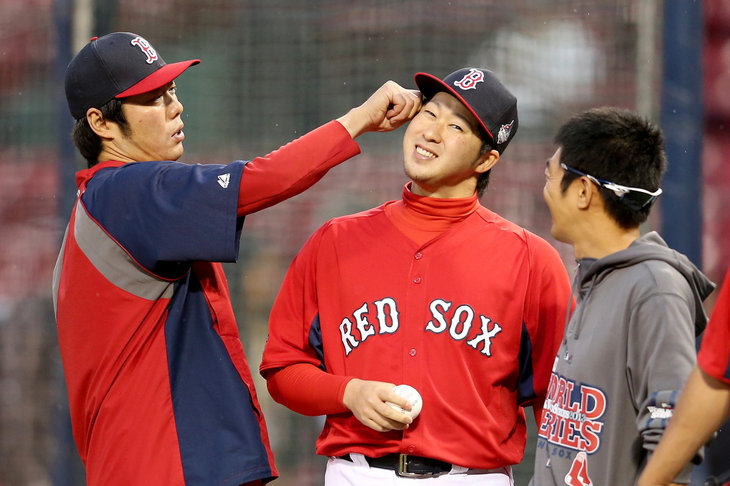 The effect on the offense is not insignificant, however, especially considering the Red Sox out scored Detroit just 19-18 over that six-game series and earned three of their four wins by a single run. However, it is also less than the weighted value of a single home run. That is an important detail, because as we saw above, Gomes is almost twice as likely to hit a home run as Nava. In the number of plate appearances Gomes is likely to see in a short series as the full-time starter, he has good chance of going deep, whereas Nava is unlikely to. A single added home run would be enough to overcome the sacrifice of not sticking with the platoon plan that worked so well all season long.

This is where the postseason can become a trap for even a smart manager like Farrell. There is a non-negligible advantage playing Nava. That is undeniable. However, Nava's skill set makes his contributions easy to overlook. Sticking with the plan is unlikely to result in any event that will be an obvious and easily identifiable turning point in a single game. Sure, Nava may draw a walk or get a few extra hits. He will almost certainly see a few extra pitches and help wear down the opponent. He could hit some dramatic, game-winning blast, but the odds are against it. Jonny Gomes is more likely to be featured on a highlight reel the next day, and even if his heroics come after two strikeouts, Farrell will have something obvious to point to show his managerial prowess. It is a gamble, but it one that can pay a much higher dividend than the straight percentage play.

Given just how small the difference between Gomes and Nava really is, it is hard to blame Farrell for going with the move that offers him the best chance of looking like a genius. As the Red Sox move on to the World Series and the Cardinals all righty-rotation, I expect Farrell will stick with Gomes despite the cost to the offense, at least until he struggles in a more obvious way. Only two of the four Cardinals starters who pitched in the NLCS throw sliders, so if that motivation truly compelled the change, we should know soon. Game 1 starter Adam Wainwright doesn't use the pitch at all, and unlike Verlander, his fastball was among the most valuable in the game in 2013 (by Fangraphs pitch values).

In the spotlight of the postseason, it is easy to get caught up on the few minor points of strategy that we have to obsess over. Starting Daniel Nava might be the right call on Wednesday night, but it is important remember just how small the difference really is, and how quickly one big Jonny Gomes swing can render the point moot.