With Jose Dariel Abreu gone to Chicago, will the Red Sox stick with Mike Napoli?

Jose Dariel Abreu is not walking through that door. Does that leave a Mike Napoli return the obvious choice for Boston?

Share All sharing options for: With Jose Dariel Abreu gone to Chicago, will the Red Sox stick with Mike Napoli?

With Boston's attention focused almost entirely on the tense ALCS against the Detroit Tigers, the acquisition of Jose Dariel Abreu--seemingly one of the team's biggest targets for the coming offseason--by the Chicago White Sox went more or less unnoticed.

It's an odd thing to have happen, made possible only by Boston's return to the playoffs and Abreu's atypical position as an MLB-ready international free agent. Usually, when the Red Sox miss out on a big free agent signing, there's a lot more consternation. But it's hard to be upset when your team is playing for a ticket to the World Series, particularly when they subsequently punch said ticket in dramatic fashion.

Still, for those of us who saw Abreu as an ideal solution to Boston's dearth of long-term answers at first base (by far the weakest position in the farm system), it's hard not to be disappointed by his escape. The well-hyped international player attracts in much the same way a high-ceiling prospect does. They're not a guarantee, and not necessarily even the right risk, but there are few things more exciting than a player with serious tools whose lack of MLB numbers allow for ample dreaming. At least for the six months between the end of the playoffs and the beginning of the regular season.

For all that, though, this could have gone so much worse. The biggest news for the Red Sox now is not that Abreu is gone, but that Abreu is gone early enough for them to react. If this had happened two months later, with free agency well underway, who knows where the Red Sox would be, particularly with free-agent-to-be Mike Napoli.

With Abreu as an option, the Red Sox were left in a difficult position when it came to Napoli. The $15 million first baseman has certainly been a valuable contributor to the 2013 team, producing a 129 wRC+ in 578 plate appearances while playing a surprisingly good first base. All told, he was worth nearly four WAR, making him a fine deal, particularly on a one-year contract. But it's a difficult proposition to include two $15 million first basemen on a roster already using a space and $13 million on a DH in David Ortiz. For all that the Red Sox might have talked about keeping Napoli on even with Abreu in the fold, chances are Abreu in Boston means Napoli elsewhere.

And chances are it also means Napoli elsewhere without any compensation coming back. Despite the serious concerns about his hip entering the season, Napoli has played in 139 games for the Red Sox this year, with some of those absences being explained away as David Ortiz' National League games. But the hip condition remains, and its specter should have the same effect in the coming offseason as it did last year, pushing teams away from long-term deals.

Who benefits from that more than anyone? The Red Sox, because they've got the benefit of the qualifying offer. Any number of teams might be willing to give Napoli a very reasonable salary, so long as it's on a short-term basis. But what they're not likely willing to give up to sign him to that contract is a first round draft pick. We saw how reluctant teams were to trade a pick for three years of Kyle Lohse. Giving up said pick for either a one-year deal or a three-year deal they would likely want to avoid even without compensation attached? Seems like a long shot. 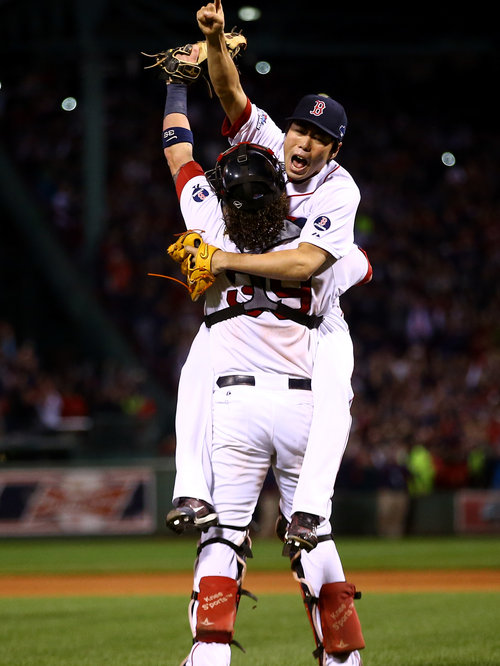 If Abreu was available, then, the Sox would likely have to pass on offering Napoli a qualifying offer, because if they do it's almost inevitable he finds his way back to Boston, and keeping both men on the payroll would require concessions elsewhere. And if they miss out on Abreu in December? Then they're forced to enter a far more open Mike Napoli market--assuming he's even still there--or test the waters of an uninspiring free agent market headlined by the likes of Kendrys Morales and Justin Morneau. There but for the grace of God go we.

There are no guarantees in free agency. We've seen some seriously crazy moves happen over the years, so it's not like the Red Sox can simply pencil in Mike Napoli at first base and that's that. But the alternatives being what they are, with Jose Dariel Abreu gone to Chicago, it's not really even a question. Barring a surprise trade, Mike Napoli is the obvious answer for the Red Sox at first base. He's not an option they can depend on for years to come--eventually either the hip or age will catch up to him, leaving him with only the strikeouts. And it may very well be that 2014 is that year. But for the Red Sox, the devil they know on a one-year deal is far better than the devil they don't for three or more.