These two franchises will meet for the fourth time in yet another impressive match-up of talent.

Historically, the Red Sox and Cardinals are familiar adversaries. The 2013 World Series marks the fourth in which the two clubs have faced off against each other, and between the two, they have 18 World Series championships -- the Cardinals rank second all-time with 11, while the Sox are tied for fourth with seven, despite failing to win one after 1918 until 2004, a stretch that included two defeats at the hands of St. Louis.

The Red Sox have an opportunity to knot up the all-time record between the two in the 2013 iteration of the World Series: Boston first triumphed over the Cardinals in 2004, in the second year of Theo Epstein's time as general manager. Now, Ben Cherington, in his own second season in charge of the Sox, gets his own crack at St. Louis.

Parallels do run a bit deeper than that, though -- one of the most famous Sox clubs in history is the 1967 "Impossible Dream" team that went from worst to first, and faced the Cardinals in the Fall Classic. Sounds familiar, yeah? Hopefully not too much so, as a different ending would go a long way towards making the 2013 club the preferred historical "Impossible Dream" in Boston's long and storied history. After all, the Sox are only a year removed from He Who Shall Not Be Named at the helm -- the fact they've recovered this quickly is a testament to the ability of everyone who remains. 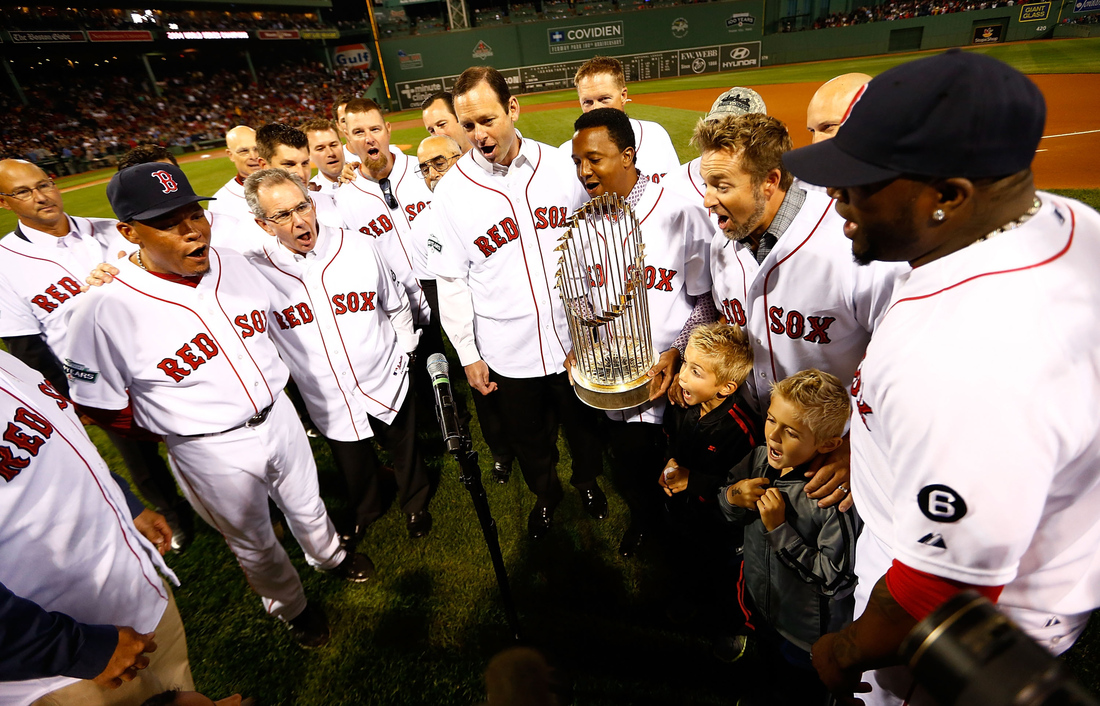 With the World Series beginning on Wednesday at Fenway Park, today we'll take a look at the October history of these two clubs, one littered with Hall of Famers, historically-relevant names, soon-to-blossom young players, and plenty of baseball's better second-tier talents -- all traditions that extend to this upcoming match-up.

Explaining just who the major players in this World Series were seems unnecessary, as they're in that territory where names suffice. A 27-year-old Ted Williams led the Sox to October on the strength of a .342/.497/.667 campaign, his first after missing three years to World War II -- he led the American League in runs, walks, on-base percentage, slugging, OPS, OPS, and total bases. He struck out 44 times, or once for every 7.5 times on base, and only six more times than he hit a home run. Williams would pick up the first of his two Most Valuable Player awards in that campaign, but shared votes with teammate (and fellow future Hall of Famer) Bobby Doerr, as well as shortstop Johnny Pesky, who had similarly missed the last three years to the service, but posted a 125 OPS+ as a shortstop, finishing second among Sox regulars. Dom DiMaggio, brother of Joltin' Joe, had a similarly productive campaign, hitting .316/.393/.427 at his own up-the-middle position in center. 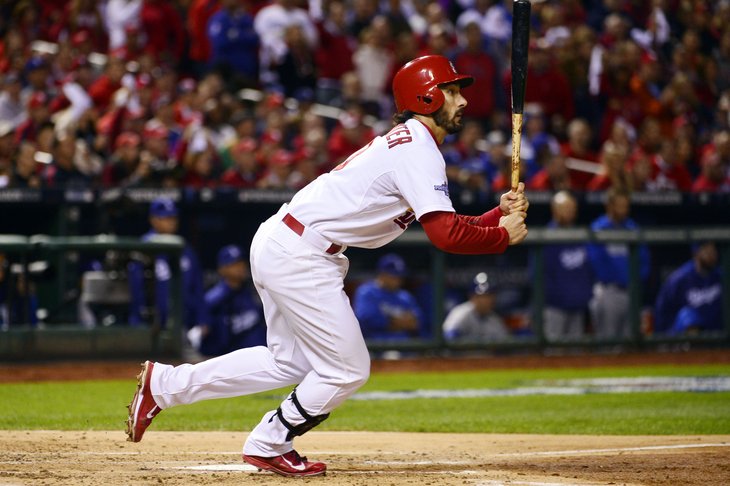 The Red Sox pitching staff was led by Tex Hughson, who started 35 games, threw 21 complete games, and posted a 133 ERA+. His career would be short thanks to arm troubles, but when he was on the mound -- as he most certainly was in '46 -- he was golden, posting a career 125 ERA+ with 99 complete games in 156 starts.

The Cardinals had their own stable of talent -- one that would lead to a series' win in seven games. Three Hall of Famers, led by Stan Musial and his league-leading average, were in their ranks -- Musial was a lot more than just an average hitter, though, putting up .365/.434/.587 line with an NL-leading OPS+ and slugging, also winning the MVP just like his counterpart Williams. Red Schoendienst had not entered the part of his career where he was productive at the plate just yet, and he looks like a questionable Veteran's Committee add to Cooperstown given what he accomplished there when all was said and done. However, he could absolutely field the keystone, and also had a career as a manager and coach -- as a cumulative career add, Schoendienst made a lot of sense.

There was also Enos Slaughter, who, like Pesky, will forever have his named attached to this series thanks to That Play. Like in 1986 with Bill Buckner, though, it wasn't any one moment that caused the Red Sox to lose the series -- it was just easier to distill things down to seemingly definable moments so we had something to grouse about while new championships eluded us.

You already know this as the "Impossible Dream" worst to first squad of old. Carl Yastrzemski won the Triple Crown this year, the last until Miguel Cabrera finally managed the feat in 2012. Yaz would win his one and only MVP that season, and while it was easily his finest campaign, he also played 23 years and dominated for a nearly 10-year stretch. Yaz was joined by George "Boomer" Scott, Sox favorite Rico Petrocelli, and rookie center fielder Reggie Smith. Yastrzemski stood head and shoulders above the rest, though, a task sadly made easier for him by the shortened season of Tony Conigliaro, as the 22-year-old was hit in the head by a pitch after 95 stellar games that saw him hit .287/.341/.519 at a time when offense was down. 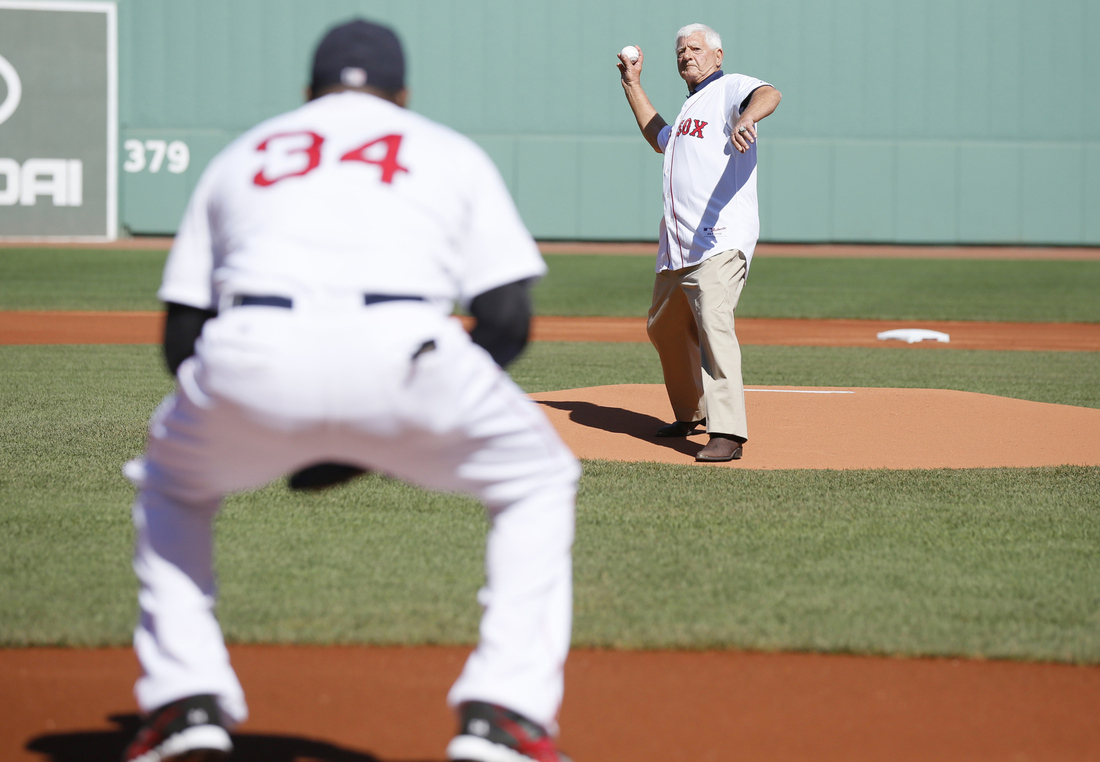 Jim Lonborg had a strong season, but pitching was not what brought the Sox here: it was all that lineup, and, like in '46, it wasn't enough. This time around, it was Hall of Fame and face of this particular era of pitching dominance, Bob Gibson, that the Sox had to contend with. Gibson started three games, with the Cardinals winning all three, with Gibson throwing 27 innings while allowing just three runs -- yes, he threw three complete games in one playoff series.

Gibson had plenty of help, though: this was the Cardinals' squad with Tim McCarver -- it's forgotten now, but he was a fine ballplayer in his day, and he finished second in the MVP balloting this year -- Orlando Cepeda, Lou Brock, Curt Flood, and Roger Maris. Steve Carlton matched Gibson in ERA+, and 29-year-old Dick Hughes bested both of them in his team-leading 222 innings.

The '67 series might seem like it tipped the scales in terms of talent involved, but man, these 2004 squads are ridiculous in retrospect. The Red Sox came to battle with Manny Ramirez and David Ortiz back-to-back in the lineup. Jason Varitek would go on to finish up a fine career as one of the better backstops of his era, and he might never have been better than in 2004. Johnny Damon is no Hall of Famer, but he would play another eight years after this season with plenty of quality seasons and October appearances on his resume. 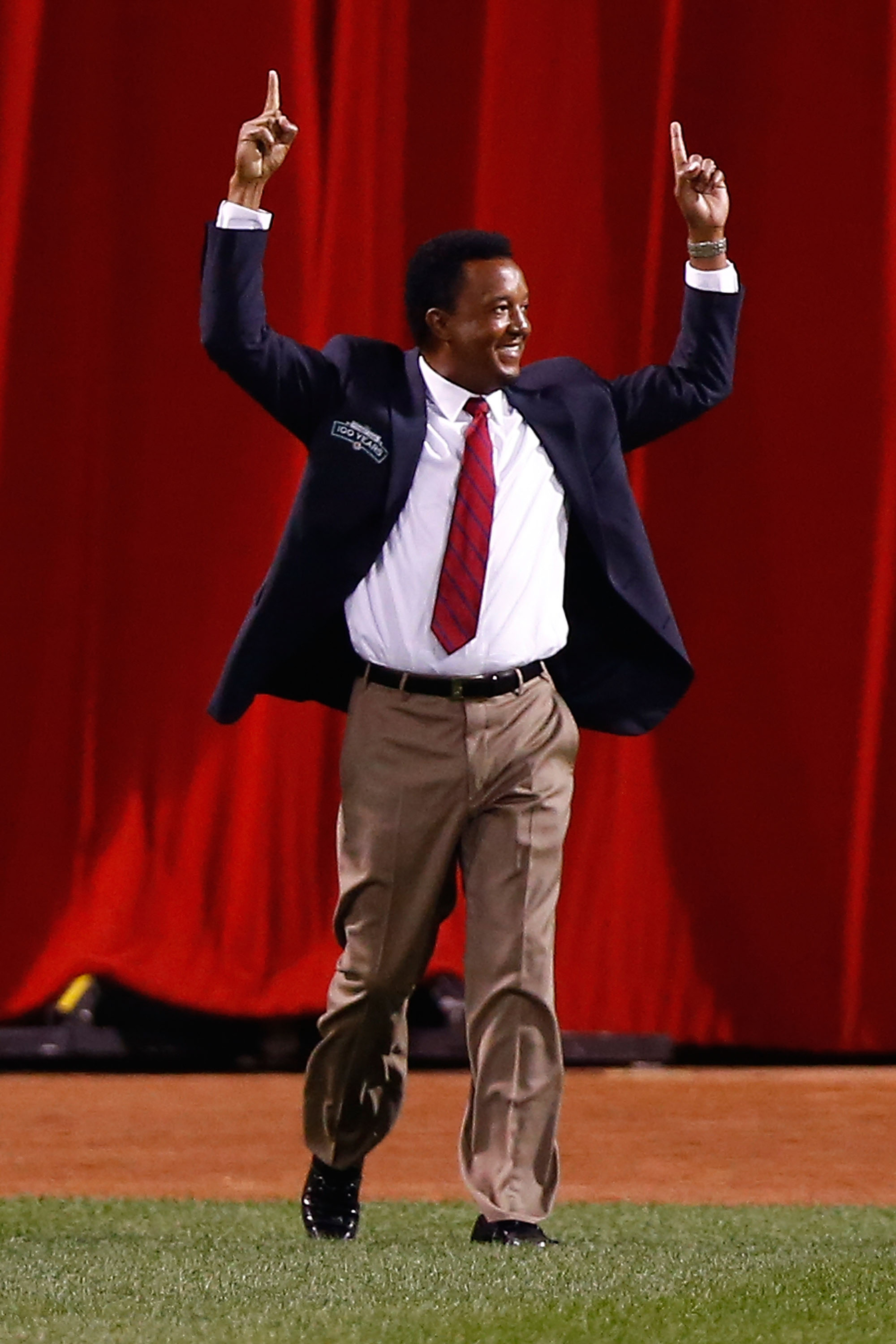 On the mound, the Red Sox had Curt Schilling, Bronson Arroyo -- an afterthought in this rotation, but now the owner of nearly 2,300 above-average major-league innings -- and Tim Wakefield, as well as he who needs no introduction, Pedro Martinez.

The Cardinals had a similar glut of wow lined up, with Chris Carpenter in the rotation, and Dan Haren in the bullpen before he ever became Dan Haren. The lineup was fearsome, with Albert Pujols, Jim Edmonds, Larry Walker, Scott Rolen, and the still-useful Ray Lankford. Yadier Molina, a viable NL MVP candidate in a healthy year, was the backup catcher at this time, and Mike Matheny, while not much of a hitter, was an excellent defensive catcher and is now the manager of the 2013 Cardinals. Yes, the starting catcher of Game 1 of the 2004 World Series is writing the lineup for Game 1 of the latest Fall Classic.

Unlike '46 and '67, this one ended positively for Red Sox fans. But you knew that.

We don't know how this one will go, but like the rest, it's loaded with some of the game's top players and future stars. David Ortiz is once again involved, but with the likes of Dustin Pedroia, Jon Lester, Clay Buchholz, Jacoby Ellsbury, and Shane Victorino to assist. The future is well-represented by top prospect Xander Bogaerts, who hit his way into starting at third base in the ALCS. The Cardinals have their own kids in Michael Wacha, Shelby Miller, Trevor Rosenthal, and so on, but also plenty of productive, best-in-their-class veterans with Adam Wainwright, a now entrenched Molina, Matt Holliday, and Carlos Beltran in what is his first-ever World Series near the end of a Hall of Famer career. They, like the Red Sox, also have many of the pieces of what should be the "next" great Cardinals team in place, thanks to the relative youth of Allen Craig, Matt Carpenter, Matt Adams, and the like.

It's hard to believe the Red Sox will repeat 2004 and sweep the Cardinals -- something like '46 or '67, hard-fought and lengthy series, almost seems inevitable with the sheer volume of talent on both sides. Maybe, though, this time the Red Sox can change the ending of that version of events.