With a Red Sox-Cardinals matchup in the World Series this year, we are taking a trip back to 2004, when these teams met in the final series of the season again. It was a simpler time, when the Expos were still a thing, the world hadn't been subjected to Adam Sandler's Jack and Jill, Justin Bieber was just a 10-year old doing whatever 10-year old Canadians do, and these were only seen in disturbed children's nightmares. Now, the only players who remain from that season on their respective teams are David Ortiz and Yadier Molina.

Read More: The Red Sox are going to the World Series!

Since the Cardinals play in the National League, some of their players may be somewhat unknown to Red Sox fans. They do have the stars like Molina, Matt Holliday, Adam Wainwright and Carlos Beltran that baseball fans are very familiar with. However, much like the Red Sox, it is their depth that has gotten them four victories from the ultimate goal. Here are five players to watch for in the upcoming series.

Carpenter just barely qualifies for this list, as he was an All Star this season. He wasn't exactly a lock to get there before the season, though, and I do think what he did this year may be slightly underrated by some. As the team's second baseman, he turned in a phenomenal season at the plate. With a batting line of .318/.392/.481 in 717, his 147 wRC+ was the best amongst all qualified second basemen - five points above Robinson Cano's - and was eighth best amongst all National League hitters this year. That kind of production out of a middle infielder is unheard of, though he doesn't do it in the sexiest way possible. He only hit eleven home runs this season, a modest amount for a hitter of his caliber. However, he did hit 55 doubles and seven triples, giving him a very respectable .163 isolated power. Carpenter also shows a great approach at the plate, drawing walks in ten percent of his trips to the dish. While the average MLB hitter swings at just over 31 percent of the pitches out of the zone, he swings at just 21 percent. Finally, the Red Sox won't be able to take advantage of any platoon splits, as the left-handed batter still put up a 130 wRC+ against southpaws. Boston pitchers are going to have their hands full trying to deal with his at bats, and they'll come often as he leads off their lineup.

Here in Boston, Xander Bogaerts is the rookie who is stealing all of our hearts. Out there in St. Louis, that distinction belongs to Mr. Wacha. The big 21-year-old right hander was just drafted in the 2012 draft, with the 19th overall pick in the draft. He skyrocketed through the minors, making his major-league debut at the end of May, and earning a permanent role on the team in August. He ended up appearing in 15 regular season games - including nine starts - and threw 64-2/3 innings in that time. All he did with that chance was earn himself a 2.78 ERA (131 ERA+) with a 65/19 K/BB ratio and a 2.92 FIP. That alone would have been impressive, but then the rookie took it to a whole nother level in the postseason. Wacha has given up one (1!!) run in 21 innings in these playoffs, and it came in their NLDS game against Pittsburgh. In two starts against the Dodgers in the NLCS, he pitched 13-2/3 shutout innings, allowing just seven hits, and three walks (one of which was intentional) while striking out 13. Despite his young age and lack of experience, Wacha has given MLB hitters fits all year. It will be another tough challenge for this Red Sox lineup. 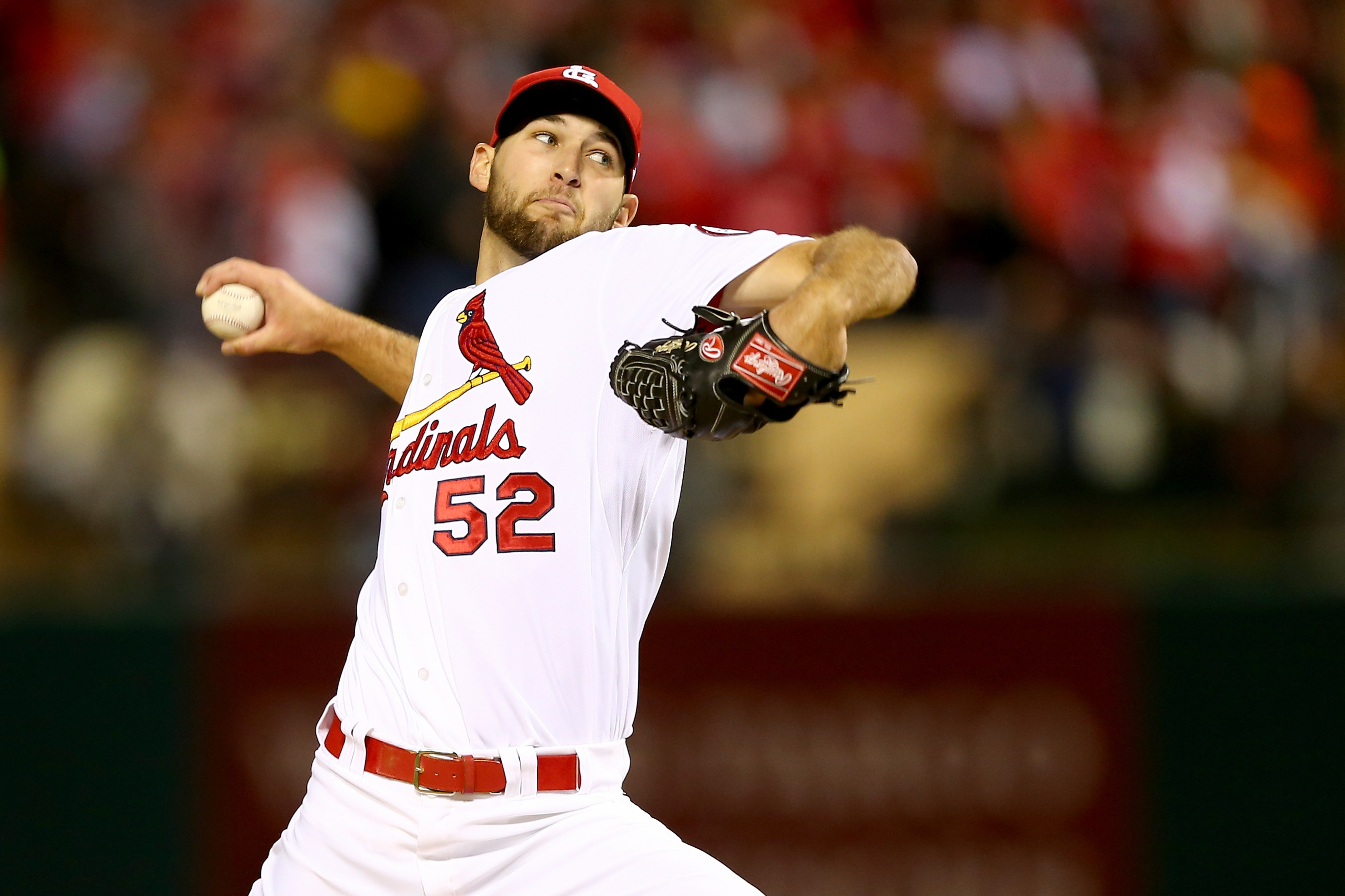 Two years ago, the Cardinals allowed the best player in baseball at the time, Albert Pujols, to walk away and take his mammoth contract from the Angels. For most organizations, this would be a major blow that would take some time to recover from. However, St. Louis isn't home to your typical organization, and they may be the best in the entire league. Allen Craig is a great example of this, as he stepped right into Pujols' shoes and took over first base, as the team didn't skip a beat. Now, Craig hasn't been able to participate in the postseason at all to this point, as he's been sidelined since early-September with a foot injury. Over the weekend, though, he took some batting practice and it's looking likely that he'll be able to participate in this series. Most likely, he'll be serving as the DH for the games at Fenway. That's a big boost for this Cardinals lineup, though, since he's hit .306/.358/.492 (135 wRC+) in 1420 career plate appearances. The key to his performance is hard contact, as line drives have come off his bat in over 22 percent of batted balls in his career, and that rate was all the way up at 27 percent this season. As a right-handed hitter, Craig could do some serious damage using the Green Monster to his advantage in this series. 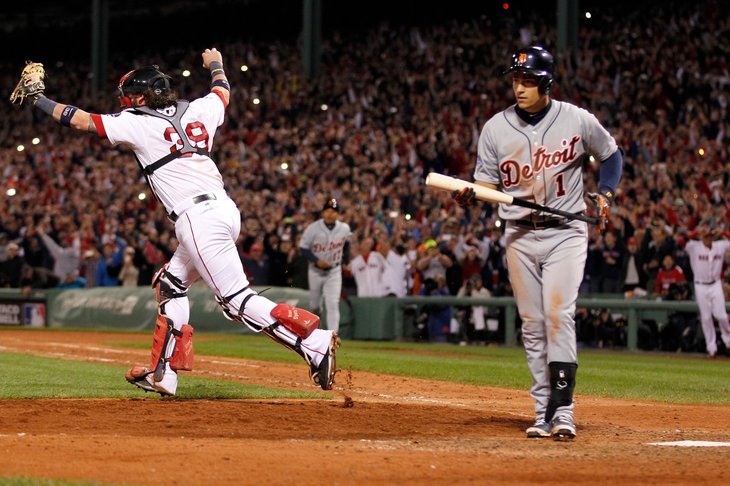 The Red Sox are headed to the World Series! Here's Game 6 in GIFs

The final two players are grouped together for a couple reasons. First of all, they are another example of some scary young pitching that St. Louis' staff boasts. On top of that, they represent a major difference between the Cardinals and the Tigers. While Detroit had that amazing starting rotation, their bullpen was extremely vulnerable, and the Red Sox hitters took full advantage of that. They won't be able to do that so easily in this round, though, as St. Louis can throw out talented reliever after talented reliever. The group is led by these two young right-handers. Rosenthal is the ace of the relief corps, serving as the team's closer. A 23-year old, he throws in the upper-90s, and struck out 13 batters per nine innings this season, and 12.5 per nine in the postseason. Since he came up the minors as a starter, he is able to pitch multiple innings, recording more than three outs 12 times in the regular season, and in four postseason games. Even with those huge strikeout numbers, he is able to keep the ball on the ground and in the ballpark, while also limiting walks at an impressive rate for a young strikeout pitcher. While Rosenthal first came up last season, Martinez spent much of this season in the minors, making 16 starts between double- and triple-A this year. Another fireballer, he had an average velocity of over 97 MPH on his fastball this season. His regular season ERA of 5.08 may look bad, but his 19.4 percent K-rate and 7.3 percent BB-rate suggest that he was more than fine as an inexperienced 21-year-old. He's stepped up his game in the postseason, too, allowing two runs in 6-2/3 innings while striking out six with just two walks. The Cardinals bullpen is good and deep, even beyond these two. However, if the Red Sox are going to continue this amazing run in the same fashion they did so in the ALCS, they're going to have to hit in high-leverage situations against these two young fireballers.

The Cardinals are an extremely deep team, and they are led by established superstars who will receive a ton of attention in the coming days leading up to Game 1. However, guys like Carpenter, Wacha, Craig, Rosenthal and Martinez are also going to play massive roles in this World Series. They each bring a scary skillset that will challenge this Red Sox team. If Boston wants to win it all this year, they are going to have to figure out how to slow down these five players.