This is one of those "have to give it to somebody" awards. Koji gets the nod by virtue of having done the most work out of the bullpen, and being, relatively speaking, the one constant feature of the four winning games. But, I also can't think of any one candidate who clearly deserved it more than Koji. The problem has been the same one that will plague the Sox in the AL MVP vote—this team is not reliant on any one guy (that, and the fact that Miguel Cabrera has clearly earned it this season). 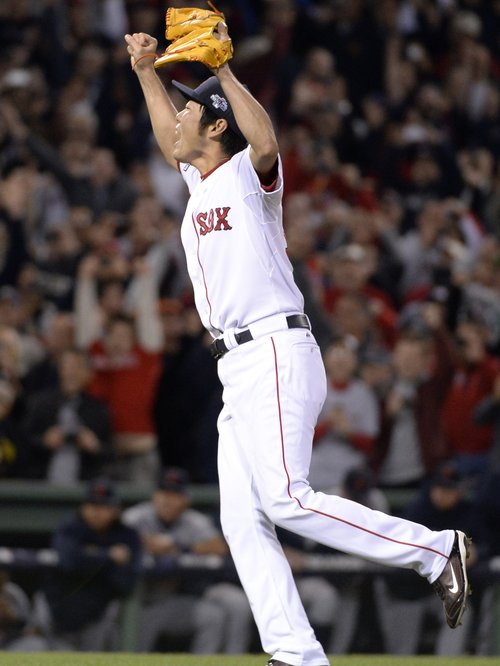 Yes, David Ortiz is Señor Octubre, and can still change the course of a game with his bat. But you could also cite Jon Lester's amazing performance, which was tarnished only by virtue of being on the wrong end of a 1-0 game, or John Lackey's masterful performance in Game 3. Still, I think Mike Napoli makes just as compelling a case as Koji, if perhaps not more so. While Koji Uehara was outstanding at keeping the runs off the board, he really doesn't come into Games 3 and 5 if not for Napoli's home runs.

Personally, I would have just said screw it and just say "The ALCS MVP is the whole damn team." They couldn't have done it without everybody's contributions.

2. Is Workman Climbing up the Bullpen Ladder?

John Farrell brought in five relievers into Game 6: Franklin Morales, Brandon Workman, Junichi Tazawa, Craig Breslow, and Koji Uehara. Of the five, Workman had arguably the toughest assignment of the night: to clean up Franklin Morales's mess and to stop the bleeding in the sixth inning. Ironically, though, Workman was also the only Boston reliever not to get a "stat" for the game: Morales picked up the ignominious "blown save"; Tazawa pilfered the "win" on one out's worth of work; Breslow was credited with a "hold"; and Koji of course got the "Koji"—er, I mean a "save." Workman's yeoman's efforts got him a big old nothingburger on the night. It doesn't seem right: just one more of the cruel injustices of baseball statistics.

However, what is surprising is to see how heavily Farrell leaned on Workman, and the relatively surprising circumstances associated with it. In Games 2 and 4, he came in after the horses had seemingly already fled the barn, and was more or less doing mop-up work, although he did it very well, not allowing any runs and only one hit and two walks in three innings of work.

But Game 6 was a different beast. The Sox were not down five runs when Workman was brought in. This could have just as easily been time for Breslow to go one to two innings, then turn things over to Taz and Koji for the eighth and ninth. This was as pivotal a moment as any Sox reliever has had to face this year. And yet, under the circumstances, Farrell elected to bring in his rookie, and the decision (like so many others this year) paid brilliant dividends.

The big question will be to see if we see more of Workman when the Sox are ahead in games. If so, this is a strong sign that he really has made his way up the ladder, and can join Breslow, Tazawa, and Uehara in anchoring the back of the rotation. On the other hand, it's also a question of what Workman's long-term role will be: is he a reliever, or is he a starter? I think the jury's still out on that. But it'll be one of the more exciting questions as we go forward into the World Series, and into next season.

Please shut up about the beards.

Yes, I get it. It's a cool and funky thing the Red Sox are doing. It's a part of their "personality"—and even players like David Ross have started to anthropomorphize the beards. But, at a certain point, you get to the point where I don't need to hear you guys ask 37 questions per day about the beards. There are lots of other questions that you can ask about: What's it like being in the postseason after a long absence? What are the challenges of facing a rotation as good as the Detroit Tigers'? How are your teammates helping you prepare for each game? There are a million possible questions you could ask—and yet I swear it feels like every fifth question or so has to be about the beards, and I'm pretty sure that there's some sort of peer pressure in the media. It's almost like the first person who has an interview with a Red Sox player and doesn't ask about the beards will be sentenced to a fate worse than death—perhaps they'll have to cover the Houston Astros (or worse, the Tampa Bay Rays).

But, seriously, it's gotten to the point where it's wince-worthy. You can almost hear the gears in the reporters' brains turning, trying to figure out "How can I work the beards into the interview?" Just stop it. All you're doing is running what was a fun and harmless story into the ground through ubiquity. America doesn't care about "The Siesta" and "The Hawaiian"; let that be for Red Sox Nation.

OK, I get that there was probably a very good reason why Jonny Gomes started four games in the ALCS versus Daniel Nava's two. But that reason cannot be intangibles, and it's also definitely not "defensive prowess." If Gomes were really the better defender, why haven't we seen him play in right field this year? And the highlight reel catches are not a sign of superlative defense; it's a sign of being out of position and having relatively poor instincts. Compare Gomes to Shane Victorino or J. D. Drew, and the results are not favorable to Mr. Gomes (but then again, that would also apply to any one in the NavaCarGo group).

The only thing I can think of is that it was a specific response to the pitching style of the Tigers that prompted this decision. You can't even really claim baserunning expertise as a legitimate reason, since the extra experience and understanding that Gomes might bring is probably outweighed by the fact that Nava gets on base so much more often.

So, a request to John Farrell: Please put Nava back in the lineup where he belongs. Let Gomes go up against the tough lefties. But if there's a right-hander on the mound, it's Nava who should be getting the start.

I'm pretty sure that I will be unable to survive the postseason in full possession of my sanity, let alone normal bodily functions. It's already clear that my subconscious—at least the part that wasn't gutted by the trauma of the 2003 ALCS Game 7—is out to get me.

Because of the time zone issues, I can't really stay up for the postseason games, unless they have daytime starts. (I can't be up from 2:00 until 5:30 in the morning when I need to be at work by 8:00 am. It's just not possible.) But it also means that I can catch the tail end of games, when I can get up early enough. So, I was certainly in bleary-eyed WTF mode seeing that the deciding ALDS Game 4 was still in progress when I got up a little before 6 o'clock. Of course, that moment lasted until my brain helpfully supplied that the Sox were facing Maddon's Rays, which meant that Maddon had probably gone all Oprah in his bullpen usage. ("You face a batter! And you face a batter! EVERYONE FACES A BATTER!")

As I mentioned, though, my brain has been playing tricks on me—and was using the ALCS as its means of getting me to wake up. This is decidedly not a good thing: it usually means that my brain has conjured up an impossible scenario, or at least one so horrifically repulsive that it forces my brain to reject the scenario, and wake up in the process.

So what have I been tormented with? Well, the morning of Game 5, my brain decided that I should be treated with articles about how the Tigers were pumped to be in the World Series after winning Game 5. (Yes, I know, not possible.) But it got the job done—I woke up almost in a cold sweat. And Sunday morning? That was even more "entertaining." My brain decided it would be fun to torment me with the thought of a Clay Buchholz implosion, giving up nine runs in the first inning. Lovely way to start the morning.

Luckily, checking my email inbox proved that my brain is a lying liar who lies, as the top email in the box was "That was awesome!" from my fellow OTM miscreants writers.

But this is convincing me that this World Series is very likely to do me in once and for all. So if all of a sudden my writing becomes particularly incoherent and takes on a special frothing-at-the-mouth character, at least you know what happened.

In the meanwhile, though: Go Sox! (If I'm going to lose my mind, I at least want a World Series win out of it!)