Have you heard of the MLBPA Players Choice Awards? If not, there's a good reason for that.

Share All sharing options for: The MLBPA hates John Lackey

From the All-Star Game, to the MVP, to the Golden Gloves, baseball has no shortage of honors to dole out, and no shortage of controversy to cause by consistently doling them out to the wrong people.

Some of these mistakes are up for debate--God knows Miguel Cabrera vs. Mike Trout and the question of whether an MVP can come from a non-playoff team will never get old*. Then there are...others. Like Derek Jeter taking home so many Golden Gloves despite being an absolute disaster at shortstop, or to show we're not just hating on the Yankees, Justin Morneau taking the MVP over Derek Jeter in 2006.

I'll give this to the voters: they're not so bad as they used to be. Fred Lynn losing out to Don Baylor in 1979, for instance, is some kind of travesty, and not just because it's a Red Sox player getting screwed over. While too many voters are still hesitant to embrace advanced metrics or, y'know, the existence of defense, they at least have woken up to the fact that there's a world beyond RBI, HR, and SB.

But if the voters of the Baseball Writers Association of America have wisened up, it seems the players themselves are lagging far, far behind. Even though they cover all the same stuff, there's a reason that you hear about the BBWAA awards all the time, and almost never hear about the MLBPA's Players Choice Awards. And I can think of no better example than this:

Here are his qualifications:

Let's go down the list of our three candidates:

Mariano Rivera: A pitcher who was great, missed a year due to injury, and then came back and was slightly worse but still great. We've gone over the argument for Lackey over Mo before, but this award and its BBWAA counterpart does seem destined to go to him because voters are suckers for the story of the retiring Mariano, and if the Red Sox are getting raked over the coals for not kowtowing deeply enough, that kind of tells you what the mood is like.

Victor Martinez: A DH/C in decline in 2011 who missed 2012 due to injury and has returned to have an entirely mediocre, even untenable bat for a DH in 2013. If V-Mart was still pretending to be a catcher, his 111 OPS+ would be quite nice. For a guy who only played 36 games in the field, though, and most of them at first base? Well, it grades out to a 1.2 rWAR and 0.9 fWAR. Martinez "came back" to have pretty much the worst year of his career, to the point where you could almost argue him as a Comeback Player of the Year candidate in 2014 if he managed to find his old bat again.

Scott Kazmir: And this is where we really just get silly. Yes, Scott Kazmir has been a non-entity for longer than Lackey, dating back to 2010 rather than 2011. But after missing 2012, Scott Kazmir has returned...to produce a 93 ERA+. That means his results have been seven percent below league average. 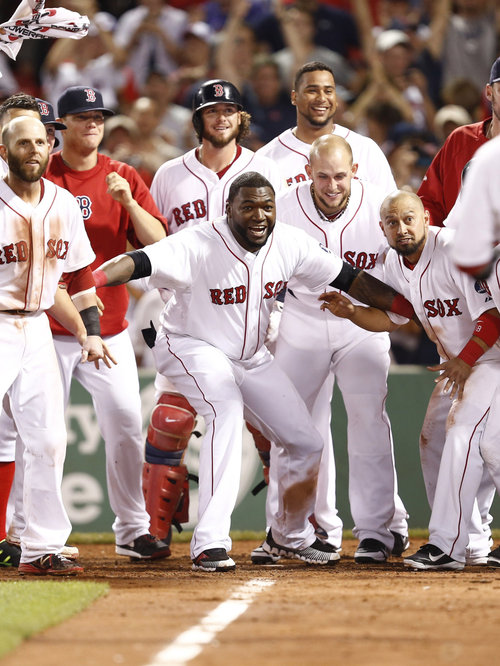 The MLBPA would just choose Jeter.

And here's where we come to a crossroads. At this point, Scott Kazmir's selection is still entirely defensible, because he's actually pitched much better. A 3.36 xFIP produced by a K/9 of 9.23 and BB/9 of 2.68 are actually very good, with a depressing Cleveland defense likely to blame for some of his problems. By WAR, Lackey still leads, and by a decent amount. But that's only because he got through more innings, again likely thanks in part to his defensive advantage over Kazmir.

The problem here is that there's no way to reconcile this choice with Victor Martinez. Not unless we've regressed so far that award voters are docking Lackey significant points for a 10-13 record stemming from Boston's strict refusal to score behind him for weeks at a time. Victor Martinez' inclusion in consideration cannot survive any sort of serious statistical scrutiny. He simply wasn't very good. But only serious statistical scrutiny can so much as put Kazmir in the conversation, at least when compared to Lackey.

Now to wait for the BBWAA to do the same.

*Which is to say it was old before Mike Trout debuted. Probably before Cabrera did.